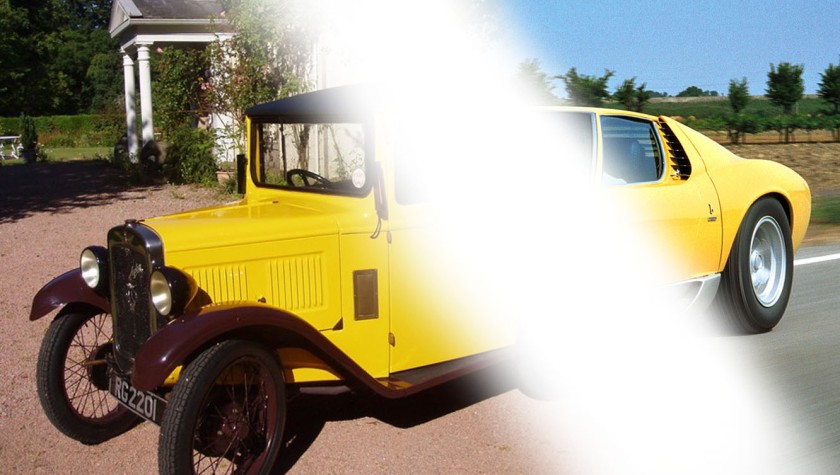 My French teacher at grammar school, Mr Roberts, had a small collection of Austin 7s from the 1920s, which he alternated using as transport to work. I think that he considered me a bit of a prat (history might have vindicated him on some levels, certainly) and, sensing this, I reciprocated with contempt for his collection of little, old and, at the time, very cheap cars. In hindsight, I might have had a more rewarding time discussing the niceties of the Ulster, Ruby, etc with him and he might have decided that I had some redeeming features. I deeply regret my glib teenage contempt, though it was entirely my loss. He was right, I was wrong.

END_OF_DOCUMENT_TOKEN_TO_BE_REPLACED

Many thanks to Eoin for his kind mention below of my recent little volume on Sir Basil Milford-Vestibule.

I’ve been putting away the research material of late and was leafing through the long out-of-print autobiography of Len Brik, who will be remembered by many of us longer serving types as the charismatic Chief Engineer at Victory Cars.  Following the merger of Victory Cars with Empire, he came into close rivalry with Sir Basil. Len was entirely self taught and there was mutual loathing between the two men.  Sir Basil is usually reported as referring to Brik as ‘The Blacksmith’, though more exactly he used the phrase ‘The Blacksmith’s Dull Apprentice’, whilst Brik returned the compliment with ‘Sir Beryl’. END_OF_DOCUMENT_TOKEN_TO_BE_REPLACED

I had a ‘Ring obsession for a short while and trawled for various videos. There are the obvious ones that put you in awe of other’s skill, either flat out driving with Walter Rohl or the sight of Sabine Schmitz taking passengers round in the ‘Ring Taxi, chatting to them as though she’s on a country drive whilst effortlessly dispatching day-pass, would-be Ringmeisters.  The nicest I found was an early morning video of an unidentified driver in an Elise, top down, no gloves, driving fast but flawlessly on a near empty track, the dew still drying off.

The most memorable of all, though, is this.  Somewhere, we are assured that no-one was seriously injured, which I hope was the case, but is pretty miraculous.  If anyone out there has ever wondered why it is so hard to find a nice Fiat 850 Sport these days, here is the answer. Cars have come a long way since then, thanks be.

Simon A Kearne’s long awaited biography of Sir Basil Milford-Vestibule is well overdue. Keenly awaited by enthusiasts of engineering and knitting alike, this comprehensive overview of an almost-legendary engineering genius and his lifetime’s work as chief engineer of The Empire Motor Company.

Kearne, (who requires little introduction), was granted unprecedented access to the Milford-Vestibule archive and through painstaking research, has crafted a biography as maddeningly eccentric as the subject himself; a book, one can’t help feeling, Sir Basil would have berated publicly but secretly adored.  END_OF_DOCUMENT_TOKEN_TO_BE_REPLACED

I am a cry from beyond the pale. I have spent all my driving years reining in my hooligan element and, for much of the time, it has been my personal circumstances, rather than my self-control, that have prevented me from totally inappropriate purchases.

The first Audi RS6 Avant really fulfilled a long-held fantasy for a big, very fast, estate car, marrying the hooner with the homely. Lately, the AMG C63 Estate has taken my fancy, and I now see that they have produced a more powerful version, addressing the problem of the standard model’s woefully inadequate 451 bhp.

END_OF_DOCUMENT_TOKEN_TO_BE_REPLACED

Seeing a Jaguar XJ hearse on the Westway a few weeks ago, made me realise that modern design does not adapt well to the production of a dignified funeral wagon. Consider Coleman Milne’s latest offerings based on Mercedes and Ford base vehicles. Try getting out of those back doors with your top hat in place.

END_OF_DOCUMENT_TOKEN_TO_BE_REPLACED

There was a nice feature on the Voisin C7 Lumineuse in The Automobile (publisher Mr Doug Blain – late of CAR) a couple of months ago.

It was a very boxy car, so much so that it even came with extra boxes attached. Distinctive, for a car of that era, and contributing to the name, was a full width rear window, and Voisin apparently had to work hard to get people to accept the need for decent all round visibility. He’d have the same problem again today. With a few notable exceptions, I don’t spend much time admiring Vintage machinery, but I rather like this.

Although the C7 is one of Voisin’s more conservative designs, particularly technically, Gabriel Voisin, as much as Andre Citroen, could be seen as the godfather of the classic Citroen. Andre Lefebvre, the engineer behind the Traction Avant, 2CV and DS, worked for Voisin both as an engineer and a competition driver throughout the 1920s, and developed his innovative and uncompromising approach under Gabriel Voisin’s leadership. Compared with its contemporaries, the unfussy nature of the C7 might also be seen in the Traction.