What is the future for Car Manufacturing?

There have always been cases of re-skins creating ‘different’ vehicles; and indeed VW Group have become masters at doing this in-house. But between independent brands this has usually been discreet and car companies have remained proud of their ability to manufacture the oily bits, as in the example of the Vauxhall salesman who once vehemently denied to me that the diesel in an Omega was manufactured by BMW. You might have thought he’d use that fact as a selling point – but then he’d probably also have denied that the rest of the car was made by Opel. However, this can’t last.

Collaborations have existed for many years. France was one of the most visible pioneers with the Douvrin engines shared between Renault and PSA, two apparent competitors who realised that what was hidden out of sight under the bonnet didn’t interest the average punter. Nowadays though, they are becoming more and more common.

Opel share with Fiat, Fiat share with Ford and have shared with Citroen and Peugeot for some time, not to mention, of course, Chrysler and, by association, Daimler Benz who themselves now share with Renault who have shared vans with Opel for ages and so it goes on. But generally these are finite and limited liaisons of convenience where each company probably tries to convince itself that it is the prime mover.

How long before the industry is forced to dump this false pride and admit that its continued existence lies in superficiality. Exploit the power of the brand, but keep the overheads low. They used to say that you’d see today’s racing developments in tomorrow’s road cars. So what’s going on in racing today? Rationalisation and cost savings of course.

Look at the perceptively named ‘Car of Tomorrow’ introduced a few years back for Nascar Sprint Racing in the States where dimensions, shapes and mechanicals are so prescribed that the main difference is in the decals. How long before more of the GP2 one size fits all concept filters up into Formula One? Would anyone really mind, as long as they got the publicity? After all for years various major manufacturers have competed with cars essentially developed by completely independent companies, and now Group Lotus is doing it shamefacedly. 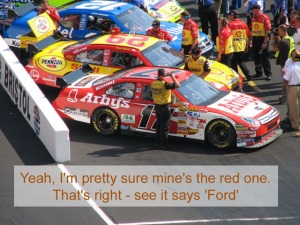 Does the average punter really know or care where their car actually comes from, and even more relevantly, do they really notice the dynamic nuances between, say, an i30, a Bravo, a Megane, an Astra, etc. You might, and I might though, after a long day, as long as it gets me home in comfort how much do I really care? But for many people, the mechanicals of the car are a mystery that they have no desire to have illuminated – remember the sight of BMW 1 Series drivers with snow socks on their front wheels?

They might have a preference as to whether the ride is hard or soft, and whether the engine sounds ‘sporty’ or ‘refined’, but nowadays these things can be tuned at the press of a button. These non-petrolheads aren’t all idiots, they are the majority, and many of them are perfectly competent drivers, they just don’t care that much and, if you were to tell them that by having common designs and shared manufacturing bases, the cost to them of the average hatchback could reduce by, say, £1,500, they would vote with their wallets.

My own wristwatch is an extravagance, a plastic Casio WaveCeptor which, at £69.99 is the most I have ever paid for a watch. It keeps perfect time and is solar powered, good for 100 metres, as well as doing a host of other things, and it is all that I need or want. My personal opinion of too many high-end Swiss watches is that they are flashy tat, as subtle as a wodge of £50 notes sticking out of your flies, but the one thing that I agree makes them attractive is the knowledge that there is a piece of classically pure, elegantly designed, precision engineering, made by the best craftspeople, hiding inside that ugly piece of 24 carat hanging off your wrist. What did surprise me was learning that certain of these classy manufacturers buy the mechanism from a common, high-quality source, just producing the case, strap and face themselves. Do the customers seem to care? Apparently not, so isn’t this the way the car industry should go?

On a modest scale, although I think originally they hoped it would take off better, Lotus achieved this by offering the revolutionary chassis system from the Elise to other manufacturers. In the end it just seems to have resulted in the Opel Speedster and the Tesla Roadster. The drawn out death throes of Rover Group of course involved re-skins of Hondas and, more prophetically maybe, Tatas.

The Aygo was likely entirely a Toyota design, co-funded by PSA with minimal re-bodying to become both a Citroen and a Peugeot. And then of course there is the Aston Cygnet, whose demise has been announced, but which still might point the way. 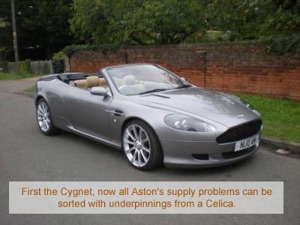 What will happen when a Korean, Chinese or Indian manufacturer develops and starts hawking around a modular family car system where the ‘character’ of the car can be easily defined by software tweaks and all the client manufacturer needs to do is to clothe it, furnish the inside and stick on their badges? Fiat, GM, Peugeot and the rest – is that your future? And why stop there? The same can happen in the premium and sports markets. Actually, it’s being going on there for ages, with companies like Bitter and, nowadays, Carlsson with their re-bodied Mercedes and it has been normal practice in the coach and motorhome industries for decades.

For us enthusiasts, I don’t need to list the disadvantages. But what about the advantages? Anyone who has ever had to wait several weeks for a particular part for a particular car will love being able to pop into a nearby Ford dealer to get a new set of front discs for their Golf and, with development costs spread so wide, costs will tumble.

The US and Western Europe cannot produce cars as cheaply as ‘emerging economies’ – actually I think that we’ve noticed that they’ve emerged by now – and, as Kia and Hyundai have proved in a very short period, the time for the established manufacturers consoling themselves with patronising ‘monkey see / monkey do’ platitudes is long past.

Do I want to see this? Personally no; of course the car nerd in me likes the idea of all the little differences, but it’s disappointing that so many of the differences these days are so little and, thinking objectively and responsibly, this has to be the future.

Or maybe that’s only half way there since, with a walk-in 3D printer at the local copy bureau, you will just order the shell direct from the warehouse on the net, then fit your own design of panels. We’ll all be car manufacturers then.

2 thoughts on “What Lies Beneath?”