We’re not still sticking lights on the front of our cars, are we? Time for some fresh thinking perhaps.

Modern life isn’t necessarily rubbish, but on balance, it is somewhat disappointing. Not just the gnawing pointlessness of so much of it, but the nagging sense that the brave new world we were promised back in the 70s has decisively failed to materialise. Because laying aside for a moment the jet-scooters, orgasmatrons and robotised dogs we were all expecting to enjoy, there remain aspects of the motor car which really should have met the rendezvous with the eternal.

Take headlamps for example. After more than a hundred years of almost constant automotive development, surely we could have come up with something better by now? Headlamps, despite the increasingly expensive and complex structures that now house them remain basically the same thing they’ve always been.

An incandescent bulb, nestled within a series of reflectors. Of course they’re now termed ‘jewellery’ and form an ever-expanding swathe of the nose section of a given car. They have become just another trinket in the designer’s toolbox of styling tricks, so when I’m told that Jaguar designers were inspired by the TIE Fighters from the Star Wars movies in the design of their latest XF’s headlights, I’m unsure whether to pat them on the shoulder or reach for the sick bag. Anyway, by now, surely headlamps should be tiny – or simply not there at all? 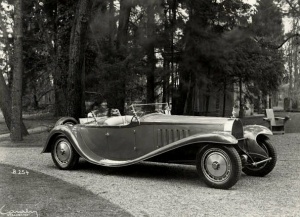 Certainly, headlamps have been eschewed at various times in the past. Perhaps the best known and most flamboyant example being Armand Esder’s Bugatti Type 41 Royale – possibly the most profligate car ever. Despite being the size of a sizeable chateau, it was a strict two-seater and because the eccentric Dr Esders insisted upon driving only during the hours of daylight, it was never fitted with headlamps. Frankly to my eyes it looks slightly unfinished – (if rather wonderful) – but that is only because my visual education has narrowed me to the hegemony of headlamps.

Perhaps salvation is finally within our grasp. Engineers at Daimler-Benz’s Untertürkheim skunkworks have apparently come up with something they delightfully refer to as ‘Improved Night’, which admittedly suggests something a little more racy than the prosaic aim of enhanced night vision. What exactly is ‘Improved Night’ anyway? It’s not as though they had found some ability to bend light itself – although being Daimler-Benz, I imagine they could if they really set their minds to it.

Flippancy aside however, surely the provision of radar assisted guidance should ultimately negate the necessity for anything other than aviation-style running lights as a means of being seen in dimly lit areas. The guidance assistant will determine your path, the sat-nav your route, while sensors will scan the road for pedestrians, cyclists and small furry animals, leaving you more time to work on updating that social media profile. 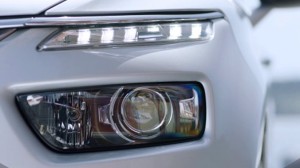 Meanwhile however, we appear to be  stuck with headlamps, at least until such time as we all have improved night assistants of our own – (inset your own amusing quip here…) I suggest a moratorium on excessively florid headlamp design – maybe even a tax on the most overwrought offenders.

Perhaps Citroen’s use of really thin slivers of lamp on their newest models will catch on sufficiently to start a trend, because quite frankly, if I’m to be denied a robot dog, this is the very least they could offer me.

4 thoughts on “Theme: Headlamps – The View Ahead”