The Lancia Delta nameplate deserved better than this. 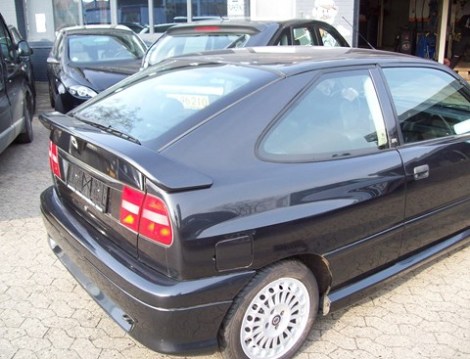 The first Lancia Delta (1979 to 1994) was two things. It was an neatly uninteresting, Italdesign five door, front-drive car of little obvious merit. And later in life the same car was a high-performance sporting hatch. From 1993 to 1999 Lancia tried to cash in on the Lancia Delta name with this iteration, sold (if it sold at all) in three and five door guise. The second version was a badly considered blend of the predecessor so it had moderately sporting capability and almost, but not quite totally bland styling.

It was a design which probably never had a strong theme, no inventive schtick or conceit to make it hang together. The iteration shown here was a more comfort orientated car than the sometimes rather sporty Delta that preceded it. But then again the Delta was initially just another modestly comfortable small car and this one is too. The thing is that Lancia didn’t know if they stood for performance or comfort or some mix of the two.

This car was hard for buyers to get and sold poorly. Yet it had little direct opposition. 1993 was long before Ford’s Focus, an easily digestible great car. The early 90s Ford Escort exuded indifference; the Astra was a little dull though far better styled* and the Golf very obvious and also rather boring. Alfa’s 146 and 145 seemed controversially styled. Only Google knows what Toyota and Mazda were offering. Perhaps the Peugeot 306 was the most compelling mid-sized hatch. So, you’d think Lancia could find a gap in such a market place.

But they were confused. And if Lancia was confused about the Delta (launched as a 3-door in 1995), so too is the vendor of this car who has it listed as a Lancia Dedra estate. And they have decided to photograph it at such close range that I suspect they couldn’t be bothered to move the vehicle out of the thicket of cars it was jammed in. They are not trying very hard to sell this one but are not, by Danish standards, asking very much either, just £4490, sir.

It has driven 160,000 km and is in superficially nice condition. However, the undercarriage will need a thorough inspection. This version is the 16V 2.0 litre turbo so it’s a quick little vehicle. If you can live with the strained design of the c-pillar and the odd reference to the Lancia Kappa’s rear light cluster you will have something more appealing than a Golf of similar vintage and engine size. Here’s the interior: 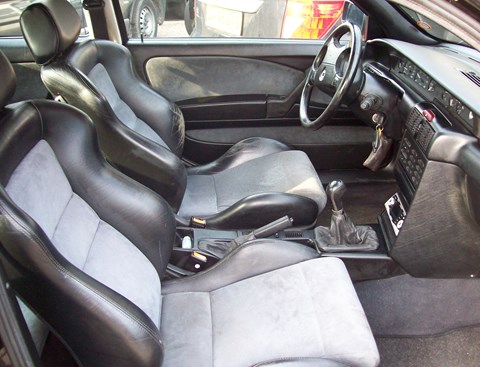 Thinking about this a bit more, the 1993 Delta was just one generation removed from the cars of the late 60s, the Fulvia saloons which were on sale until 1976. The Delta of 1979 replaced those and they were sold until 1994. So, the Lancia loyalist could buy a Fulvia in 1976, keep it until 1979 and get a Delta which they could than hang onto until 1993 when the second Delta was launched.

The more you think about it the more clearly you can see Lancia has had a very erratic product development history. Models have lingered too long, with the Delta having a 15-year life and the Dedra an 11-year run. That last one is astonishing as the car was out-paced from the year of its launch. And still, despite it all, we like Lancia.

*something of an understatement. Of the mainstream hatches, the Astra F (91-99) was far the most carefully styled and today wears its period style well. The detail design is very neatly resolved in a manner that simply needed better PR to sell it to journalists.

38 thoughts on “Something Rotten in […] Denmark: Lancia Delta”