We look for subliminal messages.

A few years ago, brand consultants Landor redesigned the Citroën logo to be more rounded and, in their words, ‘liquid’. That is a strange adjective, since the chevrons famously represented the helical gear teeth that André Citroën patented and whose success he built his company on. In their current form the chevrons no longer seem to suggest precise technology and, therefore, it could be argued that Landor has done its job well in capturing the essence of 21st Century Citroën.

Fiat are the consummate tinkerers to diminishing returns. Has there ever been a facelift at Fiat that didn’t spoil the looks of its predecessor? Why do they do it? Is it politics or lack of confidence? Around the start of this century, Fiat got through 3 logos in 7 years, ending up with something that tries to combine everything from its past. If a company finds it so hard to settle on a logo, what hope for an overall strategy?  Tellingly, the most minimal logo dates from Fiat’s most creative years.

The simplifying of the Rover badge on the SD1 was typical of the time. However, it said more about the state of affairs at Rover than it probably meant to. The SD1 was a commendable answer to a cynical brief, a Rover that was cheaper to produce and, despite David Bache’s flair and Spen King’s ingenuity, the cost cutting was all too obvious in the final result. In later attempts to re-establish a veneer of prestige to the model, there was a return to the more traditional badge, but no-one was ever entirely fooled. 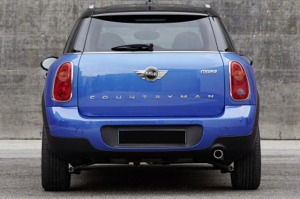 Since the original Mini existed in both Austin and Morris forms, there was never a simple badge identity for BMW to filch. Therefore, for the MINI revival, they resorted to that old staple cliche, the winged badge. It’s not a great design but, kept small, it is just about OK. However the huge thing on the back of the bloated Countryman is truly ironic, a ‘Kick My Arse’ sign for the convenience of all detractors. Someone at BMW has a sly sense of humour..

Volkswagen has always had one of the most memorable logos, which it is hard for even the pushiest brand identity guru to mess with. However, their secondary badging has varied. The body coloured badging of the 90s was interesting and I liked it but, for anyone who has had a car resprayed by a chancer in a railway arch, there is the inescapable feeling that someone forgot the masking tape. The die stamped graphic on the late 90s Polos was dire for too many reasons. Then someone had the brainwave of forming the lettering from a horizontal cylinder. On a chrome surface this gives a generous reflection, from road to sky, and looks very substantial. It is a simple trick, but a clever one, adding to the Golf’s reputation for solidity. 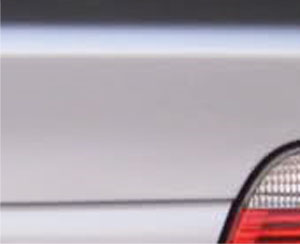 I believe that BMW invented the ‘Badge Delete Option’. In the 70s, it was suggested this was a way for the Geschäftsführer to underplay his choice of car in front of a resentful workforce which, given the discreet nature of German luxury cars of the time, might have been practical. In the status conscious UK, it was of course entry level BMW 316s that had that box ticked, in the forlorn hope that you might mistake them for something with a bigger 6 pot under the bonnet. In theory I like badge delete though, in practice, it can make differentiating the dawdler from the racer more difficult.

The recent, now unlamented, Maybach logo was a strange thing. It was, in essence, the same badge that had graced the pre-War limousines. Back then it seemed to complement the cars but, grafted onto the front of an oversized Korean taxi, it had as much class as the cap badge of the Maybachian Astral Commandos from a 1976 episode of Doctor Who. 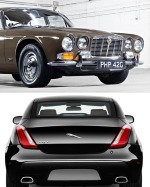 Mascots are not really badges. Although, perversely, the mascot endured for years on US Jaguars, it was American safety legislation that contributed to William Lyons incorporating the leaper in side wing badges, rather than a mascot, on the first XJ6. This worked rather nicely, and his willingness to do this, underlines that Lyons was certainly not the traditionalist that Olde Worlde Jaguar enthusiasts would like to imagine. But leapers should leap forwards, not sideways, and the transverse versions seen on today’s cars seem wrong. Does Jaguar really know where it is going?

History is full of redundant badging that brags of now commonplace technology. The ‘Disc Brakes’ badge on Mark 2 Jaguars was a nice piece of Bill Lyons trumpeting, suggesting the need to warn following drivers of the fearsome potential for retardation that vehicle possessed. I drive an old car that boasts of its fuel injection though, as it does so in French, the Eurosnob in me quite likes that. A quarter of a century ago, makers were finally getting engines to breath properly and, for any 4 cylinder, a badge proclaiming “16 valves” was mandatory though, again, I still quite like the Italian “sedicivalvole”. Today, alternative power sources are what gets the badge makers excited. 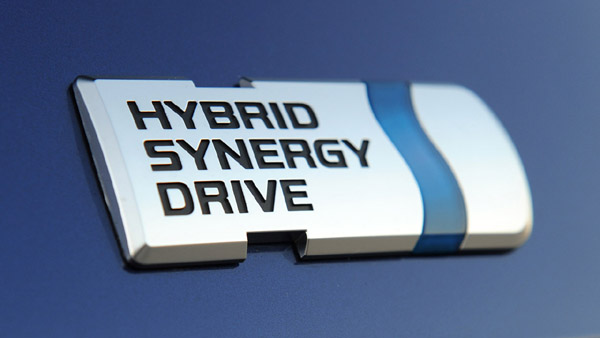 11 thoughts on “Theme : Badging – A Badge Can Speak a Thousand Words”