June’s Theme : The Editor Posts Some Thoughts on Speed 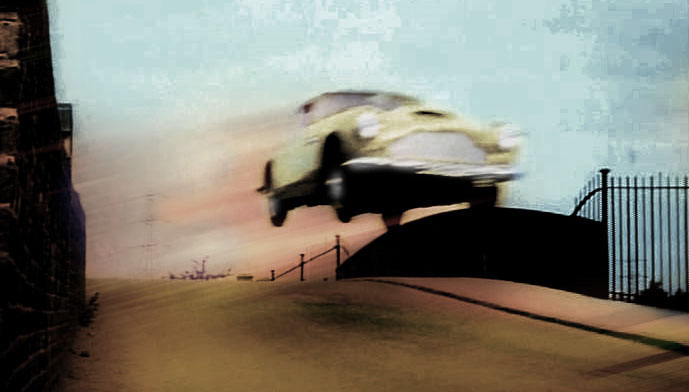 We get used to thinking that we, meaning whoever amongst us are young and fit enough to command the technology, are probably the best informed and highest achieving people in history. The knowledge and achievements of our forebears, though impressive perhaps in the context of their age, pales in absolute comparison with our own. Such is the arrogance of The Present and, though it might not have always been this way, it seems set to remain.

How we laugh at people fearing death on the first steam trains, with physicians predicting that a speed of 35 miles per hour might cause the body to stop breathing. And we suppress a grim chuckle at the thought that the first railway fatality in 1830 could have occurred with machinery capable of such paltry speeds. What sort of thinking hobbled development of the motor car in 19th Century England with ridiculous speed limits and the enforcement of the Red Flag act?

A little over 50 years after the repeal of the Locomotive Act, Stirling Moss’s average speed in the 1955 Mille Miglia was just under 100mph and, in places, he and Denis Jenkinson were approaching 180 mph which, advanced though the 300SLR was for its time, seems today to be a triumph of skill, bravery and benzedrine over technology and badly maintained roads. At the same time, a young person with sporting pretensions might buy themselves an Austin A30 and, with careful tuning, get its top speed up to 75mph, at which point they would be grinning insanely and praying they didn’t bend the pushrods. With more money, you could buy that sporting pinnacle, a Jaguar saloon, and achieve 110 mph, possibly.

Fifteen years after that, the fastest ever humans to date, astronauts returning from The Moon travelling at 25,000 mph, had no real impression of speed. Their adrenaline might have flowed for many reasons, but the scenery rushing past was not one of them. However, the first proper motor race, with the winner averaging 12 mph, had probably been quite scary at times.

In the later part of the Twentieth Century, physical speed became all important. Concorde was developed to transport literal high-fliers to transatlantic meetings.  There were tales of industrialists’ 300 kph autobahn commutes to work. These were important, or self-important, people and their time was valuable.   Now Concorde is just an elegant memory, but still the World goes on. How? Naturally it is the largely unpredicted huge increase in what is often called speed, but more correctly rate, of communication of electronic data. That important meeting in New York can be attended by you on your iPad on a beach.  People still want to travel but, bearing in mind the huge numbers who choose to, they end up doing it relatively slowly.  The World is round and, wherever you go, and however quickly you do it, you’ll most likely end up where you started. Has physical speed become redundant or, at most, just a leisure indulgence?

Today, racing cars are certainly potentially far faster than Moss’s, but the difference in fairly run-of-the-mill road cars is even greater. Despite the German industry’s voluntary capping of many cars to 250 kph, the number of cars that will approach this figure and, with relatively easy modification, far exceed it are legion. It’s getting rare for any car not to reach 100mph, and that is sensible. Cruising at motorway speeds, your engine should not be on the limit. But who really makes use of the speed potential of most production cars? From the 140 mph of an Astra to the 240 mph of the Koningsegg, these are figures that might be achieved very rarely in the ownership of such vehicles but, unless conditions are quite miraculous, not without some risk on populated roads; and that is without making any mention of various country’s laws.  These cars are only really exploited on track days or, more likely, in their owner’s fantasies.

So, what are your views on speed?  Is it a good thing or a bad thing? Does it have a future? Do you have fond or frightening memories of its past? Does the need for speed have a deleterious effect on the cars we buy? And how do you reconcile your general respect for society’s laws with your frequent disregard for its speed limits? That last one is addressed to you Sean.