Spare a thought for the Isuzu Vehicross. Isuzu revealed the Vehicross as a concept at the 1993 Tokyo Motor show and the production car went on sale in 1997. Who thinks about it today?

The Vehicross survived for four years until 2001 and has sunk without leaving very much of a trace. However, it merits a second look. In 2013, Michael George at Jalopnik wrote : “Let’s check off all the ways the Vehicross is a unique snowflake in the most boring automotive landscape of all. A design that still seems futuristic today? Check. It comes from a much-beloved dead brand? Check. Sophisticated all-wheel-drive technology that makes it a highly-competent off roader? Check. General mechanical toughness? Check. Rarity? Check. Always designed to be a one-run niche vehicle? Check.” For this reason he sees it as future classic. If you want one, look here  where a 1998 with an absurd 3.2 litre engine is for sale for £6500. That´s not a lot of money for a rather interesting motor car.

While crossovers today are just another class of car, the Vehicross broke new ground and did so with remarkable élan. The styling remains fresh and interesting and it´s remarkable it seems to have had no successors. Perhaps this is an example of a car

with so much character, none could be rubbed off onto another design without homage being mistaken for plagiarism.

Looking at the form language, the impression is of robustness yet the character of the lines is smooth transitions. The lower body is demarcated from the upper by a smoothly 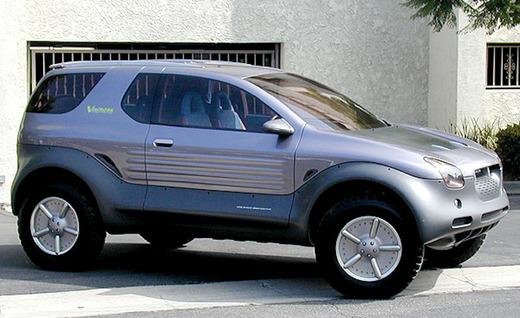 marked boundary running around the car. The lamps have a slightly vertical orientation, rounded without looking cute. Despite the strongly expressed character, it remains rational, deviating from the engineering minimum in a very controlled way. Often such deviations seem contrived and excessive. In this case, it manages that compromise between effectiveness and accent flawlessly. This is not my type of car but I feel it´s a superb example of a show car making it to reality with its soul intact. Alas, the interior is rather ordinary but I think I can forgive the car for this, such is the originality of the exterior.

For Isuzu, the praise heaped on the car´s style (articles in Car and Car and Driver, for example), meant nothing for sales. Isuzu produced a remodelled Civic which they sold as a Vertex (partly covering the Vehicross´s production life) and the remaining passenger vehicles they produced thereafter were light trucks and SUVs. In total, they produced six further cars or light trucks since the Vehicross went on sale and are now a maker of commercial trucks.

The Vehicross´s designer, Simon Cox, has however survived. He is now the chief designer at Infiniti, having consulted for them at the UK-based firm, Futura. In the interim he conceived Cadillac´s art and science theme in the form of the 2001 Cadillac Imaj concept car. This theme has had a long run. Whether you like it or not, it has demonstrated considerable resilience and flexibility. And,further, Cox is an example of a designer being able to adopt the form language suitable for each car, rather than simply doing “his” car for different clients.