In some ways, the 1980 Ferrari Pinin is a mess. But some of its details inspired later cars, none of which were Ferraris.

The proportions work quite well but one gets the impression Pininfarina had a hard time with the details and with marrying a form language that wanted to be curved with an architecture that seemed rectilinear.

Hangovers from the old way are the very flat surface going from the rear wheel arch to the C-pillar. We discussed something along these lines in our series on the Jaguar XJ40’s gestation. The cantilever effect of the glasshouse was an advanced idea and is still in use today on the Suzuki Swift and looked superb on the lovely and lately departed Skoda Fabia. But Buick also used this idea on the 1991 Park Avenue, having only taken 11 years to get the idea from Italy to Detroit. If only they’d had the ‘internet’ then.

On the downside, Pininfarina didn’t resolve the way the roof panel over the windscreen is finished. If you look at the front-three quarter and follow the line from the top of the side glass to the top of the windscreen it wobbles or drops at the corner. Citroen managed it better on the 1989 XM which governs the line between the glass and roof using a plane.

Citroen (and Buick) used the glass a-pillar to achieve a smooth transition from the windscreen to the side glass. The idea hasn’t been much copied outside of GM in the 90s though. Finally, the boot’s slope and relation to the c-pillar seems to have inspired the Maserati Biturbo of 1981 (if there was enough time).

The 1986 Opel Omega makes extensive use of the Pinin’s flush surfacing character but adds relief at important places such as around the side glass. You could view the Omega as a properly realised interpretation of the Pinin’s hyper-flush style. For the 1987 Senator B (a criminally under-rated car) Opel borrowed the Pinin’s grille but made a better job of it.

The Pinin’s grille folds under the bumper line and the reflections of the chrome are lost. The way the headlamps and grille are treated is naïve and where the wing line passes under the a-pillar it looks like two shapes are at odds with each other. But this is what happens when a design is hurried and when it is built without the requirements of production in mind. 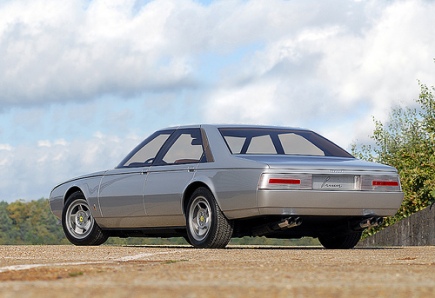 So, while in parts the Pinin is very interesting and provided ideas which others made better use, the overall car must be ranked as one of Pininfarina’s less seductive efforts, built though it was to celebrate the studio’s 50th birthday.

As a post-script, consider the 1979 Bitter SC, built on the Opel Senator chassis. This is a car inspired by the Ferrari 400i, but perhaps Ferrari repaid the compliment by ripping-off some of Bitter’s adjustments.