“BM-double-who?” In this transcription from a 1966 article, Archibald Vicar takes a close look at a questionable product from a struggling motor manufacturer from Bavaria. Can the 1602 really compete, asks a sceptical Vicar.

When Bayerische Motoren Werke invited us to a test drive near Munich we didn’t know what to expect. This obscure firm is still better known for their bubble cars than for ordinary family vehicles. For those of you unfamiliar with the name, BMW had a reputation for making fine motor cars before the second world war. Since then they have mostly made do with the manufacturing of Isettas under license.

So, having received a telex from Herr Gerst, technical director, asking us to inspect their new car we immediately had visions of folding my 6 foot 8 inch frame into a ball of plastic on three wheels and careening around like a slow ping-pong ball. The invitation nearly went unanswered, but Triumph had again cancelled one of their jollies (more strikes!) so we had some time to spare this month.

We took a Lufthansa flight to Munich and had such a good time with the complimentary champagne we nearly forgot to get off at the other end. Our problems continued when we couldn’t find a public telephone to let Herr Gerst know we would be delayed. Still, we arrived in a few safe pieces at BMW’s sharply modern factory and were introduced to their new baby. It has four wheels! But it only has two doors and is called the 1602, hardly the snappiest of monikers, methinks. The “16” refers to the engine size and the 02 refers to the number of customers we expect this odd box will find in Her Majesty’s United Kingdom.

Still, we shall try to overlook our scepticism. Over a hearty lunch of beers and Swabian noodles with creamy goulash (say what you like but the Jerries serve up fine nosh) we heard about the new car’s technical specification. The bit we can remember is that it is able to produce 80 hp and can propel the 1602 quite briskly. Out on the track and still the worse for the beers, we cantered around awhile. The snapper was so sozzled he managed to prang a car out on the second hairpin. I did rather better but still feel that driving with a few drinks is still the best way to test a car’s handling. You can learn a lot more by driving a car badly than driving like a maiden aunt, I say. 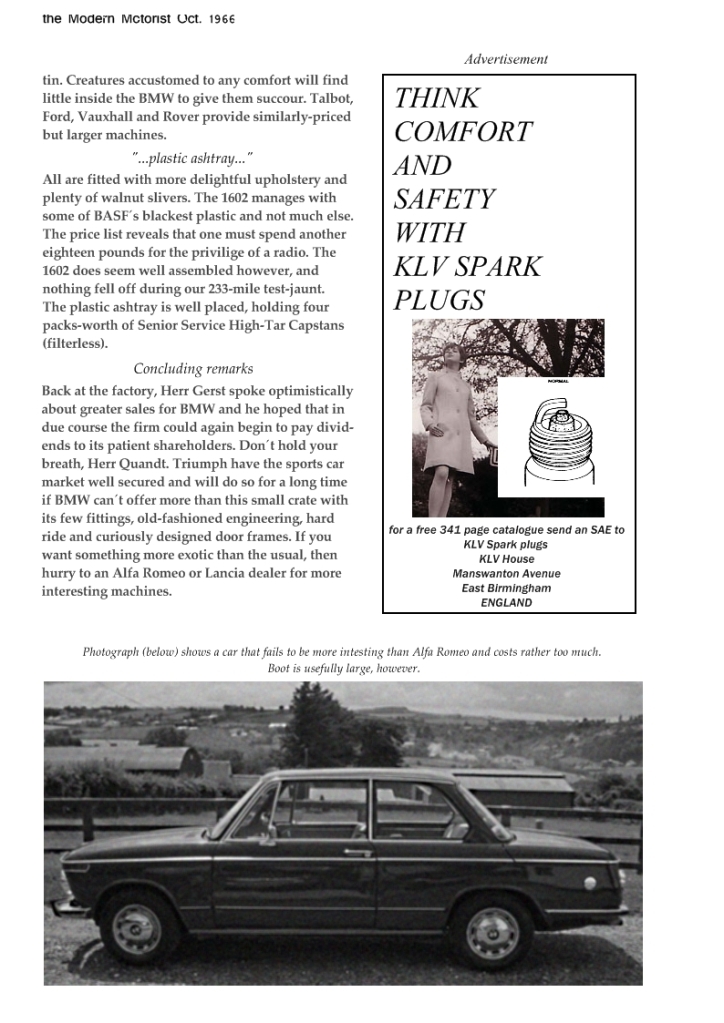 The 1602 has a 4-cylinder engine driving the rear. How odd to launch a small car but still send the power hindmost. Front-wheel drive is certainly the future. With little effort the little vehicle could oversteer, requiring armfuls of opposite lock to point the nose onto the right course. The brakes are discs up front and drums at the rear and seem to be pretty good at slowing down BMW´s little biscuit tin.

Creatures accustomed to any comfort will find little inside the BMW to give them succour. Humber, Ford, Vauxhall and Rover provide similarly-priced but larger machines. All are fitted with more delightful upholstery and plenty of walnut slivers. The 1602 manages with some of BASF’s blackest plastic and not much else. The price list reveals that one must spend another eighteen pounds for the privilege of a radio. The 1602 does seem well assembled however, and nothing fell off during our 233-mile test-jaunt. The plastic ashtray is well placed, holding four packs-worth of Senior Service High-Tar Capstans (filterless).

Back at the factory, Herr Gerst spoke optimistically about greater sales for BMW and he hoped that in due course the firm could again begin to pay dividends to its patient shareholders. Don’t hold your breath, Herr Quandt. Triumph have the sports car market well secured and will do so for a long time if BMW can’t offer more than this small crate with its few fittings, old-fashioned engineering, hard ride and curiously designed door frames. If you want something more exotic than the usual, then hurry to an Alfa Romeo or Lancia dealer for more interesting machines.