My credentials to write about the cars of Ian Fleming are mixed. 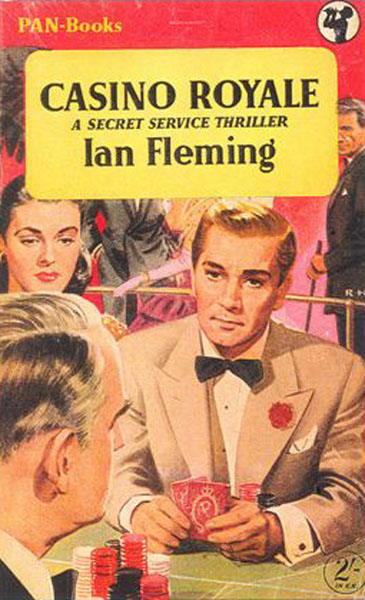 In my favour, I had read the entire canon of 14 James Bond books by the time I was 14 and I am, more or less, the same age as the very first Bond book. Against that I’ve never read them since, and that was a long time ago, though it’s a sad reflection on the state of my mind how much I still remember.

Ian Fleming was an accomplished writer of children’s stories. Some people forget that he wrote Chitty-Chitty-Bang-Bang, but his best kid’s stories were the ones featuring Commander James Bond of the Secret Intelligence Service. At 14, I was so seduced that I anticipated a life of breakfasting on scrambled eggs, ham and plenty of strong, black coffee following on with a day’s light indulgence in cold-blooded violence, rounding off with lobster thermidor, a ‘49 Montrachet chilled to 37 degrees, fresh alpine strawberries and, later on …

As I got older, the compromises that this lifestyle would involve caused me to choose another career and I fell out of touch with the literary Bond. Of course, I’ve seen a lot of Bond films a lot of times – they’re all rubbish and I imagine I’ll see them all again.

The only Bond to have captured the rather strong streak of masochism that runs through the books is Daniel Craig, but he lacks the hedonistic selfishness that accompanied that, which was best portrayed by Sean Connery. Following the success of Goldfinger and its main star, a gadget-rich Aston Martin DB5, the car became an essential part of any subsequent movie but, in the novels, that’s not really the case.

Ian Fleming was an odd sort, taking up literature as a way to earn a crust and his books are definitely constructed to please his reasonably cynical idea of a target audience, rather than to attain his literary ideal. The first ones were written at a time of austerity; the UK in particular, effectively bankrupt after two World Wars, had rationing until 1954, and even after that it took Britain a long time to get out of the parsimonious mindset that it had got used to.

As such, Bond seemed a wonderfully exotic character with his list of snobbish brand names and knowledge of fine living. In cataloguing this, Fleming didn’t make accuracy paramount, but whether that’s because he didn’t know, or just didn’t care, is uncertain. In Bond’s cars this economy with facts continued.

Bond’s normal transport were various Bentleys, always painted battleship grey. These were obviously ideal vehicles for a spy, since who would ever expect a civil servant earning £613 4s 6d a year to drive a Bentley? His first one was a 4½ Litre fitted with an Amherst Villiers supercharger.

By this I guess he means what was often called a Blower Bentley, a car that WO Bentley hated. The bodywork is described as ‘convertible’, not really the correct term for the rather rudimentary canvas protection on a Le Mans type Bentley, so we can’t really be sure whether it was fitted with some other bodywork in Fleming’s mind.

By 1953, when we first encounter him in Casino Royale, a 23 year old Bentley could probably be picked up pretty cheap, but Bond actually bought his when it was just 3 years old. Private means you see, that’s why he can’t be bought. A pre-Rolls era Bentley is a pretty unique machine, huge, torquey, a physical car to drive but not as ungainly as Ettore Bugatti’s bitchy “Fastest lorries in the World” quote would have one believe. The nearest thing in relatively recent times would have been an old-school Aston V8 Vantage.

Having been badly damaged and repaired in Casino Royale, that car is destroyed in Moonraker. Another thing that Daniel Craig’s film Bond gets right is that he’s a dreadful driver. To cheer himself up, Bond treats himself to a brand new Bentley as a replacement. Doesn’t M find this suspiciously flashy? Even that chap Kim Philby only drives a Humber. There’s a fair amount of low grade fetishism about Bond’s cars but it always reads to me like it’s come out of books, catalogues or tales that Fleming’s enthusiast friends have told him. He doesn’t seem to relish writing it as much as he does about food and sex.

He takes a break from Bentleys in Goldfinger, where he is given an Aston Martin from the Secret Service car pool, but still obligingly painted in Bond’s battleship grey. Fleming calls the car a DB III although, as all Aston Anoraks know, there was a DB3S sports racer, and a DB Mark III (a variant on the DB2) but, otherwise, the production cars skipped from DB2 to DB4.

In reality he’d have been lucky to blag a Standard Vanguard  from the pool and, more likely, he’d have had trouble putting his bus tickets through expenses, but fortunately we readers are spared the dour realities. Instead, following Goldfinger, he takes off for Europe in a car which, if not laden with gadgets, does at least have a few which inspired the film icon. But as for underwater cars, exploding cars and invisible cars, I shall be as thorough as Ian Fleming with my in-depth research, but am confident that I won’t be contradicted when I tell you that these don’t feature in any novels.

After this Bond reverts to his grey Bentleys in the shape of a special he has built on the base of a wrecked “Mark II Continental”, a vehicle unknown to Bentley historians. Is that the successor to the R Type Continental, the S1, which you could conceivably think of as the Mark II? Or does he mean an S2?  Except that was a V8, not a 6 cylinder.

In any case, he has it supercharged and a rather ugly sounding convertible body fitted. This doesn’t really play a great part in subsequent books, except in On Her Majesty’s Secret Service in a spontaneous race with his wife-to-be to Royale-Les-Eaux where Bond activates the red switch for the supercharger on the dashboard as he spurs the car forward, the scent of the chase of a pretty girl filling his nostrils (or some such tosh, as I said it was nearly 50 years ago).

The Citroen Dyane I drove in my youth had a red starter button on the dashboard and sometimes I couldn’t help but fantasise that I was on the Corniche heading down into Eaux-De-Bain-sur-Mer, the scent of the chase……. It did take me a while to grow out of it all.

Memorable among cars driven by others are the Lancia Spyder (Aurelia?) driven by Tracy in the race mentioned above, the Mercedes 300S of Hugo Drax in Moonraker (which Bond has to concede has the legs on his 4½ Litre, Goldfinger’s Silver (or really rather Gold) Ghost and the Studillac driven by Felix Leiter of the CIA in both Goldfinger and another book.

This last excited me since I had a fine plastic kit model of a 1953 Studebaker Commander Starliner whose Raymond Loewy Studio shape I found remarkably elegant and, coupled with the huge performance that Felix promised the fitting of a Cadillac V8 endowed it with, it seemed a tempting proposition.

The Studillac was certainly not a figment of Fleming’s imagination though, by the time he wrote of it, Studebaker’s own engines were delivering enough power to have made the conversions unnecessary. Also, Leiter’s was a convertible, which must have made for interesting handling when chasing Pussy (years of Bond film puns just won’t go away).

And, lastly, although I promised that Bond novels were fantastic car free zones, we come to Chitty-Chitty-Bang-Bang. This wonderful flying car took its name more or less (one Chitty) directly from the 1920s cars of a real heroic character, Count Louis Vorow Zborowski. Four aero-engined specials, built on Mercedes chassis, the Count both raced them and drove across Europe in them. Fleming is supposed to have known Zborowski as a young man but, as a teenage car enthusiast, I found this pillaging of names irritating and confusing though, as I’ve suggested, I don’t think the snobbish Fleming’s opinion of his audience was actually high enough to care that much.

Although lacking Bond’s private means, and so always on the lookout for a source of income, Fleming’s inclusion in his books of cars and brand names in general had little to do with the contemporary practice of product placement. The film DB5s that were wheedled, grudgingly, out of David Brown after Bill Lyons had turned Eon Films away from Jaguar’s doors were one of the first bits of such though, were he writing today, I’m sure Fleming would include a lot more expensive cars, and various PR departments would make sure he got the facts right.

As for Ian Fleming’s own cars, once the money from the books started coming in he had a surprising penchant for flashy Americans. He owned two early Thunderbirds, then a Studebaker Avanti.

Despite the usual suggestions that James Bond was Fleming’s wish fulfilment for himself, I feel that the equally snobbish Bond would have found this buying choice rather suspicious for an Englishman (“Bond reflected that the owner of the car was either a pansy or a pimp, possibly both”). The contradiction is apparent in the picture where a badge bar, more at home on a Rover or Daimler has been fixed to the Studebaker’s bumper.

Ian Fleming died at 56, prematurely old from living the Bond lifestyle. I’m not sure I’d have liked him, had I met him, and I’m certain he’d have found me a bit of an oik. But he cheered up a part of my youthful years, as well as those of many others.

5 thoughts on “Theme : Books – The Cars of Ian Fleming”