Having run out of James Bond books (see earlier post), I read this book as a teenager. It’s a well written adventure thriller, but with a narrative that’s very much of its time, presumably with an eye on the then burgeoning Ian Fleming / Len Deighton / John Le Carré market. Gavin Lyall was a crime and spy thriller writer and the husband of the excellent Katharine Whitehorn. He was known for his meticulous research.

What I have always remembered is that, central to a large section of the narrative, is a Citroën DS that takes on an almost heroic status as it takes the first-person protagonist across France. Its starring role was possibly inspired by the true life escape of French President Charles De Gaulle from an OAS assassination attempt in 1962 (see The Day Of The Jackal) where his driver exploited the DS’s unique suspension to accelerate to safety despite having its tyres shot out. This is supposed to have made De Gaulle so loyal to Citroën that he blocked an attempt by Fiat to buy the marque as well as commissioning a new Presidential limousine based on the DS. 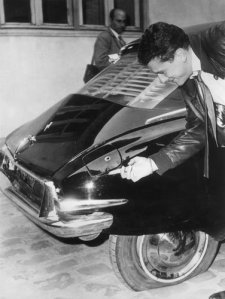 Following De Gaulle’s adventure, the Citroën was obviously the must-have car to use when on the run from pistol-packing hit men, so Lyall’s book sees the flawed hero picking up a DS in Brittany with the intention of driving the man he is assigned with protecting to Liechtenstein, whilst avoiding assassins and policemen. An Englishman who knows France well from his time working with the French Resistance, he gives us stay-at-home Brits a beginners guide to France, including its cars.

This is very much a traditional ‘man’s book’ of a particular era, using the rather laboured, Ian Fleming style system of listing things and adding extraneous detail in an attempt to make the adventure more convincing. Starting in Quimper, as the road trip unfurls, Lyall notes the near-new Michelin Xs.

He gives the hydraulically controlled inventory of the car commenting that “the thing has more veins in it than the human body”. He compares the front to “a partly opened oyster”. He lowers the suspension by two notches as the road unfurls. The trucks on the roads are Berliets, Somurs, Saviems, Unics. Gitanes are bought and smoked. Food taken on board includes Perrier, cheese, Marc, cherry tart. Guns – Mausers, Webleys, Walthers – are described in technical detail.

Strangely, Bond like boasts of topping 120mph are nowhere to be seen, rather there is mention of seeing 70 kph on the straights of a Route Nationale, pretty unremarkable for a DS, even on the roads of the time – I wonder if he was originally thinking mph and forgot to convert. Possibly that’s why, by nearly half way, we’ve only got as far as the Haute Loire, at which point an ambush using, incongruously, two flimsy Renault 4Ls as a roadblock, sees the Citroën smashed and riddled with bullets.

Our hero and his pals shoot some more people, survive and resurrect the DS enough to get them away from the scene until, having given its all, and haemorrhaging hydraulic fluid (which, being 1965, is conveniently blood-coloured, red LHS, rather than the later, green LHM), the bullet-riddled DS sinks to its final resting place on a deserted track.

The second half involves further progress in a discreet Rolls Royce Phantom II and more shenanigans with guns but, for the time, a surprising lack of sex. But I won’t spoil it for you and I’ll revert to the Citroën chapters.

As a teenage reader, by the time it had met its end, I’d already been seduced by the idea of this grande routière. For the first time I really sat up and took notice of the big Citroën. It was an interestingly different presence when encountered on holiday on French roads, and was seen, though less frequently, in the UK but, ultimately, I’d based my rather negative overall opinion purely on my nerdish schoolboy view of unimpressive acceleration figures and the fact that it committed the cardinal sin in British eyes of ‘being too clever for its own good’.

Now I saw that the cleverness had a purpose. Although, at least to this day, my SM has avoided the assassin’s bullets, I probably own it in part because of Lyall’s novel. Did other people notice – did this book, maybe in a more modest way, do for Citroën what Fleming did for Aston Martin? Or, conversely, did the car’s literary fate add to the big Citroën’s usually unjustified reputation for letting the driver down – literally?

Steve McQueen apparently owned the rights to the book, but died before it could be filmed. It’s easy to see how the autocentric plot might have attracted him, but would he have settled for a Déesse or would he have demanded something that made a noise and could get its tail out?