I am indebted to Eóin for drawing my attention to the repugnant excess of the Mercedes S-class interior.

This has led me to Japan to investigate their approach to boardroom-level transport. Helping me along the way was an article at The Truth About Cars about the Tokyo car show of 1995 and a live web-page showing Nissan’s offerings then.

Apparently the web-page is still live, having been left running in all its 1995 glory these last 19 years. One of the cars on the list was the Nissan President of which I had never heard. With this in mind and Eoin’s article freshly published I put the ideas together: if the Mercedes is bad, what else can a plutocrat get for similar money from Japan.

The Toyota Century is made in quite small numbers and is deliberately supposed to be very formal and reserved. Presumably it’s intended to be good enough for the Emperor of Japan but without being ostentatious about its size and expense. Nissan’s President has the same ambition but I think it is not able to claim a unique body as the Century can as some form of this shell is sold under the Infiniti brand in the US.

The dashboards of the two cars are as different from each other as they are from the Mercedes S-class. The Toyota says “I am above fashion.” It says this by genuflecting to car design as it was in 1988. This is a trope seldom seen in cars. I have seen old designs still in production but not passé shapes exhumed. That’s subtly different from retro-design, isn’t it?  Someone in Toyota has made the choice to design a dashboard as if it was from 1988 and then put it on sale in 1997. I like that thinking.

The Nissan President images here come from new screen shots of Nissan Japan’s website. However, Wikipedia alleges the President stopped production in 2010 when the F50 platform was retired. I assume Wikipedia is wrong here but I am not sure. The President’s is simply a contemporary Japanese large car interior. I like it more than the Mercedes but a lot less than the Century.  That’s not saying much either way. However, the President scores with its the astonishingly inviting rear seats. I had no idea anyone 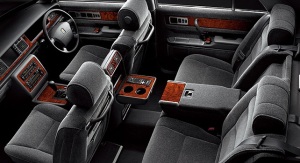 had the determination to make such overtly arm-chair like chairs in a modern car. Again, this is in contrast to the sober and neatly tailored grey velour that Toyota’s Century provides. I can’t quite tell which I prefer.

One must admire the confidence of the President and the reserve of the Century. If I was a plutocrat or senior bureaucrat, I’d feel less guilty about being driven about in the Century, I suppose. It’s comfortable but not greedily so. It’s almost like a very good rail carriage interior. The same goes for the dashboard: public transport at a really high level.