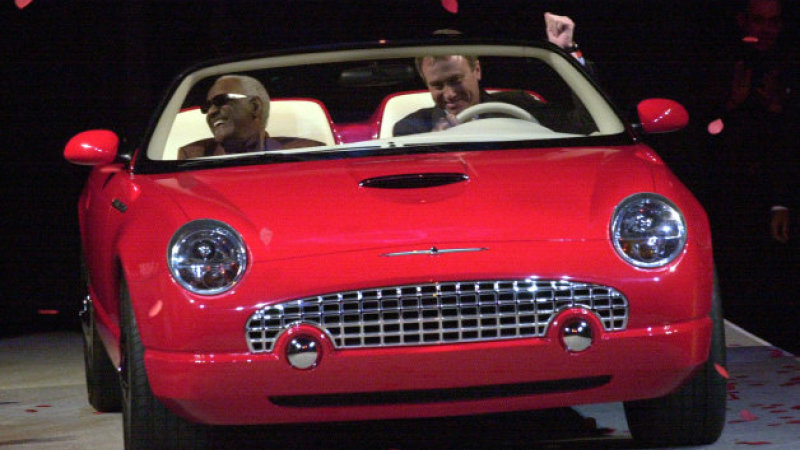 I start by admitting an unjustifiable antipathy towards J Mays, which I must put to rest, now. It is based purely on the fact that he once called a 1 Series BMW a ‘shitbox’. Although I have admired several Bangle era BMWs from first viewing, the 1 Series was never one of them, but there is something unseemly about one designer slagging off another designer’s work in public.

In his defence I seem to remember that it was uttered in an interview with Stephen Bayley, so maybe they had just enjoyed a meal and indigestion and alcohol had taken effect. So I should really reset my dial of opinion of him to ambivalence, a position justified by his earlier work at Volkswagen/Audi. J Mays was responsible for the subtly good-looking, conservative but modern, B3 Audi 80. On the other hand, he was also responsible for the New Beetle which seemed amusing enough as a concept but, unfortunately, has not aged well.

And that’s the problem with Retrofuturism. With one foot in the past and another in the future, it can make sense at a very particular time but, as things move on, the balance is lost.

So maybe J Mays should have stuck with modern, which he showed he could do so well but, when he arrived at Ford, he really started digging into the back catalogue, specifically Ford’s heritage crown jewels, the Thunderbird, the Mustang and the GT.

The original 1955 Thunderbird was a small car, by US standards, a 2 seater. It was Ford’s retort to the Corvette which, in turn, was GM’s interpretation of ‘European’ and, as usual, in both cases Detroit had decided that half decent handling was not the reason that home buyers purchased imported sports cars. But the ‘Bird sold very well and, whereas criticisms from enthusiasts could reasonably be expected to inspire Ford to tweak the handling to match the looks, Ford had a better idea.

From 1958, the next generation had looks to suit the handling, bloating into a different vehicle, a full four/five seater depending on how intimate you wanted to be. Despite its name and its big engines, at heart the Thunderbird was always a wafter, a car to enjoy and drive at 70%. It was a budget Continental or Eldorado.

These were its Golden Years. In 1967 a new model year marked the end of a convertible option and the introduction of a clap-hands 4 door variant with dummy hood irons which, although I find myself strangely attracted to, was not what the Thunderbird was about. The ‘Bird had started a slow decline.

That classic car you have always wanted might always evade your grip as new markets open and prices escalate. However this isn’t always the case. Today, early Thunderbirds seem to have peaked. The people who remembered them when they were new, and who promised themselves one when they had the time and money to do so, have either got bored with the reality or died, leaving the market glutted. Fantasies move on.

However the first generation T-Bird was the one chosen for J Mays’ team to retrofuturize, using the same platform that Jaguar had already made the same error with on the S Type. Like the original it was available as a 2 seater convertible only, though the sharpness of the original was ignored for a more rounded body, but one that incorporated features such as the grille lattice with inset over-riders, bonnet scoop, round taillights and pastel colour schemes.

Was J Mays’ interpretation what the public expected for Ford’s T-Bird reboot? Personally, I quite like it, although Toyota maybe got there sooner with the Lexus SC430, and I’m not sure it looks worth the money – look at those blanks in the top of the grille. It probably reminds me almost as much of a Nissan Figaro or the Audi TT that J Mays started working on before he left VAG, as an all-American T-Bird.

Also, was it some bogus feeling of synchronicity that resulted in Ford agreeing to supply Lady Penelope’s six-wheeled pink FAB1 for the much-slated Thunderbirds film? Whatever the answer, I can’t imagine that using the T-Bird as a base, and incorporating some of its styling cues, will have helped its case.

But what did the 2002 ‘Bird say about its driver? Just as it had been in the earlier days, this was an easy going, Dean Martin sort of car, but one introduced into a Hip-Hop marketplace. By then, the US market had finally been convinced that there was something wrong with that sort of car. Not that the underlying DEW98 platform was bad, but the car just looked soft. Also, for a Ford it was relatively expensive and nostalgia only goes so far. Despite initial enthusiasm and bursting order books, sales tailed off rapidly , and, after its 3 year run, it was not replaced. 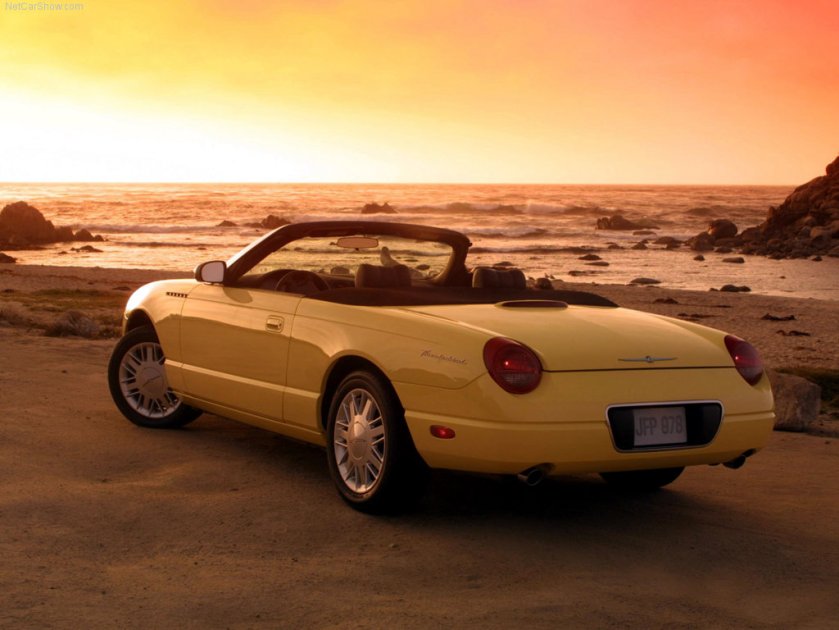 Although offering slightly cramped seating for four, the 1964 Mustang was probably the truer successor to the Thunderbird of 9 years previous. Received rapturously from the start, it built its reputation quickly and, by 1971 it had grown gross and showy then, in self-disgust, it had a radical diet and became small and, it must be said, wholly unattractive. After that it pootled along for years, never disappearing entirely, but never setting anyone on fire. Its Golden Years had been much shorter than the Thunderbird’s

By the early part of the Century something needed to be done with the Mustang but, by then, J May’s team had possibly realised that you can only retrofuturize too far. So they went for a mid course that was almost VW Golf in concept, imagining what would happen if the original design had been tinkered with and evolved through all those lost generations.

This seemed to do the trick, even if the use of a live axle when the platform could have accommodated IRS was a bit of retro too far. With some mid-term alterations, the car lasted 10 years and has been replaced by one that still shows the traces of the original in its evolution, though with IRS. History has been re-written. The dire and stunted Mustang 2 and its Fox platform successors are forgotten. Even the unbelievable sight of the behemoth ‘71 Mach 1 wobbling along on its side in Diamonds Are Forever like a circus elephant on a bicycle can be put to rest. The pony car lives on.

Like many racing cars that bear a major manufacturer’s name, the GT40 of the nineteen-sixties that brought them Le Mans glory was not really a true Ford product. Though having some engineering input from Dearborn, it was really developed by various specialists in the UK and the US. As with many racing cars, the shape was not drawn in one hit, it evolved, though the distinctive style might best be attributed to Eric Broadley and, particularly, Len Bailey.

The original GT40 was basically a pure racer. Some hardcore Mark 1s were offered for road use, and a few slightly more civilised and softened Mark III versions were marketed specifically as such. The roadgoing Mark I seemed a very exciting prospect at the time and, until the advent of the Lamborghini Miura (itself influenced by the Ford), it was my teenage fantasy vehicle. Despite Mr-Bloody-Multi-Coloured-Swap-Shop-Blobby crimes, part of me cannot fully condemn the TV presenter Noel Edmonds since he owned one in his (and its) prime.

In the intervening years, the design was kept alive by various replicas from small manufacturers and Ford’s interest was so slight that they even lost the rights to use the ‘GT40′ name at all. In the mid 90s, Ford produced a mid-engined, New Edge styled V12 concept, but its only link to the Le Mans winner was the ‘GT90′ name.

In the early noughties this disinterest changed and, for what was a vanity project, albeit a reasonably excusable one, Ford chose the retro route, both mechanically and stylistically. By most accounts, the former course was a good move – conceptually it mimicked the original, but made intelligent use of new engineering and technology to ensure that ownership of a 21st Century Ford GT is a pleasure in the manner of a Honda NSX, with none of the blighted compromises offered by some other exotics with more upmarket names.

But for the styling, J Mays was magnificently radical. There would be no cutting-edge updating of the GT90 concept. Neither would certain GT40 cues be grafted onto an Italian generic style. Instead the original GT40 would be put into a photocopier with the enlargement set to around 110%. True, a GT40 anorak could compile a huge list of differences but, to a casual glance, even a reasonably informed one, J Mays was just re-creating the car for a bigger generation. And why not?