Is the Dynamic the run-out model that the Jaguar XK deserves?

I had the pleasure of a quick drive in my friend’s new XKR Dynamic. The Dynamic is one of two “run-out” special editions of the XK, and in this instance came in black, with black alloys, a black roof and boot-lid spoiler (you guessed it, also in black. I can see the attraction for many of the look of the car in this format, but it is not subtle and, to my eyes, ages what is a fundamentally alluring car – I suspect that that spoiler is the main spoiler here.

Inside, the XKR is nicely trimmed, with quality leather (black) and a nice wheel.  The dash is very familiar and not en vogue anymore, but is still attractive and sporting in nature. The infotainment and integration of phone, satnav, sound system, etc, is quite out of date, and my friend was bemoaning this as a step backwards from what he had been used to in the current generation XJ that he had traded in exchange. Still, all this is missing the point, I think, as this is a car that is not meant to be enjoyed for its CD player. Oh no. 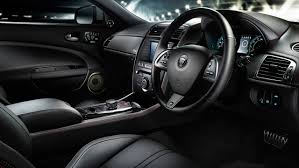 To drive, this car is a snarling, powerful, wild animal. The engine’s power and torque are such (quoted as 510 BHP and 460 lb/ft) that even the merest dab of the throttle pedal shoots the car forward with shocking alacrity. Be a bit enthusiastic entering a damp-surfaced roundabout and the rear end snaps away from you and you’ve got be quick with the wheel to catch and correct it.

The engine is smooth but emits a wall of sound as it seers up the rev-range, quickly reaching a point when the blare from the exhausts is all consuming – like the arrival of the apocalypse, one can here this car coming from miles away. On the over-run, it pops and bangs (loudly), and all the time I felt I was hanging on to it for dear life, like taking a tiger (perhaps that should be a jaguar) for a walk on a short leash.

Safe to say, I am not used to driving such a machine. The speed this car gathered and suddenly presented me with meant that my brain suddenly had to become super-alert, and the adrenaline flushed through my body at pace. This is part car – part extreme roller-coaster ride. After a few minutes, I started to adjust and try to drive with a little more delicacy, but it was really rather difficult.

The tone of the engine, the sensitivity of the throttle, and directness of the steering all brought out the bit of hooligan in me – it’s hard to resist, this XKR. And, I can’t remember much else about the car or the drive. I think the ride was hard, but well damped, and the handling fine, but there was a sense of the chassis grappling to keep up with the monster out front. I had forgotten (until starting to write this piece) that it was a soft top, because it just did not have chance to register in my mind. All in all, a laugh-and-whoop-out-loud experience, a rush, a chain-saw buzz.

A nagging thought is as to whether this is what a Jaguar should be. Is it a bit too uncouth? This is what I imagine one of those mad, late-model TVRs would have felt like, which in turn brings to mind some rather unflattering comments from LJKS about those cars. It also resonates with a statement made by a senior engineer in the doomed MGR enterprise to the effect that “we can take MG and make it raw”, which I took as a rather over-wrought and, therefore, desperate intent to overcome the firm’s twee and non-dynamic image.

I fear a little that JLR feels it has to do the same with Jaguar, and is still trying too hard. I saw an XFR-S – I think that’s what they call it, it’s the model above the R – in a car park the other day and thought it over-accessorised in racing blue, big tail spoiler, flared sill-covers and aggressive front bumper/ valance; like an 80’s Vauxhall Cavalier that had been lavished with the latest and best addenda from a Max Power catalogue of that decade. I don’t condemn such things per se, but on a Jaguar? Really? Where’s the grace, the poise, the touch of reserve?

I liked the XKR Dynamic a lot, it was brilliant fun, but I’m not sure it’s the run-out model that the XK, or Jaguar itself, deserves.