Phase four – 1986-1994: An Ecstatic Début. Jaguar’s management bask in the approbation of a valedictory UK press as XJ40 breaks cover at last.

It even made the TV news. On the 8th October 1986, Jaguar finally revealed their long-anticipated XJ6 and the UK media went nuts. There wasn’t this much excitement since the Austin Metro launch, six years previously. Car, devoted 28 editorial pages to the new Jag, describing it as a triumph of engineering against overwhelming odds, which to some extent it was.

Veteran pundit LJK Setright summed up the magazine’s position in characteristic fashion,  “…to recognise the Jaguar as a fact of engineering could not mean as much as to realise it as a feat of poetry: to drive the car will eventually be enough”. LJKS was enraptured by the XJ6’s engineering integrity and would remain a vocal proponent of XJ40 and of Jaguar’s chief engineer in the years to follow. Fellow Car journalist, Gavin Green added, “Jaguar has just announced what we and plenty of others say is the world’s finest saloon car.”

Car wasn’t alone in its praise. Performance Car‘s Jeff Daniels returned from the Dunkeld press launch with few doubts, telling readers, “Does it succeed? Of course it does. If one could sum it up in a rather oblique way, don’t imagine Sir John Egan is joking when he talks of 100,000 cars a year from Browns Lane in the foreseeable future. There is that kind of market for a car that sets these standards.”

In fact, the entire UK press corps were as one about what was by all accounts a tremendously accomplished motor car. The XJ40’s road behaviour was singled out for most plaudits – Jaguar once again setting a new benchmark in suspension compliance and ride quality, just as its predecessor had 18 years previously.

Motor described it as “one of the most remarkable cars we’ve tested for a long time”, lauding the car’s high-speed ride comfort as ‘astounding’ and the 2.9 model as being ‘stupendously good value for money’. They hailed its ride, handling and refinement as having ‘no equal’. Weekly rivals, Autocar, were equally smitten, Mark Gillies describing the Jaguar as, “a superb car… a lesson to those who think that excellence is dead in the British car industry.”

It was a personal triumph for Jim Randle, a man who personified the term modest, and having seen XJ40 through all manner of turmoil, his stock was never higher. Another highlight was Randle’s presentation to the prestigious Institute of Mechanical Engineers in London – the task of manoeuvring an XJ40 into the historic building proving almost as challenging as developing the car itself.

John Egan too was refreshingly honest about the risks of replacing an icon, admitting to Car’s Steve Cropley, “I have been worried whether XJ40 is sufficiently different from Series III. I’ve also worried whether it’s too different”. Sleepless nights no doubt, because XJ40 would now make up over 60% of Jaguar’s volume. The car simply had to be right. 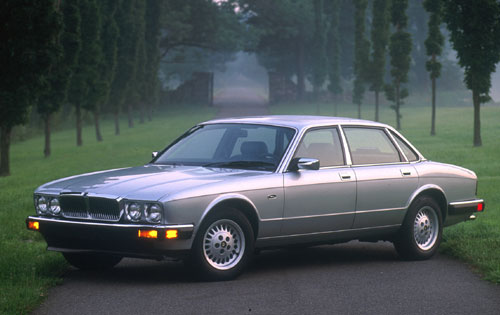 Derek Waeland pointed out the gulf Jaguar was trying to bridge; one example being when XJ40 was conceived, door gaps of six mm were not uncommon, however by 1986, four mm had become the norm. With first-hand knowledge of the location of the bodies buried in order to make the launch date, he went on to admit, “There are lots of compromises in the car of course, but we think it works”.

Quickly, demand for the new model outstripped supply. Jaguar astutely priced the entry level 2.9 model to undercut executive favourites like the Granada Scorpio and Rover Sterling, the very thing former BL Chairman Ray Horrocks had been desperate to avoid. Jaguar’s advertising stating that for the price of an ‘executive car’, buyers could have a genuine luxury vehicle. For many, there could only be one choice and by December, XJ40’s were selling at significant premiums as customers clamoured to be the first with Jaguar’s new star. It was all just a little history repeating.