This is a good one: cherishably bad photos from the school of Douglas Land-Windermere. The car itself is going for 40,000 kr or about €5400 and seems to be in good condition. The question is…

why the oddly cropped photos? You don’t see very many of these ’70s Audis and the price being asked is on the high side for what is a quite uninteresting car. You’d think they would do more to sell its limited charms.

The Audi 80 existed as a competitor for the Opel Ascona and Ford Taunus. While it seems visually innocuous and rather unexciting technically, it managed to gain the European Car of the Year award in 1973. That was the same year Alfa Romeo offered the technically advanced Alfetta which had legendary handling to

go with its legendary incapacity to resist rust. While Alfa offered rear drive and all the main masses located inside the axles, Audi were pioneering front drive and rather inert handling. The mechanical details: a MacPherson strut front suspension, and a C-section beam rear axle located by trailing arms and a Panhard rod using coil springs and telescopic dampers. That is a recipe for stodgy road manners. The engine hung a bit forward of the front axle, to the detriment of steering. 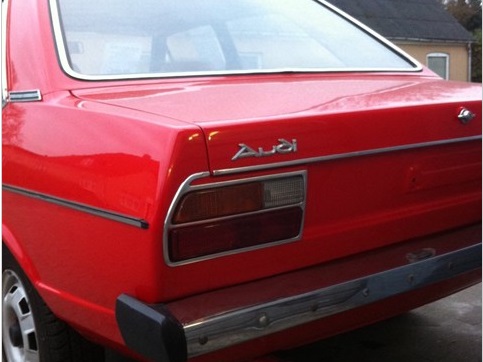 Which version is this? The seller does not list one technical detail but did note the colour which is red. That’s very useful since about the only thing you can glean from the photos is indeed that red is the colour. The odometer stands at 124,000 km. And that’s it. We are being asked to go and take a look at a 39 year old unlovable rarity without even knowing if it’s the 1.3 or 1.5 litre engine and without any clue as the state of the interior or which gearbox is offered (probably a four speeder but who can say).

Audi have a peculiar quality of being evidently quite well made vehicles but about as desirable as Renaults or venereal diseases from the same era. Nobody seems to love these cars, not as much as Tauni and Asconas from ’70s which are still chugging around in decent numbers and which have a committed base of fans.  I would prefer to take this 1976 Opel Ascona with 128,000 km on the clock for a mere 29,500 kr. And the ad is chock full of details, right down to a photo of the VIN plate, boot and engine bay. It’s also a two door. That’s a charming car and properly photographed too. I hope it goes to a good home.

One thought on “Something Rotten In Denmark: 1976 Audi 80 Two Door”