Driven to Write asks how important is Bloodline?

In the spirit of the biomorphism that we just can’t help applying to so many inanimate objects, with cars we try to emulate natural processes by using the term DNA to describe the hard-to-otherwise-define traits of a particular brand, and we speak of Evolution, a natural process about which we remain relatively ignorant, when one model supplants another..

Real evolution is a painstakingly long-winded process. My own bad back forever reminds me that the human spinal structure is still catching up with our pretentious insistence on scurrying about on two legs. Of course, we are at a point in our understanding of genetics when that situation might begin to change and we can start to tailor future generations to our preferred specification. This makes me relieved it didn’t happen 100 years ago, or I’d have an extra leg now made near-redundant by the ubiquity of automatic transmissions.

In the natural world, we probably put too much store on bloodline. It’s often a cause of conflict and, taken to extremes, it feeds racism and the concept of eugenics, a theory of controlled breeding notoriously espoused by the Nazis, but actually invented in Britain. On a more harmless level, it results in the current obsession with genealogy, a form of research that was once the province of people who could be bothered to travel around looking at parish registers, but now available to the armchair explorer due to the presence of so much information on the internet.

The default for many seems to follow the family tree up the male line which, as anyone with the rudiments of biology knows, is foolish. The female line is a far safer, though still not foolproof, route to ensure continuity. But whichever route you take, and even if you believe that your family have been honest and faithful to each other over the centuries, does it really matter if you are descended from Empress Matilda, a conceit far more easily found in documentation than if you were descended from her latrine cleaner?

Likewise, does it really matter that a brand of cars has a familial identity that you can trace back decades? In the sixties, I remember seeing a group of sketches by a German designer, proposing a gradual series of changes to the Beetle as it morphed into his proposed 1970s incarnation, a car that was still, recognisably, the poorly packaged, slow, quirky handling car beloved of millions, but a bit more modern.

I’d make two points about this. The first is that such a scheme would have been the end of VW – what it needed was what it finally faced up to doing, a complete break with a completely different vehicle, the Golf. The second point is that, taking a related car whose practical considerations were less essential, that very scheme worked marvelously for Porsche. It also, of course, currently works for other brands within VW group, but should they begin to ask whether they should look to their past more for a warning, rather than inspiration for New Beetle 3. 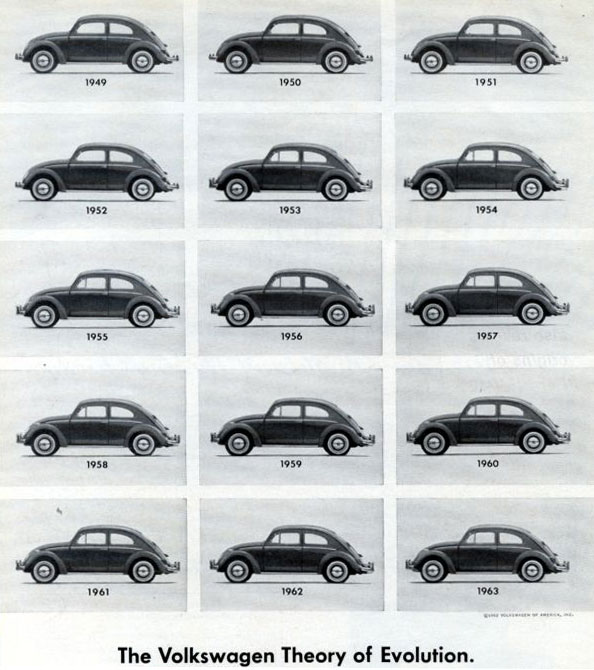 Nature’s learning process is invisible to us. The motor industry’s learning process is often invisible too. It does something that works, then dumps it. It introduces something that doesn’t work that well, and others copy it. Much ‘evolution’ in the motor industry is led by people who want to sell new cars to people who have perfectly adequate old ones. In our market society this is seen as healthy; it keeps people busy, both working to produce the items and working to afford to buy them.

In more idealistic times when, like many, I was too ignorant or too willfully blind to see the terminally clunky awfulness of its structure, I looked at Eastern Bloc communism and wondered why, Tatra excluded, they didn’t produce a fine car or two. My feeling was that, being in a situation where they had no competition, they could concentrate on making a car that was properly tailored to its purpose, using the best technical solutions to give something that would serve its users well and last for years.

This is hardly an unrealistic thought. Even people who aren’t really into cars waste a stupid amount of time deciding whether an Audi is a more sensible purchase than a Ford or whether a Kia is a better choice than either. The answer of course is any one of them. They are all fine. It doesn’t really matter.

Nearly 40 years ago I was driving Ford Cortina Mark IVs around for a living. They were cheap and did their job OK. Had Ford just tinkered with this design sensibly over the years and had all the other manufacturers just faded away, would I look at my 2015 Cortina, still recognisably the shape of the cars I’d driven in the 70s, but with excellent rustproofing, better tyres, a fully sorted and bulletproof drivetrain, improved crash resistance and a couple of useful improvements like ABS, all available for £8,000 and expected to last me at least 10 years, and feel my life was diminished?

Sure there were better options around in 1976 to base this notional universal vehicle on, but that isn’t the point. That you don’t miss what you don’t know is a truism but, although my own attitude is that in many aspects of life we should aspire to the very best we can achieve, the automotive business has blundered along in its inbred and overpriced genetic backwater for too long. I’m greatly in favour of worthwhile progress, but there really isn’t enough interest and diversity out there to justify the huge amount of energy that has been put into the industry since 1976.

Our ability to design and manufacture means that we can tailor objects to fit us rather than waiting several thousand years for us to fit them. However our vanity often makes us rather poor at doing this; we’d often prefer an artefact that looks good, to one that fits us. Additionally, our natural conservatism, our need to link ourselves to the past, informs so much automotive design where evolution is a reversible process that sees yesterday’s cutting edge becoming tomorrow’s retro.

So, with each new model we have the question, evolution or revolution? With the former, this gives us the chance to refine and to iron out errors – or does it give us the chance to repeat mistakes and magnify them?  The latter gives us a clean sheet, an opportunity to rethink entirely – or does it just give us the chance to produce a raft of new mistakes?  I’d quite like to see a more open-minded and flexible industry, controlled more often by crude, common-sense maxims like “if it ain’t broke don’t fix it” and, at the other end, “don’t follow the herd” to one that puffs itself up with quasi-scientific metaphors such as DNA and evolution. In the matter of cars, does that make me a Creationist?