Was GM’s EV ever a contender? And is it a Parallel Hybrid? This is a revised version of a post published last October following the Opel Ampera’s withdrawal from sale.

We laugh at giants at our peril. General Motors has made many mistakes in its existence, but it has scored lots of hits, and it’s still around. So, when they started taking EVs seriously, for the second time around after the controversial EV1 of the mid 90s, we needed to take GM seriously.

However giants take the small people for granted at their peril. GM’s very size means that it has little affection or goodwill going for it, so it will often be harshly judged. When the Chevrolet Volt, whose technology underlies the Ampera, first appeared critics were quick to accuse it of not being a pure EV, claiming that it was no more that a smoke-and-mirrors version of a Prius.

Parallel hybrids don’t excite me – there is something conceptually clumsy about them, although I admit that a ride as a passenger in a Prius is a pleasantly uninvolving business. My preference, based on what seems an elegant future solution, rather than the state of current technology, would be for a car that has a reasonable range in pure electric form around towns with a mini-turbine powered generator for potentially infinite range extension. However at present we seem to be reliant on the old reciprocating internal combustion engine for on-board power.

I’ve seen people on websites berating those who want to cure their ‘range anxiety’ with supplementary power units as wimps – man up, go 100% Electric. Nice idea but, unless I get a very long extension cable that isn’t going to happen. To retort to the 100% electric macho brigade, if your life is so perfectly ordered that, when you wake up each morning, your day stretches out before you perfectly planned, with each kilometre to be travelled neatly accounted for, well done. Mine doesn’t, and I know many others who don’t, so I can’t rely on keeping within a finite range.

Like many, the BMW i3 was the first EV that I really felt attracted to. The production version disappointed slightly, but it still remains an attractive package on paper except for the suspicion that rear seat passengers might hate me and for the nature of the range extender. The rough little scooter engine is strictly a limp-home device. Even disregarding the fuel tank size, it can’t generate enough power to guarantee to keep you out of the slow lane on a motorway.

Obviously BMW are aware of this and, although they can be congratulated on getting the rest of the car into place so quickly, the range extender is a rather tacky and cynical afterthought – a 10 year old range-extender i3 (or maybe even a 3 year old one) will surely be viewed as a snapshot of work-in-progress. So if you’re in Central London and you get a call to get down to Bristol in a hurry, just leave the i3 at the side of the road and get a train – which, of course, you can rightly point out fits in with the ethos for getting an EV in the first place but would not suit me, especially if I had a boot full of things to transport.

Strangely, the one EV that currently addresses these issues most convincingly was withdrawn last year, giving motoring hacks the chance to write “Vauxhall Pulls The Plug …..”. The Ampera, a development of the Volt that continues in the USA, has a complex system, which confuses and offends those in search of a pure EV, but which affords you the potential of limitless range, allowing for fuel stops, without real-world compromise. I can’t help but feel that antagonism towards General Motors, which, bearing in mind its history is not entirely undeserved, coloured acceptance of this car. And brand snobbery, of course.

In the UK the Ampera wasn’t cheap but, if you want to be an early adopter of anything, you end up paying a premium. Actually, from £28,700 new (though the price at launch was higher) it seemed a reasonable price to me for a well thought out solution, especially compared with the smaller, stylish but compromised i3 range extender (£29,000), the all electric Tesla (from £49,000) and the Prius Plug-In (£28,000). Had it the spinning propeller badge on the front, I think take-up would have been far greater.

Sitting in the car, it’s comfortable and smartly designed. The positioning of the battery in the area that would house a transmission tunnel makes it strictly a four seater with not as much room in the rear as you might imagine, but it has reasonable luggage space and folding seats. The view out is, of course, woeful, but I could say that of so many shallow-windowed, thick-pillared contemporaries. From the outside it’s distinctive and the front view works well, but the shiny black strip beneath the side windows doesn’t really hide a certain slab-sidedness and, certainly, it doesn’t make the windows any bigger.

Its powertrain promises a maximum 50 mile range on electric power but, as with all EVs, this probably assumes that you are driving conservatively, under ideal conditions, in daylight, with no air conditioning and without having the Bose sound system on maximum volume, and the figure achieved is likely to be 35 miles or less, but still more than many daily commutes. Once this is used up, and assuming you can’t stop and recharge at a socket, the petrol motor, a more substantial device than that of the i3, comes into action and at this point things become more complex.

There are two electric motors, one for lower speeds, one that cuts in at higher speeds. The petrol engine first starts driving this second motor, turning it into a generator, so at this point the car is a series hybrid. Finally, as speeds increase further, some of the engine’s power is sent direct to the wheels by means of a planetary gearbox so that it becomes, in part, a parallel hybrid or maybe more exactly a hybrid hybrid. This might seem complex, but it probably deals with the issues that restrict the everyday usability of an EV in all conditions better than anything else currently around.  However, this latter mode is the one the infuriated critics, who pointed out that the petrol engine was driving the wheels directly, and that GM was ‘cheating’. The hard working team at GM might be excused for being well pissed-off by such nit-picking. 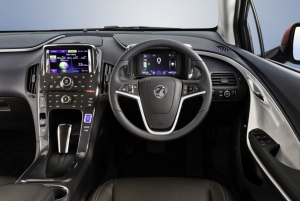 Last year, you could pick up a 2 year old Ampera for around £18,500 with the remains of an 8 year battery warranty. Typically it might have covered 20,000 or more miles and you can look at that two ways. First, that you’d have expected an EV to have covered less miles in such a short life. Second that it’s a testament to its usability. I tend towards the latter.

Looking at figures, in that 20,000 miles the car has possibly saved its owner less than £1,500 in fuel bills (plus road tax and, possibly, congestion charges) over a cheaper equivalent new car with a modern, miserly diesel, but the progress of the Ampera will have been far less rackety. If running costs are your bottom line, and you factor in depreciation, an EV still remains an outsider choice. But it’s one I think I’d be happy to live with even if, when I do the crude mathematics, I might have to drive 60,000 miles before any savings had paid for the difference between it and the aged petrol guzzling Audi I drove around London until recently.

I have a brochure for the Ampera. Obviously written when GM were feeling optimistic for its chances in Europe (“Resistance Is Futile!”), it makes rather sad reading now. EVs certainly aren’t going to vanish, and a GM EV will surely return to the UK but, looking at the success of Tesla, it’s a mistake to believe that it is simply doing what GM can’t. A giant like GM just sees Tesla as doing the groundwork that it doesn’t feel inclined to do itself. When battery technology has reached a suitable level, and when enough charging stations are in place, be sure that GM won’t hold back.

Their future offerings, like most other GM products, probably won’t stand out and will be just a safe version of whatever everyone else is offering. But, even though it was confined by then current restraints, and its technology won’t be that relevant in a decade’s time, I think that history will be kinder to the Volt/Ampera, viewing it as an intelligent solution for its time.