The Citroen C4 has been on sale for half a decade. The time is right to put one to the test.

During the course of this weekend test I really did struggle to think of something to say that did not over-emphasise my feelings about the car. The thing is that the C4 is a collection of details that don’t hang together. The character of the car is not in the measurable dimensions. It doesn’t actually have any character at all.

Looking at the outside of the vehicle there can be found a collection of modish features that are there to conceal quite flat sides and a less than thrilling profile. You would imagine this is to

disguise a spacious, packaging-biased car with unprepossessing proportions. Yet inside one doesn’t find acreas of space. It’s not cramped but it is no limousine (a Peugeot 306 I saw during the test seemed cavernous inside by comparison).

When you get inside the car you find an interior that borrows the semantics of a sporting vehicle. The dashboard is home to a cowled binnacle with expressive elements and deep circular tunnels for the displays. The air-vents are far from rectangular and finished with

aluminium, so very exciting. The steering wheel has a flat lower edge, also trimmed with metal. The not-very comfortable seats are well-bolstered with raised edges to keep one in position. All this implies an athleticism the car is entirely lacking when driven. The car has no sporting intentions at all. And it’s not even biased toward comfort either. The suspension fails to smother bumps and cobbles defeat it. Car Buyer disagree with me on the ride comfort and seat comfort

Turning back to the shapes, the car has been formed by people who know how to make each element as professional as they can be. What puzzles is that they don’t know what they are for, what they are supposed to signal. That flat-bottomed steering wheel is all the more absurd when one starts up the car and drives off.

Let’s consider the interfaces, shall we. The mechanical ones are neutral in their effect, neither good nor really bad though maybe we could call the brakes snatchy and the steering heavy and numb (Autocar thinks it’s too light, I note with amazement). The ancillaries such as the HVAC try to be “premium” and don’t succeed. The little rotary controllers for air flow aren’t smooth. Better than the Picasso from last week, yes, and that’s as much praise as I can muster.

Looking more closely one finds a central circular control to select the air outlet: feet, face and window. The buttons are rather small and fiddly even if there is a lot of space around them for making a bigger control. The front passengers are able to select their own air temperature, and two equally fiddly buttons are there for this purpose.

You’ll notice I am not addressing the driving at this point because there is not a lot more to say. Did I mention the car wasn’t too keen on rough roads? I took the C4 down my favourite gravelly section and it hated it. Or rather I hated it. I was afraid I’d break the car in some way such was the crashing and banging from under the vehicle.

So it’s back to the car interior. The centre armrest for the driver is sloped and fixed in position. The further you move the seat forward the lower the resting surface becomes relative to your elbow. Then there is nothing to rest your elbow on because you left the thing behind you as the seat travelled towards the steering wheel.

I did like the colour of the interior lights and the rear roof-mounted light throws out a good beam. If you want to find a seat-belt or fold down the seats this is handy. That only reminds me that the seats backs don’t fold flat. Seats down, the seat backs remain a bulky intrusion into the load bay and there is nowhere to put the parcel shelf. Is this technology as it should be, 100% useful? Seat “down”, the C4 holds 1180 litres of stuff. Seats up the boot holds 408 litres. It looks bigger.

Unlike the Picasso I tried last week, I got the cruise control to work. The buttons are all the same as on the Picasso. How does it work? If you have cruise on pause you tap the plus or minus button and it resumes, but a few mpg higher than the speed it was set at. So you tap the minus button to bring it back to wherever it was at before you resumed. Often the car cruises at a mile or two per hour over the stated target.

The fuel economy test produced a good result (I drove entirely at or below the legal limit the entire time). The C4 returned 62 mpg which is quite something. Did I mention it was a diesel? The engine was the 1.6 Blue Hdi. Using our standard Channel Tunnel to Cap Ferrat route, the C4 can get 900 miles from a tank and that means you might not have to stop on the way south.

I wouldn’t want to drive all the way there in this car though. The driver’s seat lacks lumbar support, as I said, but the rear is cramped and missing a centre armrest. It’s also dark and depressing. I suppose some of the precious passenger space was allocated to the luggage bay. And that brings me back to the neat features therein: elasticated straps to hold things in place, curry hooks and a good lamp. It seems the luggage gets a better deal than the rear passengers.

The glove box is huge, by the way. I think it could hold three large chickens.

At 1280 kg, the C4 is no featherweight. What does the weight do all day? The doors shut with a clang and the suspension sends all the noise it can through the body work. If you look at the fit and finish of the interior trim you don’t see very much evidence of quality touches to inspire you. The sills, a-pillar and tailgate all feature cheap-to-design shingle joints. These are the type where one part sits over another so the two are not flush. The dashboard end-cap and the a-pillar aren’t that neatly done (there’s a photo below). When you reach for the tail gate there is a sharp edge to contend with. It’s not razor sharp but it is sharp enough to be uncomfortable. The boot itself shuts with the kind of low-rent feel of a dishwasher door, some kind of an interference fit of plastic bits rather than feeling like a metal lock mechanism.

What I want to get across here is that the C4 is a car where there was no unifying vision to tie the car together. I don’t see it as a comfortable vehicle, despite Citroen’s insistence. The ride is long from the best I have tried in recent years (perhaps only the Megane was worse). Engine noise, road noise and wind noise all obtrude. The interior form language promises a sportiness the car doesn’t provide either. Individually, quite competent people worked on this car. They needed someone to unify their efforts. They were absent.

The Focus/Golf/Astra class is choc full of very good cars and the C4 is not one of them. I have said in the past that Kia and Hyundai are offering (much) better cars for a similar price. The C4 is bested by both of the Koreans on all parameters barring interior roof lighting. I can’t think of one solid USP that can win the argument for this car. The fuel efficiency is more of a threat than a promise. Who would want to be in this car for a full tank of diesel?

The colours are boring too.

Finally, I can’t help thinking of Car Magazine’s verdict on the C4 when it first came out. They called at “left field” choice. Given the ordinariness and the blandness of the C4 I can’t understand how it can claim to be left field. Were it special this description might make sense. But it’s not. A replacement can’t come soon enough. This car is a polar cup. It drives and carries people and has no further identity. 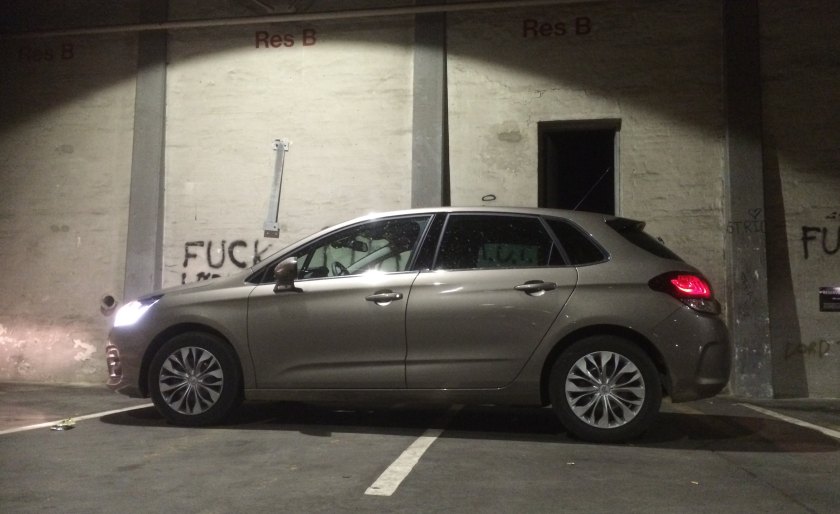