My recent attempt to visit Citromuseum in Castellane in the French Alps was foiled by its rather short opening hours. Arriving in the morning, I found that, except for July and August, it only opens in the afternoon and, unfortunately, by that particular afternoon I needed to be somewhere else.

Personally, I’m not sure how much I missed. With no disrespect to the museum itself, which I believe contains a comprehensive collection of low-mileage Citroens in original condition and is run by an energetic, enthusiastic and good-natured curator, I tend to agree with Richard Herriott, who wrote a piece on this site about car museums early last year.

For me, however good, unless you can touch, sit in and, ultimately, drive the cars, a museum gives you but a superficial overview. Of course that is an impractical desire but, though I can walk round a stately home and resist the temptation to jump on the beds and use the water closet, a visit to a car museum ends up being a tantalisingly frustrating experience for me.

So, in a way, my view over the fence at the large selection of rejects, donors or potential restoration projects that sit out the back, was just as satisfying. Imagining the well-kept examples that I assumed lived inside, behind the museum’s locked doors, I was reminded of Oscar Wilde’s ‘The Picture Of Dorian Gray’. Whilst the protagonist stays endlessly youthful, an oil-painting of him sits in the attic showing all the horrific effects of age and corruption.

The scrapyard is always a salutary reminder of the car’s mortality, as well as an opportunity to take a few arty pictures for your Pinterest page or, even, that proposed coffee table book. Unfortunately the chance to just wander into a big disorganised scrappy and climb around among the wrecks with your toolbox has long disappeared, in the UK at least, as scrap became salvage and health and safety legislation kicked in.

This does give me the idea for a display of individual models, with the near-pristine example placed side-by-side with its decrepit, rusty, scrapyard twin. The images in ‘classic car’ magazines of barn find restorations, where the movie of decay is put into reverse and a rusty wreck becomes pristine again, hold endless fascination for me though, as most anyone who has been involved with a restoration will tell you, it is also a road to endless frustration with details that are never quite right. Even cars can’t deny nature. 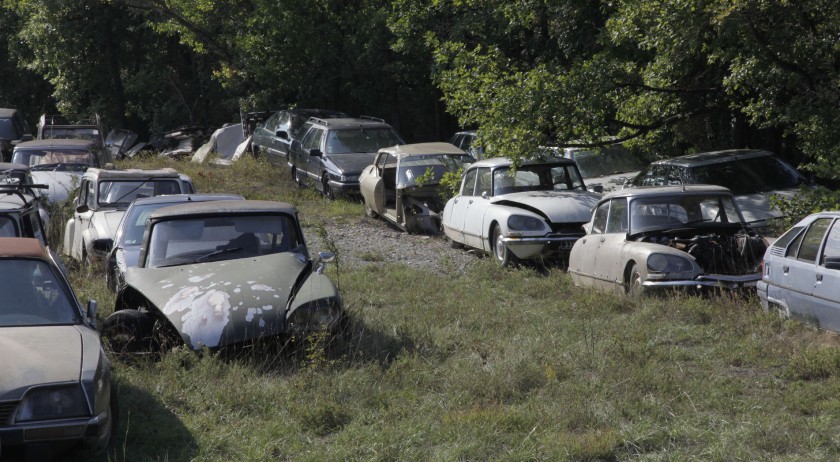 12 thoughts on “Behind Closed Doors”