Recently we had a look at the concept cars on display at the Volvo museum in Gothenburg, Sweden. Now it’s time to investigate some of the production vehicles.

The first few rooms of the museum represent the early years of Volvo which don’t interest me that much. Thus I didn’t take any photos at all. I wanted to get to the 70s cars from where my interest in Volvo takes off. That means my interest begins at the 262 stand. This one (above) glows resplendently in a very late 70s gold metallic paint. That it was designed and built by Bertone is well-known. This one does

without the vinyl roof and is the better for it. The interior had more elaborate seats than the standard car and some extra wood inlays and is pleasantly spacious, thanks to the 200-series’ square forms.

Here (below) is the 262 with its close relative, the 200-series, an archetypal saloon car which repels and appeals in equal measure. Personally, I think it´s excellent for its uncompromising approach to practicality. 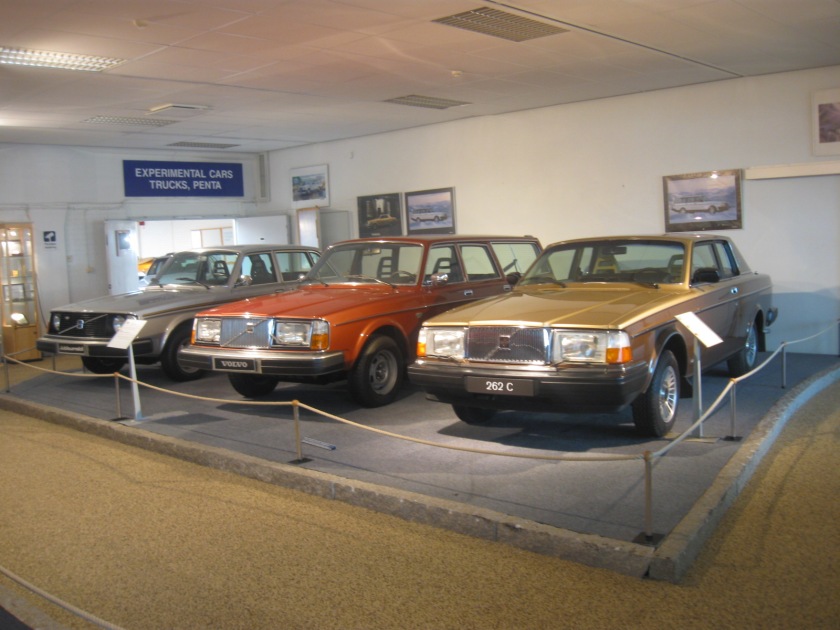 Volvo bought DAF in Holland just after they launched the 66 (1972). A year after the purchase the car became the Volvo 66. Michelotti did most of the design work and it must have been one of his last cars. Volvo adapted the car with a new interior and safety seats.

When I was in Sweden I saw pretty much every Volvo model on the roads, except the 66 and a car we will come to in a moment. This 66 is the first one I have seen since a trip to Geneva more than four or five years ago. Notice the rather questionable treatment of the shutline:

Launched a year later (1976), the 300-series originally had this very simple plastic grille and separate bumpers. This model too was not in evidence in Sweden. It had a leaf-spring rear suspension and famously vague steering. I drove a late-model of one of these, without power steering and it really was as bad as Clarkson made out in one of his polemical inserts on Top Gear.

I apologise for the blurriness of the photo.

You know what these cars look like so I have focused on a detail. Look at the level of craftsmanship on the doors. This is built to last. Those are very time-consuming metal folds and require a high-level of precision to make them fit neatly together.

As far as I can tell, this is the first car with this kind of fade-out ceramic edging  on the side-glass (above). It is there to conceal variation in the gap between interior trim and the glass and bodywork. I noticed this first when I was about ten years old and it struck me as quite a smart detail.

More usefully, this is the passenger compartment. The warm colours and soft velour contrast with the industrial design aesthetic of the hard trim.

Notice the generous width of the arm-rest. This is an exceptionally comfortable and spacious environment but it does not suggest excess. How very Swedish.

However, the exterior is clearly influenced by American tastes and the formal roofline is very much in keeping with what GM were doing at the end of the 70s.

The skewed plate (above) is not so fortuitous.

The 900-series  replaced the 700-series, when Volvo reworked but did not substantially change the architecture. Here is the 960 for comparison:

The headlamps are slimmer and slightly more inclined. It’s worth noting that in its top-spec trim level the estate was a car arguably without peer in the European market. At once highly equipped and far from cheap, it was still not as pointedly aristocratic as its only real enemy, the Mercedes E-class. This example is one of the last made.

I came to the Volvo museum in the hope of seeing a 780 ES. Maddeningly, their example was black, parked in a corner and obscured by an immovable information panel.

It is rather fabulous. The grille is slimmer than the saloon, as are the lamps which are monochrome.

Look at this window frame detail…

And here is one of the wheels:

The 850 (1991 to 1996, below) is not a car I really feel that much for. However, in this colour and equipped with the five-cylinder engine it becomes something more engaging. I really wish they had not abandoned bright-work when styling these cars. It was designed, like the 700 and 900, by Jan Wilsgaard.

The S80 is, in my view, one of the last beautiful European saloons. The other one is the successor. It is clearly a Volvo and clearly elegantly functional with a first-rate interior.

Why they didn’t make an estate version of this is beyond me. The S70 doesn’t fully fulfil the brief, sleeker but less spacious. The S80 carries on the 760’s values in a contemporary way. It could do with more brightwork, yes, but I still greatly admire this. It’s comfortable, capable and entirely unlike its rivals from Audi, Mercedes or BMW in demeanour.

So, that is our canter through Volvo’s museum in Gothenburg. Apart from the watery coffee, the place is well worth a visit.