Did it lose something in translation, or was it ever there at all? 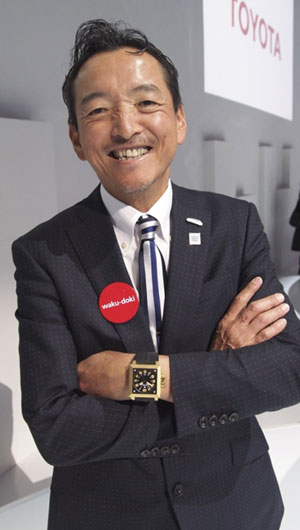 Waku-Doki! Like many vernacular expressions, translation into another language is unlikely to give the same emphasis. Toyota translates it as the lame “heart-pumping excitement”, but the untranslated Japanese expression does have a certain satisfyingly onomatopoeic sound to anglophone ears

The first time I read the term, it was on a badge pinned to the jacket of Toyota design chief Tokuo Fukuichi. He’s the same age as me, so it’s always heartening to see an old fellow making an effort.

Fukuichi is described as ‘an outspoken champion of experimenting with more polarizing, eye-catching styling’, so his appointment as head of Toyota design in 2011, then adding the position of president of Lexus, seemed to suggest that conservative old Toyota might be taking a few chances.

I remembered liking the man in this image. The quiff is no problem, though my phobia for novelty timepieces causes a little bit of disquiet. However, he’s posing with a degree of humanity, with quite a genuine looking smile on his face, and of course he’s wearing his badge of intent. It’s a refreshing change from the typical designer pose, usually side-lit, curled lip and stroking a white cat.

So what exactly did Waku-Doki offer? It was aimed at ‘the young, and the young at heart’ and promised to complement the ‘excitement’ of individuals’ daily lives. Of course Waku-Doki has to co-exist rather tenuously with Toyota’s long-term promise of Peace Of Mind. This contradiction is well illustrated by Asian market TV ads showing that very tired advertising trope of men in suits doing funky dancing in unlikely locations.

Waku-Doki has never officially reached the European market, but one non-literal translation of the Waku-Doki ethos into English seems to have been Saatchi & Saatchi’s ‘Go Fun Yourself’ campaign for the Aygo, which promised fun with comedians, internet pranksters and the like. Although we live in ironic times, I’m not sure that slight word swap within what is usually an insult, actually endears itself and, by all accounts, the car itself remains a fun-lite zone. I think you funned up on that one Saatchi & Saatchi.

Then, moving further up the scale, Toyota vowed to apply Waku-Doki to the Camry. How does this fare? By all accounts, a bit more engaging than the previous model, but still relatively numb and uninvolving to drive. Which is just as it should be and, I am sure, just as Toyota intended, because the loyal Camry owner is certainly not in search of “heart-pumping excitement”.

Toyota didn’t get to be so big by chance. They know what they are doing and they know where their strengths lie. When EVO starts rhapsodising about the Auris’s crisp turn-in and taut, well-planted ride, then heads will roll at Toyota HQ. Except for the occasional GT86, Toyotas aren’t meant to give adrenaline rushes. And apart from the occasional WillVi, they aren’t meant to challenge your preconceptions about styling.

So am I disappointed? Yes, because I liked the idea that Fukuichi-san might stir things up a bit at Toyota though, when you consider that this ‘noncomformist’ has been with Toyota for over 40 years, that was a remarkably naïve thought.