In Part 1, I made it as far as the Lancia Flaminia and not much further. In this instalment I will kick and jostle myself so I can cover more ground in fewer words.

This is the 1965 Lancia Appia with its impressive door closures and very lovely form. And if we continue to the other side of the car we are greeted by this flowing highlight over the front wing. The 1996 VW Passat did something conceptually similar. The later Fulvia and Flavia saloons had every bit the same thoroughgoing solidity. 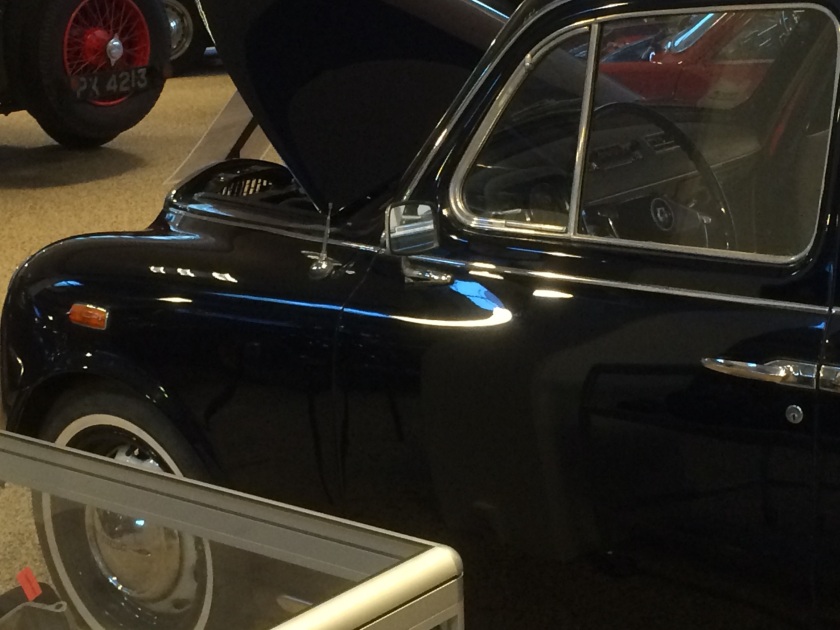 Placing it next to the hand-finished Sprints did it no justice though. It only served to show up what a lot of work went in to making the Sud cheap to build: exposed hinges on the bootlid, shallow pressings and quite a lot of panel gaps where the Sprints had almost none.

Imagine if Rolls Royce were to make Rover 600-sort of car. Good in itself, perhaps, but built to a price. We can discuss the rationale for making the Alfasud for a long while. Clearly Alfa Romeo needed to make money. For some of the engineers at Alfa Romeo the Sud must have been seen as a real betrayal of the kind of standards the Sprints demonstrate.

Downstairs I spent most of my time on the left side of the stair case and missed the extensive collection of electric cars. More than ever these are relevant but I was lured by the fleet of Jaguars, a Lagonda, a Riley and the holy grail of rare Swedish cars, the legendary 780.

The staff very kindly let me sit inside the 780. It would be churlish of me to say that I would love to have seen the car in a position more favourable for photography than this. However, I did get to check out the ashtray. As it was a prototype, the rather stiff and uneven action may not be representative of the production car. Other aspects seemed believable, particularly the lovely driving position and view out. The interior was finished in a tamer colourway than the car I saw in the Volvo Museum in Gothenburg.

This example is a 1984 prototype which was given to Ole Sommer as a museum piece and not as a car to be driven. This car has an in-line six cylinder diesel engine which was a VW unit. There can’t be too many of these around. At the time I struggled to think which engine it might have been as I was pretty sure Volvo didn’t have a L6 diesel to hand. The museum’s car has chassis number 144 and is the only zero-series 780 in existence, all other prototypes having been destroyed.

At the other end of the row is the 1956 Volvo P1900. Volvo wanted a convertible for the US market. Sixty-seven of these cars were made (Wikipedia says 68) and the difficulties in perfecting the tricky production process for the fibre-glass/polyester body work plus low demand resulted in the project being cancelled. The president of Volvo took an example to test over a weekend and returned sufficiently displeased with the frailty of the car to cancel production with immediate effect. This car is chassis no.3. The fact the car looked unacceptably odd also must have contributed to its short life.

The Volvos stare at a long line of Jaguar saloons which are always a pleasure to gaze upon. I would ordinarily have spent a long time looking at these. However, they faced stiff competition from the attractions of a 1962 Lagonda Rapide. The car looks simply huge but is in fact a modest 4966mm long. It’s 1765 wide and only 1422 mm high. You’d have to park it right next to a Mondeo to see it is actually a bit smaller. The dramatic coachwork and imposing proportions are so much the opposite of anything Rolls Royce or Bentley made at the time.

A straight 6 cylinder of 4 litres powered the car to 200 kmph. Independent suspension, too. David Brown hoped the car could revive the Lagonda name. Alas only 55 examples were made, starting in 1961. Touring provided the bodywork (they did some remarkable design work) which has a touch of Aston Martin at the back and perhaps too much Edsel around the grille. The lighting conditions confounded this photo. It doesn’t seem too Edsel in this shot so much as Jaguar Mk 10 which came out in 1961 (and was even longer and wider) but was much the same sort of vehicle and only a bit more successful. It’s necessary to show a side view but I had to source the picture (below) elsewhere.

A little further down the line is an intriguing car which also had a brief and not very successful career (1953 to 1957), the Riley Pathfinder. It’s viewed as the last proper Riley. Under the bonnet is what seems to me to be an odd kind of engine, a 2.4 litre straight four (I’d expect a six of some type). As it was getting on the for the end of my trip I ran out of alertness and Wikipedia had to be consulted to fill in this.

And as I read, I find the “last real Riley” shared a whole lot with the Wolseley 56/90/23-3400 (Wolseley’s names are simply impossible to remember. So, it’s not very much of a Riley at all. The Wolseley had a straight six of 2.6 litres capacity so you can see where the Riley stood in the pecking order. I haven’t seen this car in the metal before.

When seen from the side rear the car has a quiet dignity about it, something almost German. I enjoyed looking at the apparently simple bodywork; I suspect it’s not simple like Simon but rather carefully polished and scultped. The roof and C-pillar are very pleasingly handled. Notice the door-handles located on the brightwork at the base of the side-glass.

Lincoln have tried that on their new Continental, have they not? There’s nothing about it I feel is out of place though a round fuel filler cap would have sat more happily there than a square one. The gear lever sat between the driver and the door. The handbrake lever lived under the dashboard. Apart from that the interior is generic nice English fifties design.

Yet again I find a car that’s hard to place and I wonder where it would all have gone to if Riley had not lost its identity at the point when it was sucked into the black hole of the Nuffield corporation. This pathfinder looks to be the first of the Nuffielded cars, with an identity that was supposedly sporty and luxurious compared to Wolseley’s emphasis on luxury. This sounds like a familiar story and there’s loads more on the net if you want to unravel the mess of conflicting brands in the Nuffield Corporation.

That concludes this section of my visit. I will return with one more tranche in the near future.