FCA has been receiving positive responses in the press with the new Alfa Romeo Giulia. But, at present, although it will never be the big seller, a lot of the reviews seem to concentrate, rather disproportionately, on the £56,000 Quadrifoglio.

The other Saturday I had to do a drive I’ve now done several times, diagonally across England from South-West London to the Shropshire / Wales border. Once out of London, it involves a rather dull slog up the M40 and round the south of Birmingham, then an 85 km drive across nice country roads, bendy but with sufficient straight sections to allow overtaking, a couple of towns, a few villages, some moorland, all-in-all excellent driving country. The total distance was 284 km and I did it in 2 hours and 50 minutes, meaning that I averaged exactly 100 km/h (62.5 mph). During this trip I enjoyed my drive and I think about three cars overtook me on the motorway, none on the back roads.

The point of this is not to highlight my ability to pedantically chronicle journey times, but the fact that I was driving another FCA product, a Fiat Ducato panel van. Had I been driving something more powerful, there would have been a couple of instances where I could have overtaken whereas, in the van, I had to hold back. Had I been driving something more nimble, there were a few open bends, with good visibility that I would have taken quicker. And, of course, in a faster car I could have driven up the M40 at 200 kph, which would have made a difference, though I would have spent a lot of time braking for slower, more law-abiding vehicles, so I doubt the difference would actually have been that significant. So, had I made the journey in, say, my Audi S6, and assuming I’d acted sensibly, if not entirely legally, I might, at a push, have improved my journey time by …. maybe 5 minutes, but probably less. 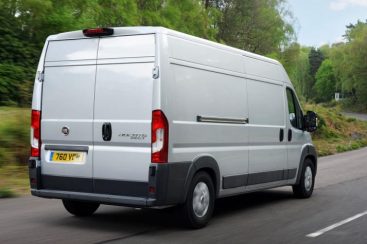 White Van Ringmeister – image : carthrottle.com
I can’t pretend that the lure of inappropriately fast cars doesn’t exist for me. I bought my Audi as a quick car, and I enjoyed it’s turbo 5 cylinder and slightly raw 4WD cornering. At one time I considered various turbocharged Subarus and, for a few months a couple of years ago, I entertained a desire for an AMG C63 Mercedes estate. But, in the end, this is just kit fetishism. My time is not so precious that I need cars like that in order to minimise my journeys – and, as I say, the saving would be very slight anyway. I don’t actually need them to enjoy the driving experience – dragging a panel van through a fastish corner is actually rather more satisfying to me than doing it at a similar speed in a mega-competent modern saloon.

My own observational experience is that 95% of self-proclaiming fast cars (by which I mean those upper spec ones from manufacturers that boast their prowess with an M, RS, AMG, R or other combinations of letter) are driven by people who aren’t actually that interested in, or even aren’t that good at, driving fast. I won’t say they’re wasted on them, because that is presumptuous – their reasons for ownership are their concern and they might derive some other satisfaction, but the truth is that I, or any other vaguely competent driver, could probably outdrive many of them in the most basic version of their particular model choice. But, more relevant, put us in the bells-and-whistles car and, although we might have the odd ‘whoo-hoo’ moment along the route, we’d probably be hard-pressed to do appreciably better than in the basic version – speed is usually limited more by visibility than adhesion.

Of course there are other reasons. There is something satisfying in hauling a big van around but, generally, I’d rather make the trip in a car that is more comfortable, with a better soundtrack and where the whole interface is more rewarding. But I’d be fooling myself if I thought it would be appreciably faster over a normal route. Certainly, when you get over, say, 160 hp in a normal sized car, you are seeing drastically diminishing returns. The 503 bhp of the new Giulia Quadrifoglio, like most the autobahnstormers it mimics, is just too much to really be any fun at all, except on a track.

Yet we want them. I admit to doing the sums regarding a three year old AMG Estate, convincing myself how useful its load bay would be and, despite the knocks it might have received over the past couple of decades, how reassuring it would be to have copper-bottomed Mercedes reliability beneath me and how it probably wouldn’t use as much fuel and depreciate as much as you’d think. Complete bollocks of course, I just wanted to hear that nasty big V8 and get the tail out on Wandsworth Bridge Roundabout. But what confuses me is why, with all these very fast cars around, I don’t see more people behaving badly. Not that I’m complaining; on one level it’s heartening that most people are more sensible than I might be in their position. Or does it come down to the answer that I received several years ago on another website when I questioned the reasons for purchasing a Veyron, which was broadly that it wasn’t a matter of actually driving at 200mph plus, but of knowing that you could?

For myself, despite the occasional lapse, I don’t really think that more is invariably more fun. And in the case of cars for the public road, I’m pretty sure it’s the opposite. Restraint isn’t just a matter of good taste, or complying with some nagging puritan ethic. It’s ensuring that there is still a place for you in the equation and, in a present of the hugely able super family car, and considering a near future of the unquestioningly competent autonomous car, I’d try to indulge in some restraint while I still can.