DTW discovers how to jump the queue at your friendly Renault dealer.

“Can you hear a whining noise”?

“I heard it a little while back, but it seems to be getting louder”

Hmm, the noise seems to rise and fall with engine revs more than speed, and it’s following us, so that means it is us. I pull off the road as soon as we see a parking area, and lift the rear hatch, casting my eyes and ears around the engine bay, trying to determine the source of the whine. It seems to be from the right hand side.

“Can you see a fine mist?” I ask. “Yes, down in the right corner” replies my wife. Not really what I wanted to hear, but it confirmed what I thought I could see – fine metal flakes emanating from the engine bay.

It’s Thursday morning, and we were making our way back to Amsterdam following a week’s holiday in and around Alsace.  We need to be back by Saturday, the car’s not sounding too healthy and this weekend is a long weekend in France.  An older gentleman comes over to check if we are OK.

“Maybe, maybe not” I reply. Do you know if there is a Renault garage near by? “Mais, oui”, and he motions off up the road, not far away in the next town.

Off we set, me keeping a close eye on the gauges, and we pull up outside what looks like a very busy garage. A few moments rehearsing my French, working out how to explain my predicament, and into the garage I go.

“Any chance you could take a look at my car, it’s making a funny whining sound, and we need to drive all the way back to Amsterdam tomorrow?”

“Sorry Monsieur, we are completely full, and it is a holiday weekend, everyone needs their car serviced”.

“Is there another Renault garage nearby?” I ask.

“They’ll all be full too”

“Anywhere else you could suggest that may be able to take a look at my Alpine?”

“Bring the car inside, we’ll see if we can at least have a look for you. Where are you from?”

“New Zealand, but we live in Amsterdam at the moment – the drive from New Zealand would be a bit too far!”

So, I drive the car into the packed garage, and everyone stops. The head mechanic is summoned and there is a bit of a discussion and chin rubbing. The head mechanic gets the car on the lift and has a look around. After a few minutes he informs us that the problem is the alternator bearings have seized, and it’s slowly destroying itself. We should not risk driving the car further. He asks us to wait while he checks to see if they can source the correct part today or tomorrow. After a few phone calls, he informs me that nothing could be delivered until next week.

After another chat with a few of the other mechanics and boss, they suggest that we both have a look around the town, have a long lunch and come back after 15:00h. With no other option, we do exactly as suggested.

Returning at 15:00h, we see the car still in the workshop. The boss meets us again, and tells us it’s all fixed! They couldn’t get the exact parts, but they had a similar rated alternator in stock for which they made a custom bracket.

“How much” I ask, not looking forward to the answer. “65 Euros”. I asked him to repeat the price, in case my French had suddenly deserted me. “65 Euros, that’s how much an alternator costs us. That’s all we are charging, it has been an honour to work on your car. Have a safe trip back!”

Now there’s a result, but in many ways, it shouldn’t have been that much of a surprise. We’d had so much positive reaction to the car, especially in France. On our last night in France, the owner of an old hotel insist that we park the car in the covered courtyard inside the hotel. We’d had gendarmes pull up along side and motion for us to floor it.

I saw my first A310 in New Caledonia, and thought it looked absolutely gorgeous, especially the glassed in nose cone. I looked for one in New Zealand, but there were none in the country. A few years later, a few GTAs were sold new, but they were out of my price range. However, now living in Amsterdam and having just gotten rid of the Alfa 75 V6 we’d bought in London, I was under instruction that I should get “any car you like as long as it’s a sports car”.  Now, I’m not one to argue with an instruction like that!

After some looking around, a few test drives and a bit more research, I’d narrowed my choice down to one of two rear engined, 6 cylinder cars. One French, one German. The realities of having to leave the car parked outside, and the fact that the A310 simply felt more special to drive narrowed the choice down to the Alpine. I found one I liked for the right price, joined the club, fixed some niggles (mainly down to lack of use) and started using it as my everyday car.

The A310 was the successor to the famous A110, a car with extensive competition history. It was larger and heavier, more GT than out and out sports car. The first versions, released in 1971, had a 1600cc four cylinder engine from the A110. This model featured six lights behind a glassed in nose. The A310 would have to wait until 1976 to get the power it deserved, this time from a 2.7 litre PRV V6, but with a four speed gearbox, and the front end was changed to four lights behind glass covers. Whilst the engine is not particularly powerful, it only has 1000kg to push around. I went for the later series two, in this case a 1983 model year, which came with the 5 speed gearbox, and it’s even got air conditioning fitted as standard. The alloys are gorgeous 3 piece Gotti wheels, shod with 15″ Toyo Proxes.

Work commitments had me driving all over the BeNeLux region in it.  If the client saw the car, that usually wasted a good half hour discussing the pros and cons of running such a “work” car. We went away on holiday in it around France, Germany, Luxembourg and The Netherlands. The only time we ever felt uncomfortable in the car was travelling over some appallingly maintained roads in parts of Belgium which threatened to shake the car (and us) to bits. It was rock solid at 240 km/h down the autobahn, and an absolute joy to drive round the twisty bits in France. While the (front) boot wouldn’t hold much in the way of luggage, the back seats and parcel shelf could hold quite a lot. Stopping for some boxes of champagne?  Pas de probleme!

With the arrival of our son, we made the decision to come back to New Zealand. The house was packed up, and I confirmed that I could bring the car back without problems, since I had owned it for more that six months. The car was given a fresh APK (Dutch road-worthiness check) prior to it being put into the shipping container – divided in two with the car secured in one end, the rest of the household belongings in the other. I’d also made sure I’d packed a selection of spares, since there was not likely to be a ready supply back home. 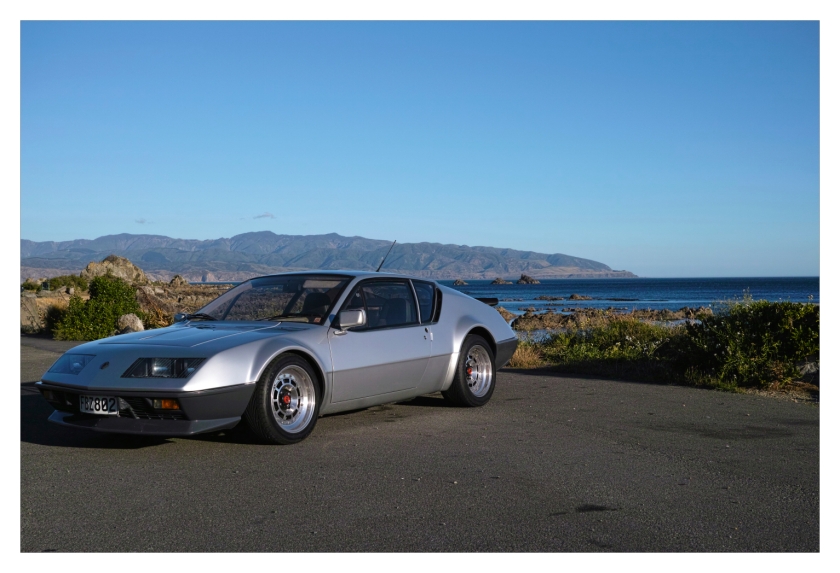 Further bad news arrived a week later when the certifiers checked the car. Apart from the shipping damage, they were concerned about some areas of surface rust that they could see on the steel backbone. They would not certify the car until they could see the full extent of the rust. That meant separating the body from the chassis. And so began the journey of the contents of my wallet to another destination….

After some asking around, I decided on a company that specialised in restoration work not far from home, and I decided that we’d do a fully body & chassis restoration over a couple of years. The interior could wait until the New Zealand sun had done its worst on the original.

After an eventful couple of years, including the challenge of finding suitable RHD headlights, the car was almost ready for me to collect. Now to register it for use on New Zealand roads. Land Transport needed details from the manufacturer in order to decode the VIN number.  Ordinarily that wouldn’t be too much of a problem, but it was the beginning of August. And in August, there’s no-one in the former Alpine factory in Dieppe, nor many Frenchmen in any factory in France! Fortunately a considerate official accepted details from a specialist A310 book, confirmed by the Dutch Alpine club, and we also managed to confirm that this was indeed the only A310 V6 registered in New Zealand

So, one wet early spring day in September, number plates in hand, I went off to collect it. I’d forgotten quite how low the car was!  It took a few moments to re-acquaint myself with the car, but after a few kilometres, I started to recall the narrow gear change gate, the smell of the car, the talkative steering and the feeling of being at the same level as most other vehicles hub caps. Oh, and given the rain, those wonderful drunken “clap hands over your head” wipers!

There are some fabulous roads nearby that snake their way over the many hills and mountains round the southern North Island, roads that I know will feel like they are made for the car.

Bienvenue à Nouvelle Zelande, Alpine. Let’s see what living with such a rare car, as far away as it is possible to get from your homeland, is like. But that’ll be a story for another day.

21 thoughts on “Not Your Regular Renault”