People judge the Sorrento-Amalfi coast road to be among the most beautiful in Europe and I drove it. But…

…night had fallen even before I got there. The last shred of daylight flickered out as I turned off the motorway for Sorrento. How did I leave it so late? The car rental process wasted a precious 40 minutes of my time and it took an hour to escape Naples. The walk from the terminal to the car rental bus-stop took a while. So two or more hours slipped through my fingers after touchdown.

So, the street lights glowed by the time I emerged from the last of the long, crumbling, littered, grimy sewer-like tunnels that connect the outskirts of the fringe of the sprawl of Naples to the Sorrento road.

After the last tunnel you reach the Sorrento-Amalfi road (it’s a lane) and you find a sequence of hairpin bends and blind corners stringing together several fishing villages-turned-holiday-hotspots. A few elegant hotels perch alongside the road as well. Pizza can be found almost anywhere to judge by the splendid abundance of outlets for this renowned food. I would not like to be on delivery duty in this area because what makes the drive so beautiful also makes it incredibly dangerous.

The road not only bends side to side but also rises and falls, often doing both at once. It’s the rising part that makes for the impressive views (during the day) and also for the marked hazard. Should you lose control of the car, there are long (albeit picturesque) drops to the sea below. I assume any falling object would bounce like a cork down the cliff-face before submerging into the refreshing azure waters below.

The veil of night kept the full scale of the hazard from the forefront of my mind. The satellite navigator which I had attached to the centre of the screen also obscured things. It kept falling off. And that brings me to the ride quality of the C1: knobbly. 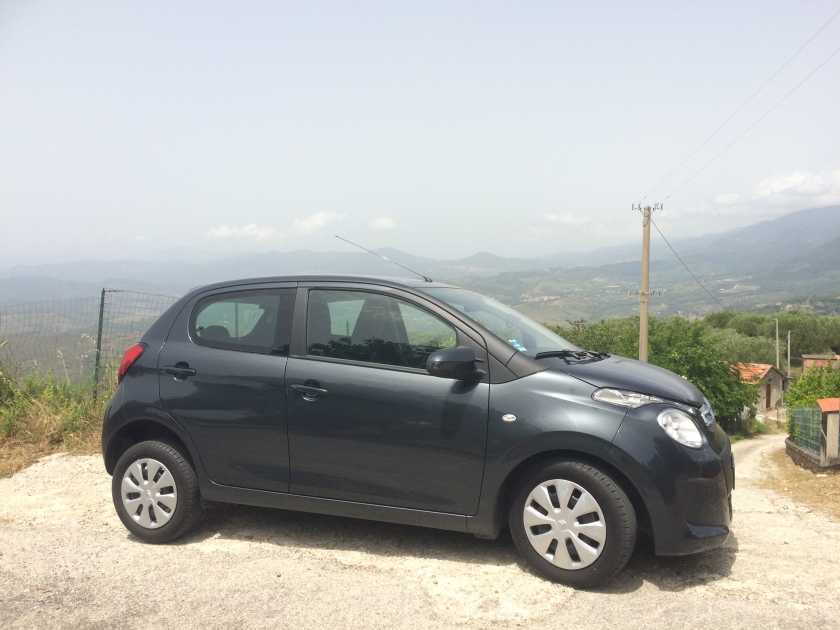 Darkness focuses attention on two things: the road itself and the car. I am not exaggerating very much when I say that for the two hours of the drive from Sorrento to Salerno via Amalfi I did not use fourth gear at all except by mistake. Some of the corners were so slow and steep that I wanted a gear between 1st and 2nd. You can take a look at the map to get some hint of the amount of cornering involved. I needed to look sideways a lot and the TomTom clung right in the way so when it clattered onto the dashboard for the ninth time I left it chuntering in the footwell where it came to rest.

To the credit of the C1, it turned out to be almost exactly acceptable; anything bigger would have been grated against the cliff faces and close walls like Parmesan on a rasp. The quality of the C1’s steering, clutch, brakes and gear-change also impinged on my awareness. If a motorway shows up the limits of a small car, this road reveals the limits of a larger one: top speed, space, refinement and stability mean nothing when all the action takes place between standstill and 45 kilometers per hour.

The clutch proved smooth and light. The brakes didn’t give up and, apart from misplacement, the gears didn’t get in the way. Cost-cutters at Citroen didn’t think to fix the gear-knob properly so it rotated on its metal wand due to the frequency and urgency of use. A first this: I got sore hands from all the wheel twirling and what started as a nicely grippy rim came to feel like sand-paper.

My zig-zagging also made me aware of a new possibility. Even the driver can develop mild motion sickness if the car turns often enough. I won’t call it strong but it malingered, just at the threshold of onset.

So, what did I extract from this sustained wheelmanship? The C1 is only not bad. I think it constitutes a missed opportunity to make the most of a very small car. Minor adjustments to the steering ratio and to the suspension would bring out a car capable of delivering more pleasure in the low to medium speeds.

By rights, a road as challenging as the SS 163 ought to have allowed even an ordinary runabout like the C1 to shine a lot more than it did. The moment of understanding came as I left Sorrento and I realised it would be a long and rather tiring ninety minutes until I reached the other side of Salerno. Tyre scrub and the missing half-speed drained much of the enjoyment.

The designers programmed the C1 to stick resolutely to the road and that the noisy little engine misses some low down poke to make the most of second gear. The classic Italian car reputedly leans towards this formula. The conditions in Italy explain why those cars have those characteristics. Even if a large part of Italians’ attachment to Fiat may be explained away by national pride, some of the enduring popularity of the cars must be attributed to their fitness for the environment they must cope with.

Looking back, I think I might have blundered in not stopping in Amalfi. Even at 11.30 at night the place buzzes (small cars and people talking) and the peculiar combination of cliffs and classical vernacular architecture makes for a memorable scene. I did also wondered as I came to a halt in sight of the harbour that I don’t know what I would do all day there.

Crowds swarm and you might not find the peace to sit back and meditate on its pleasing visual attributes. At some point in the dim past it probably had few visitors because the only way there involved gravelly, shaky tracks and horse-drawn carriages. These days, nothing stops as many visitors cramming themselves in as the place can accommodate and surely that detracts from its natural charms.

The price of a slice of pizza Neapolitana must be the same as a square metre of Manhattan real estate if supply and demand are still on talking terms. I can’t quite tell if I want to go back and take another look during a more sensible part of the year like daytime. The sobering fact that overtaking on blind corners does not only take place in the same direction you are going does put me off. There must also be senseless optimists coming the other way sometimes.

And I saw at least ten instances of blind overtaking in two hours, one involving a Porsche 911. How it must be between 8 am and nightfall is anyone’s guess. The only encouraging sign lay in the absence in recent holes in the low barriers separating vehicles from a scenic departure out of this troubled world.

The C1 got me to where I wanted to go and did a reasonable job of it. And no more. Perhaps the darkness served some purpose. In depriving me of the panoramas that make Amalfi famous, the equation involved only the car, the road and me. I really wanted a Peugeot 205 with its supple suspension, communicative steering and its willingness to turn about its own axis. Perhaps a tiny roadster such as Daihatsu Copen or Honda Beat might also fit right in.

The C1 costs very little and it has cheerful upholstery but offers little more. I can conclude that not even a road as richly inflected as along Amalfi’s coast can flatter a vehicle where the manufacturer did not engineer in even a small amount of fun.