The sills are badly perforated. Goodness knows what’s under the car. This rot’s not shown in my photos, taken in a pretty part of southern Denmark (not the area right around the car). The bumpers are faded. Note the driver’s door toproll is safely secured with two screws that most likely weren’t there when the car rolled of the line at Ford’s Koeln plant in 1983. The rug comes with the car, justifying the 9100 kr asking (I think the rug costs 100kr). The 2.3 litre V6 would otherwise be a nice version (114 ps) but not this example. The colour is sad. I looked for a 2.3 in 2004 and failed to

find one so I bought another XM; the day after I drove home in my new steed I saw a clean, metallic red 2.3 Granada for sale at the end of my street for €1500. Fancy that. It was an L as well. 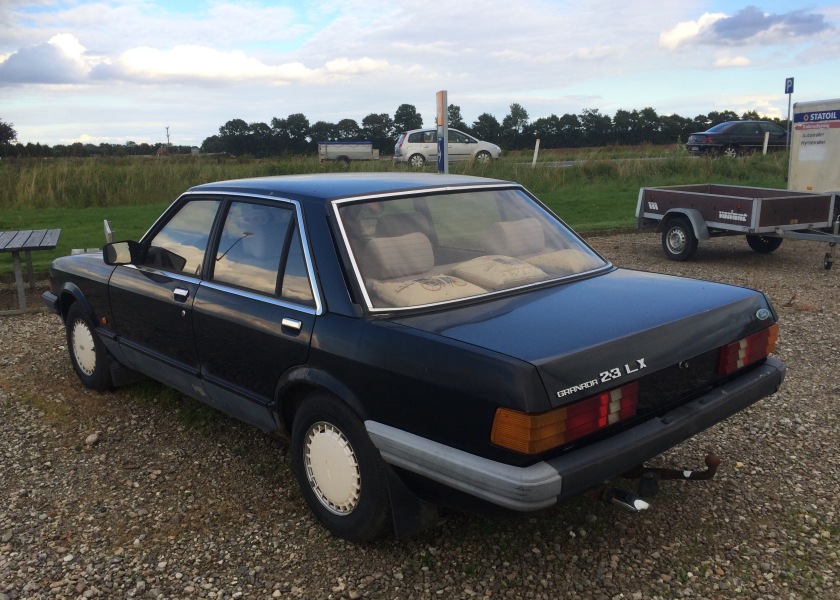 In the back of the saloon we have some of Ford’s less alluring upholstery. By 1983 we were into the prolonged global grey era and this sort of thing became standard fare.

The ashtray: located on the armrest so you can’t rest your arm. It’s not

sitting properly: a €500 repair, surely. More seriously the plastic foil on the toproll is peeling around the window spar. Peugeot fitted small metal sheaths on the 604’s top roll to stop this very thing happening. To be fair I’ve seen younger 760’s with the same problem. Ah, no map pockets. Is this really an LX as claimed? It seems more L or GL to me. The X on the badge is not, in fact, original. It’s really an L. Naughty vendor.

Outside we find plastic Ford hub-covers, giving the rectilinear Grannie a sporting vibe? All of this is described oxymoronically in the window hanger as “well-maintained for restoration”.

Maybe this could be a Gorfe Granada.