Japanese cars from the eighties and even before have more or less disappeared from our streets.

Nobody seems to care for giving them collectors’ item status, except for some exotic sports cars maybe. All the bigger was my excitement when I discovered two Japanese everyday cars on dealers’ lots recently. The first example is a 1979 Datsun Sunny estate in a very nice pale metallic green, typical for this time.
The car seems to be in good shape, apart from a slightly bent front bumper there are no obvious dents and scratches, and no rust is visible (I didn’t crawl under the car, though). The paint is probably not the first one. The seller claims 66,000 km and the possibility of a ‘veteran’ registration – which in Switzerland means that everything has to be original and in good, restored condition. The way it’s formulated lets me think that this status will not be achievable without a little work. The car is yours for 5,000 CHF (negotiable). 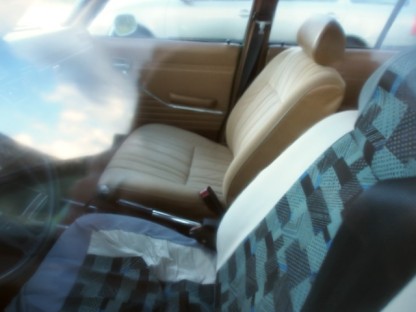 What’s hiding under this seat cover?

A bit less shiny than the body are the interior parts. The seats are a nice light-caramel colour and have thick velour upholstery. The driver seat might be quite worn, as it has an ugly cover, the rest seems OK and not too affected by sunlight. The boot carpet is scrap, though, and the random selection of objects scattered on it does the sales prospect no favour. Why doesn’t a seller invest two minutes and cleans this mess? At least the plastic bag is an item of nostalgic value; I remember those from my childhood, coming from a local fashion store.

Some odd trim items can be found on this car, for example the extra piece of rubbing strip on the fuel flap or the inconsistent badges – I wonder if the one saying ‘Nissan’ in a non-matching typeface is a later addition. The ones on the side are just as I remember them from the eighties: chrome flaked off and showing ugly beige-ish plastic. 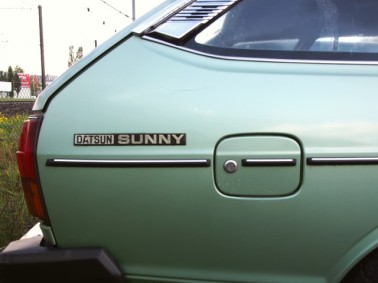 They went to great lengths with the rubbing strips

When I researched this car, I had the impression that it looks quite stately and large on pictures. How small it is to today’s standards, with its tiny wheels, narrow track and 234 cm wheelbase, becomes obvious when seen next to some Octavias.

A nice rear view with the inclined hatch 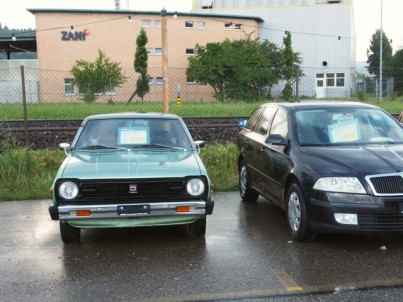 Later on, I discovered this gem:

This Toyota Corona Mark II clearly shows the traces of 47 summers. It’s standing on a car dealer’s parking lot just ten kilometres from my home. There are no informations displayed, so I’m not even sure if it’s really for sale. At first I was astonished to see the ‘1969’ numberplate, but I found out that Toyotas were actually imported to Switzerland from 1967 on. Most other European countries only saw them in 1970 or 1971. I think I still remember these cars with the characteristic front design from when they were new(ish) – that is, maybe eight or ten years old.

The example here seems complete and without damage on the bodywork, but it has suffered a lot from the sunlight. The paint is dull and flat and starts cracking in places. The interior is in comparable condition, with the parts beneath the rear windshield in worst shape, obviously.

The paint is already cracking 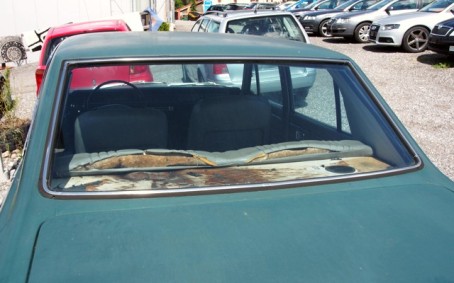 Too much alpine sun

While I thought back then that Japanese cars are quirky and ugly, I can now appreciate that this one is actually quite nicely made. The shapes are fluid and rather distinctive. Nice details enhance this Mark II and put it a class above the standard Corona which is also slightly smaller. Chrome trim is abundant and sometimes done in unusual ways, as in the little grille behind the side windows or the headlight surrounds, both showing a peculiar, rough surface finish.

I must say I have fallen a bit in love with these two survivors, and I truly hope they find their enthusiasts who continue to take good care of them. Anyone here interested in a Swiss shopping trip?

8 thoughts on “For Sale in Switzerland – Japanese Rarities”