This one got me thinking.

The 1975 AMC Pacer is one of those famously unsuccessful cars to list with the Pontiac Aztek, Chevrolet Corvair, DeLorean DMC-12 and perhaps the Tucker Torpedo. As a resident of that list, it’s also routinely jeered at due to its appearance. I’d like to take a different tack with this and reflect on what is right with the car and also to consider the possibility of taking enjoyment in other people’s enjoyment of a car.

I spent about an hour and half among a collection of classic and youngtimers this Saturday in Silkeborg and it was the owner of this car who’s pleasure struck me as the most apparent, heartwarmingly so. Some of the other attendants almost seemed to find interest in their cars unwelcome or puzzling – maybe that is an aspect of Danish modesty turned sour. In this case, I took a close look at the Pacer and found it an entertaining piece of industrial design. In order to understand it, if not like it, you need to know that the designers conceived it as a response to changes in driving conditions in the late 60s: more cars, more traffic and expected higher fuel costs.

AMC, as a smaller firm, lacked the resources to execute what was an ambitious re-imagining of the American car. They wanted a new engine, something avant garde. Instead of a rotary engine, the car received a 3.8 litre straight six, due to a mass of difficulties with obtaining a source. That required a hasty change to the front architecture: the six ended up quite far back relative to the front axle and weighed much more than the intended rotary engine.

The suspension borrowed from AMC’s existing stock. The front suspension design had a separate sub-frame with rubber bushings, with consequences unwelcome for handling. While Europeans were, by 1975, accustomed to FWD, for Americans it had either no meaning or could be seen as a problem. As it stood, AMC’s production lines handled RWD cars and adding a FWD vehicle would have meant costly extra investment. With RWD came a bulky transmission tunnel that ate into rear passenger space.

From our vantage point, the car’s appearance is decidedly strange. As the saying goes, history is written by the winners. That winner in this race has to be the formula manifested by the FWD VW Golf. For an American designer in 1971, when the Pacer’s development began, that formula must not have been obvious, which we must remember.

In fact, the start point lay in the norms of American car design and also in the realities of AMC’s own products. That meant lopping off length from the B-pillar back and using conventional arrangements up front. That lends the car the unusual proportions it has. Next is the width: the car is as wide as an American medium-sized car of the time because Richard Teague, the designer, realised that customers might accept a shorter car but not less space from side to side. The praiseworthy wish to have a bright and airy cabin led to the glass area being well above average. Thus the glass house dominates the car’s proportions.

Car designers try to pre-empt the future and that’s always a tricky business. Teague hoped that customers would get the design, understand its purpose. In some cases such hopes are rewarded, if the concept brings with it palpable advantages. Alas, AMC’s tricky financial situation and the lack of accepted norms for small American cars meant Teague’s eventual design lay beyond the realms of what customers felt acceptable. As this excellent article notes, the disappointing fuel economy, poor performance and relatively high price made the car’s appearance harder to deal with. Modern examples of this problem include the Fiat Multipla and the Renault VelSatis. As Raymond Loewy said, you need to go no further than the customer can accept.

Putting those matters to one side, if we look at the car afresh we find a fascinating mix of modern and traditional details. The Pacer is a manifestation of the American car industry struggling to translate the big car ideal onto the small car ideal. Some aspects such as the generally smooth forms are quite advanced and you can see a flavour of the Porsche 928 but draped over less satisfactory proportions. The brightwork is very Detroit: the car has lots and lots of it. UnDetroit is the aerodynamic flush door frames, something Detroit would not get around to for nearly another decade (the 1983 Mercury Cougar had them – was there an earlier mainstream car with this feature?). The windscreen wipers sit under the trailing edge of the bonnet. Citroen didn’t manage this on the CX of 1974 nor Mercedes with the justly lionised W-124 of 1985. 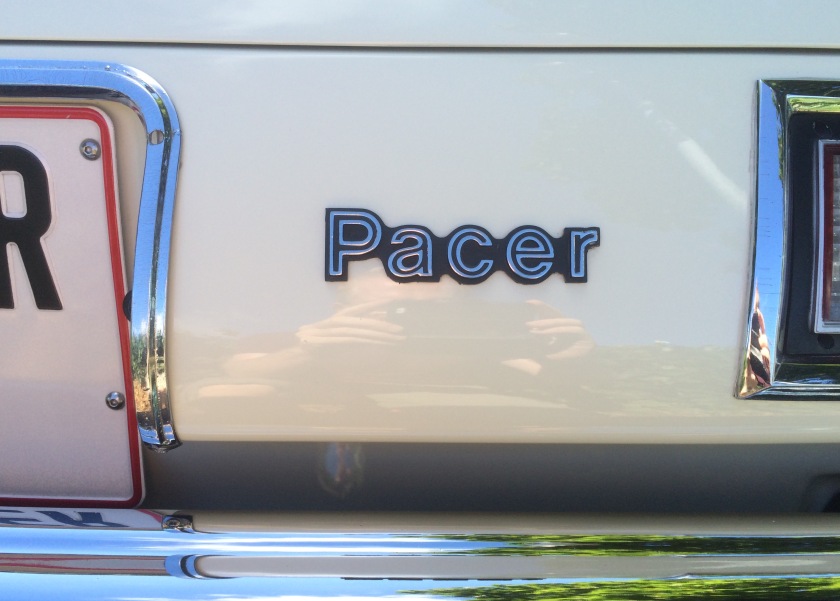 Elsewhere here I have mentioned how one can express the meaning of a form by accentuating a detail. AMC wanted the Pacer to meet and exceed projected roll-over standards and planned a stout roll-bar over the glass house. The thick B-pillar and the transverse rib in the roof probably existed to articulate this important feature. Alas, the regulation didn’t come into force but the Pacer still had that vacant feature. And this is where we can refer to Gestalt theory again. The strong vertical band of the B-pillar, related to the roll-bar, interferes with the front-to-back flow that usually looks better on a car. It also seems to accentuate the car’s shortness and disrupts the unity of the car: you read the front and back as being less of a whole than one would prefer them to be.

With that in mind, I hope it’s not too cognitively dissonant to consider the car favourably anyway. I admire the designers’ wish to experiment and try new solutions, to re-invent the future. Especially considering the sometimes leaden conservatism of Detroit, such a car is admirably brave. It also serves to makes us more alert to the significance of the formula we take for granted: a front-drive, four-cylinder, two-volume car of 1000 kg. I’d also like to salute the people who have affection for cars like the Pacer because absent their ability to see beauty where the rest of us can’t we’d not have the opportunity to enjoy looking at alternate futures and to question the norms we take for granted.

[The V8 engines weren’t available on the Pacer until 1978. This car has a retro-fitted V8, hence the registration plate.]