I had high expectations of Friedrichstadt, a perfect little displaced Dutch town in German Nordfriesland, but they didn’t include two Alfa 2600s.

Their presence was unexplained. No ‘Oldtimer’ gathering, no other participants on a one make outing. I would hate to think that they had just ‘failed to proceed’. The 2600 Sprint’s charms are beyond dispute, but a bit of fact-finding on the Berlina sprung some surprises. 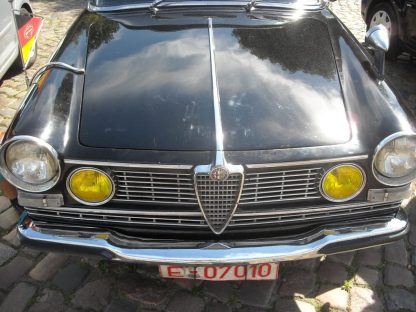 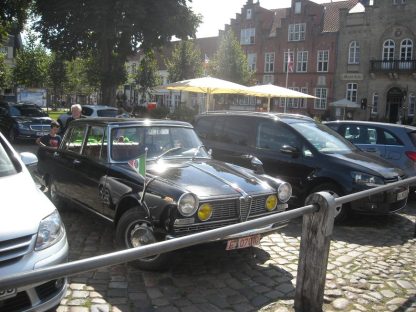 As far as its “dogma-free” remit permits, DTW is rather fond of large Italian saloons which fell somewhat short of their manufacturers’ commercial ambitions. The Fiat 130 and Lancia Gamma typify the phenomenon. For both there was modest consolation in glamorous and well regarded coupé variants which accounted for around a quarter of production numbers.

So the Friedrichstadt Berlina is the real rarity, one of 2092, making the Austin 3 litre, Vanden Plas 4 litre R, and Borgward P100 look like rip-roaring successes. Alfa didn’t invest too heavily in the Berlina, which is a nose-and-tail job on the preceding 1958 four cylinder 2000. The reader can make their own judgement on the ameliorations, for me the efforts to eliminate the ‘so last decade’ rear tailfins are a less than elegant solution.

With the benefit of fifty years of hindsight, the tall-grilled, tail-finned late fifties 2000 Berlina body seems to work better. The 2600 engine story interests me. The old 1900 / 2000 engine was an iron-blocked long-stroke four, topped with a version of the classic Alfa alloy twin cam head. As the 2600 engine is all-alloy, logic would suggest a 750/105 engine with another pair of cylinders. Which is to forget that this is Alfa Romeo we are talking about.

The 2600 engine’s origins are in a mid ‘50s design kicked around by Satta, Hruska, and Ciacca, with competition central to the brief. It owes more to the older, more generously sized, iron blocked 1900/2000 four than the Tipo 750 Guilietta engine in its fixed points, allowing bigger bearings and oversquare cylinder dimensions. The production engine’s 83 mm bore and 79.6 mm stroke are not too extreme by ‘60s standards, but every variant of the 750/105 engine was undersquare, with the exception of GTA 1300 Junior – 78 x 67.5, before you ask.

All of which is peripheral to a moment of happy serendipity in North Friesia. There’s more to that part of the world than cows, cabbages and canals – there’s the law of attraction in action.