The Estate Car seems to have lost favour though, in many ways, it never was in favour.

The Estate Car was the car you bought when you had so many obligations and so much responsibility that you couldn’t afford to indulge yourself with the car you really wanted. Its name, of course, like its US equivalent the Station Wagon derives from the upper echelons, but even there it was just a tool to carry around steamer trunks, whilst the important people were often carried in the back of something grander.

After that, if you couldn’t afford servants to do the lugging around for you, you bought an estate for your own use instead – a lumpy, unloved workhorse.

Well, that’s what I assume is many people’s view of the estate car, though it was never mine. Apart from my old Citroen, I have never owned a car with a proper boot. I have always wanted that loadbay, first with hatchbacks then, when I could afford it, a proper estate. Partly this was to do with the very real needs of my job, though that requirement is not so great now since I have access to vans and such-like.

It is also, maybe, to do with a less real need, that is the desire to be feel useful. So, just as the sports car is the fantasy compensation symbol of certain middle-aged men, maybe the estate car has filled that purpose for me. I certainly remember poring lustfully over pictures of the new Peugeot 505 Break when it was released.

Mind you, I also admit to having always had boy-racer tendencies, which sat at odds with the staid estate car image. For many years practicality won out in my desires until, in 1981 VW introduced the Passat Variant Syncro. Now, this was no hotshoe estate in itself but, sharing the mechanicals with the Audi Quattro it seemed to me ideal if they went the whole route and made a fast, 5 cylinder turbo powered, 4WD estate car. Surely I wasn’t the only one who wanted one. 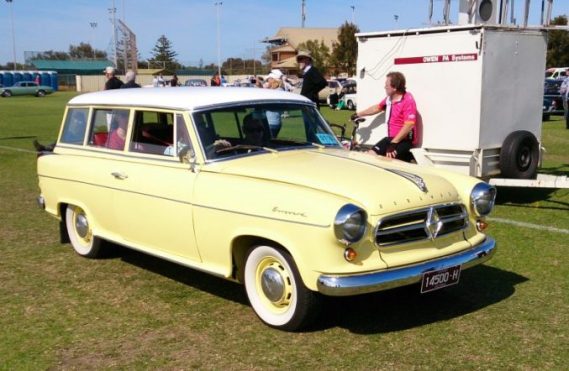 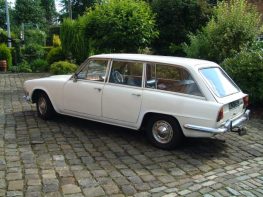 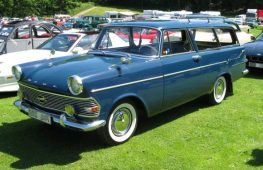 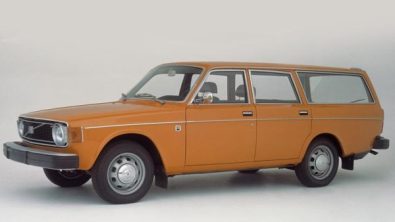 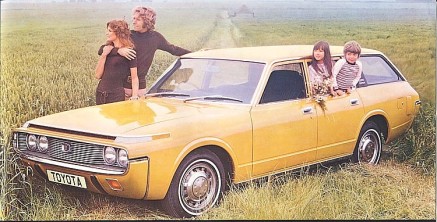 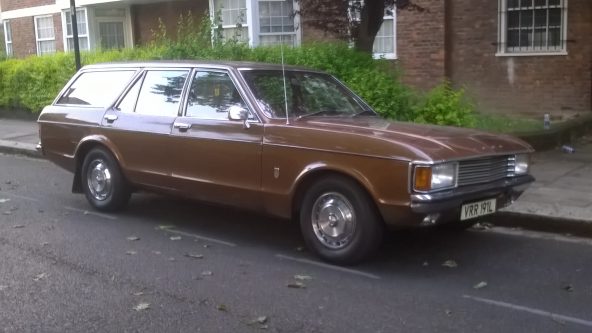 Estate cars in the luxury/executive car range were once very rare in Europe. In the UK, Triumph produced the nice 2000/2500 Estate, but Rover and Jaguar stubbornly refused to produce estates, leaving it to the likes of Ford and Vauxhall. There was an undoubted hint of snobbishness in this stance. If you wanted a big comfy estate, France was the place to go. In the 60s, 70s and 80s, the French were the masters of the art, with the Citroen DS, CX and XM and the Peugeot 404, 504 and 505.

Volvo too got in with the antique dealer’s favourite, the 145 followed by the 240 and 740. The Volvo 145 is a good point to discuss the commitment of a manufacturer to a decent estate. It was OK, but its handling was not in the French league. A clue is that it had the same dropping rear side door as the saloon, with a little infill above to ‘straighten’ it. This confirms that it had the same wheelbase as the saloon, but it’s not enough to stick a box on the back of a saloon.

Citroen and Peugeot both used unique rear passenger doors, indicative that they both had longer wheelbases than their saloon equivalents for safer handling. It was a sign that Citroen were losing it when the BX Break did the same thing as Volvo.

Meanwhile, in Germany as in the UK, although Borgward had produced a Combi before it went under, large estates were seen to be the province of Opel and Ford, so the 1977 Mercedes W123T, ironically built in the old Borgward factory, was hugely influential in raising the estate’s image. Until then, the only Benz estates offered were conversions by the likes of Crayford.

I remember the discussion as to whether a Mercedes Estate really made sense, but thousands of W123 and W124 owners proved it did. All the same, Mercedes’ German rivals took some convincing. BMW didn’t introduce a 5 Series Touring until 1990 with Audi releasing its first proper estates around the same time – previously it had offered the, rather perverse, mildly useless, sloped back C3 100 Avant.

But at this point, Audi suddenly, and literally, went into overdrive. It first offered the turbo 5 quattro drivetrain in the 100 Avant (called confusingly in hindsight S4). Then, in 1994, it produced the 80 based RS2 Avant, Porsche developed and very, very fast. It also put the V8 into the 100 Avant to give the S4 Plus. Two years after introducing its Touring, BMW introduced an E34 M5 Touring.

Although the Audis led to the RS4 and RS6 Avants available to this day, oddly BMW’s hot estates have been sporadic. No E59 M5 Touring was offered, the Bangle E60 Touring was offered as an M5, but then the M5 touring disappeared again – though there is always Alpina. Mercedes however joined in with both C and E Class AMG Estates.

Whilst all this was going on, in Japan, Subaru had been plowing their own, characteristically individual, furrow. Starting at the end of the 80s with a 4WD Legacy estate, they soon started uprating the engine and, by the mid 90s, were producing the relatively discreet but rather fast GT-B. But, I can’t help suspecting that Subaru were slightly distracted by WRX inspired performance fever in the 90s.

Sales of the Legacy in Europe dropped somewhat early in the last decade and, in the US, where they always had a solid base from people who needed a competent 4WD load carrier, but didn’t fancy the machismo of a default pickup, the drop was even greater. But although you might not think of them that much, these days they actually seem to be selling very well.

Anyway, all the activity in Germany shook things up. The estate was finally being seen as an aspirational vehicle. In time, even Rover and Jaguar finally joined in. Naturally, aspirations and do-it-yourself don’t sit well together and, inevitably, the posh estate lost practicality.

A recent drive in an Insignia Estate, sorry Sports Tourer, confirmed exactly what its name suggests. Opening the rear presented me with a yawning chasm – the one in my life waiting to be filled with the sort of lifestyle choices that the odd shaped opening and relatively mean but immaculate loading bay of the Insignia presumably caters for. But, of course, in reality even lifestyles need space and, when you consider these cars, it’s a pain even fitting in a mountain bike or a ……. oh, the sort of gear for whatever other leisure activities I’m missing out on …. so manufacturers surely do no-one any favours in the end.

Yet, suddenly anxious to aspire to be like other car makers, those one-time producers of the sensible, bourgeois mega-estate, Peugeot and Citroen produced the awful, overstyled 407 and the less awful but not that useful second Series C5 Estates – the first C5 was, actually, a pretty decent estate in the old Citroen tradition and, like most of today’s Peugeots, the current 508 is at least better than its predecessor.

Naturally, comfort struggles against practicality in an estate. For me, the perfect estate has a long, wide, high, stepless loading bay, with completely fold flat seats and, ideally, a folding front passenger seat for those very long items. But folding seats often mean that you restrict space for nice, springy cushions and well postured backrests. My own experience being a passenger in the rear of a W124 Estate was that it was a bit too bench like.

But these challenges are to be overcome, not avoided. And, on another contentious compromise, we’ve recently discussed the worth of the ‘lost’ loadspace caused by the angled rear of a hatchback and, indeed, most modern estate cars. For me this is crucial but, it seems, for most people the presumed aesthetic improvement of an angled rear door is more important than ultimate loadspace. The Mercedes CLA and CLS Shooting Brakes are, I guess, as relevant to a load carrier as a pair of €800 designer jeans are to workwear. They just shout out ‘I’ve made it, I don’t need practicality’.

The MPV was the first sign of the estate car’s decline. The floor was in the same position, but the roof was higher, thus increasing its useful boxiness. This seemed to be the logical evolution of the estate, the next step, and I was an enthusiastic early adopter with a Series 1 Espace.  If this had been where all estate car sales would go in the future, I would accept and understand its decline. But the car market’s an irrational place, and the MPV’s star has also faded in favour of the SUV and the Crossover. Also the 4 door pickup takes quite a few sales that could go to estates. In some parts of the world this makes sense, but in an urban environment what does it offer besides posturing?

The physics of load carrying is often given little thought by drivers. Self levelling, as with old Citroens, is a boon, but trying to keep the main weight of the load as low and far forward as possible is wise. Also, giving some thought to which items might become lethal weapons in an accident is sensible. Today’s high-riding vehicles don’t increase loadspace, they just move its content’s centre of gravity higher. Most people seem happy with this which, in marketing terms, means that they are right. Modern chassis technology means that high riding cars can corner perfectly safely and many SUVs amaze with their prowess. But physics is physics, and a low estate car will always be dynamically superior.

Today, assailed on various fronts, the estate’s tailgate appears to be in terminal descent. I miss the proper estate car. For sensible me, the ultimate would be a well-preserved Citroen CX Break (or Safari as they said in the UK). Or, since I currently drive an estate car, albeit a rather short and odd one, a stretched Cube or one of its Japanese cousins might be ideal.

For hooning me, I did consider a grey import Legacy Second Generation GT-B years ago, but felt that Q-car anonymity shouldn’t extend to the very dull interior. However my fantasies don’t actually end with that or a noisy Audi RS6. Encouraged by ownership of my Audi S6 (loadspace too high due to rear diff, etc) a couple of years ago I just missed a fine sounding, high-mileage but realistically priced, E34 M5 Touring. Of today’s offerings, I’d possibly prefer a Mercedes AMG, but these cars all suffer from the compromises dictated by their styling.

Far better and capacious would be the one-off Agnelli Lancia Thema 8.32 or one of Paul Newman’s Ford V8 powered Volvos. But if you really wanted to say ‘I’ve made it and I’m loaded, but that’s because I still buy all my stuff at the Cash & Carry’, there’s always the Bentley Turbo R Val D’Isere conversions made, apparently, for the Sultan of Brunei and featuring part-time hydraulic 4WD.

Incidentally, if you think that no-one can get excited over estate car ownership, my picture researches led me to the site of an enthusiastic owner who has lovingly restored a Mercedes W123 turbodiesel. It seems a very comprehensive and informative site, so comprehensive in fact that it includes some of the least likely babe’n car shots imaginable. Naturally, they are not DTW appropriate but, in the context of the car, oddly endearing so, if you are interested……….

16 thoughts on “Art of the Estate”