For many eyes, the car above is, irredeemably, depending on their country, a VAZ or a Lada or a Zhiguli, a vehicle that citizens of the former Soviet Bloc view with a frustrating mixture of contempt and affection. To me it is (and in this example, correctly) a Fiat 124, the first car that I had free, unaccompanied access to the open roads in, with all that allowed, so anything that follows might have to be filtered by the reader to allow for the rosy glow of nostalgia, although actually it’s a frustrating mixture of contempt and affection.

In the mid Sixties, Fiat was in its minimalist phase, even its model naming system had been pared down to simple project numbers. Project 123 was the front wheel drive mid size saloon that was to become the Autobianchi A111, but was likely deemed too costly or too big a risk to market as a Fiat. Project 125 was to be a slightly larger saloon that would use the outgoing 1500 as a base. And Project 124 was going to be the big seller, a conventionally engineered three box, 5 seater saloon.

1964 saw the Russian town of Stavropol-on-Volga being renamed Tolyatti, after Palmiro Togliatti, head of the Italian Communist Party, who had died that year. In Italy his was by no means the insignificant position it would have been in most other Western countries. With 25% of the national vote, the party was a real force and trade with comrades in the Soviet Union was encouraged. Togliatti had been involved in the first phase of a long period of negotiation between Fiat S.p.A. and the Soviet Union to build a car factory in Russia. The agreement was finally signed in 1966 and this is, inevitably, linked with the 124’s genesis and fate.

Our white, family 124, made in 1968, bought second hand one year later, might or might not have been made from notorious ‘Russian Steel’, said to have been part of the Togliatti deal, but it rusted like there was no tomorrow, and there was probably very little tomorrow for TMV366F. When it was around three years old, the clutch pedal suddenly fell to the floor on me as the cable tore free of its corroded bulkhead hole. We finally got rid of it in 1972, at which point rust-fighting was becoming a rearguard action. Although still a good looking vehicle if you stood back, mostly thanks to my ongoing work with plastic-padding and touch-in paint, I’d be doubtful it saw the birth of punk, let alone Mrs Thatcher’s election.

But, in other matters, I still hold it in high regard. Although actually the size of an Escort, a car viewed as a small saloon, the 124 always seemed a bit bigger, nearer to a Cortina, possibly because of better design, possibly because it was marketed as such and Italian cars in any category were often physically a bit smaller than their counterparts. Unveiled in 1966 and winner of the 1967 European Car Of The Year, it’s obvious that, in concept, it was intended to reflect some of the character of the Alfa Romeo Giulia, but at a Fiat price. Though Lampredi’s engine was only in 1.2 litre, 60 bhp, pushrod form for the basic 124, it was willing and had a fine gearbox. The rear, coil sprung axle was well-located with trailing arms and a Panhard rod, the all round disc brakes were effective and, in specification and in behaviour, it shamed any standard Escort or Cortina. I’d taken driving lessons in a coke bottle Vauxhall Viva HB and the Fiat showed it up for the slovenly thing it was. It came, as standard, on Pirelli Cinturatos, a fine looking tyre with an excellent reputation. Nevertheless after two scares, a lurid twitch on a wet road and a 180 degree spin in the snow, neither of which could possibly have been down to error on the part of the 17 year old driver, I resolved that a change of brand would be necessary when wear dictated. So Goodyear G800s were fitted in due course and the, by then, 19 year old driver seemed to detect an improvement – or just maybe he’d improved his driving.

The 124 spun off a load of variants. SEAT in Spain produced their own version which differed slightly, then a bit more after 1974 when Giugiaro gave it a facelift – at least it was more deserving of his talents than the Marina. The 124 Special saw a bigger engine and the 124 Special T saw a 5 speed box and the Lampredi twin-cam to give even more of that Alfa Giulia feeling. There was also an estate and, of course, the cars most readily associated with the 124 name these days, the fine-handling twin-cam Coupe and the long-running Spider. These last two are both very desirable cars but, for me, it will always be the saloon. 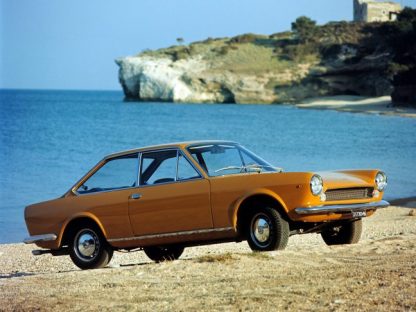 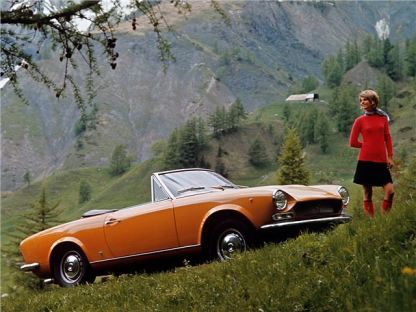 Disregarding build quality, for its time it was a fine example of conventional design. I drove it like an arse on occasions, yet it kept me and the rest of the world in one piece, teaching me a degree of circumspection at the same time. I’m very grateful to it. Had I sole access to it, and the money, I’d doubtless have modified the exhaust, to increase the willing Italian-ness of its sound, fitted wider wheels, a smaller, leather-rimmed steering wheel, a rev counter, and maybe a bucket driver’s seat, all in the cliched boy-racer style of the time. Fortunately I didn’t. 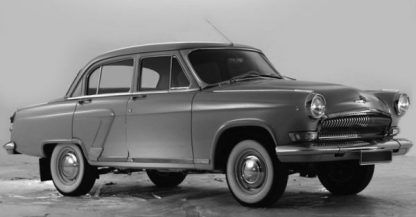 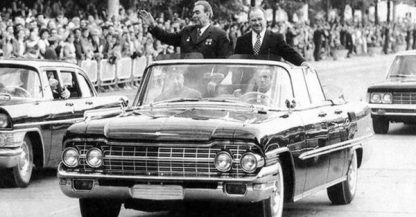 Meanwhile, the 124 was starting a parallel existence. Although still anxious to present themselves at the technological cutting edge, with the race to the Moon by no means decided, the USSR obviously wanted a conventional car. Car imports were forbidden and, between the large Volga (GAZ) for the Nomenklatura and the small rear-engined Zaporozhets (ZAZ), in a later form as once owned by Vladimir Putin (the car, not the factory), there was only the Moskvitch.

Production of that was nowhere near to satisfying a growing demand, and even a population with no choice wanted some choice. So a simple, rugged 4 door saloon fitted the bill. Fiat certainly would have borne this in mind when developing Project 124, which would have been one more reason why the front-driven 123 was sidelined. Nevertheless, the final VAZ differed significantly under the near identical skin, resulting in a car that was more rugged, durable and practical, and in particular one that would survive a Russian Winter in a way that few Western offerings could, even down to having a starting handle on early versions.

With a larger OHC engine and thicker steel, it was a better specification that the 124 I knew, though it sacrificed a fair amount of that car’s nimbleness.

Leonid Brezhnev was the Soviet leader from 1964 to 1982. A great car enthusiast, and a notoriously dangerous driver, he had a fine collection of vehicles often given to him as gifts from Western leaders.  He was an astute man, in that he survived in office for 18 years but, like many Russian leaders, he wasn’t the leader they deserved, seeing the USSR enter a period of economic stagnation.  Look at the Russian space effort and some of the bold examples of Soviet architecture and you seem to see a nation looking to the future.

Look at much of their industrial design and you don’t. Back then, I remember wondering why, unfettered by Western marketing foibles, Soviet Russia wasn’t making a forward-looking people’s car that was more like a Citroen GS than a very conventional Fiat, a car that was in the latter part of its life before VAZ production even started. Today I guess I know why.

The new VAZ factory in Tolyatti started production in 1970 and, by the end of 1973, a million VAZ-2101s had been built. The next year, with the Fiat 124 by now replaced by the 131 Mirafiori, exports to the West started, and a bunch of lazy British comics had a new butt for their lame jokes. Reviews did not conjure the willing and nimble Fiat of my memory; possibly things had moved on a few years but, also, VAZ’s engineers didn’t have boy-racers like me high up on their list of priorities when they specified their higher-riding version.

Obviously the exports were intended to bring in Western currency to the USSR, since home demand was certainly not being satisfied with waiting lists of several years. And, for quite a while, that export money did come in, provided by people looking for a simple, spacious, cheap car for basic transport.

Typical of the car’s slow evolution, yet the engineers’ aspirations, is that a small run of Wankel-engined Ladas were produced in 1980, no-one seeming to have acknowledged that the engine’s time had probably passed. Nevertheless, they found use with the police and security services and a 120hp, twin-rotor engined, unmarked KGB special is something to crave for my notional Museum of Arcane Automobiles.

Today, although Tolyatti city has its troubles, AutoVaz remains a huge enterprise, producing various models, totalling almost 1 million cars each year. The original 2101 lasted until 1982, and was followed by a series of updates retaining the original shape. The general consensus seems to be that build quality dropped appreciably over the years and the Lada Riva, as it was by then marketed in the UK, was withdrawn in 1997, having become irretrievably outdated even to its loyal client base.

But, in Russia, despite their having produced other, more advanced models over the years, the final VAZ-2107 only ceased production in 2012, having given Project 124 a 46 year run. In its time Russia had seen radical change whilst the original Lada had remained, essentially, more or less the same. Its heritage had become that of a living fossil.

25 thoughts on “The Fellow Traveller”