As we conclude our trip across South America, we do so in a small truck with a surprising powerplant. IAME’s faithful Rastrojero.

Argentina’s Peron-initiated IAME (Industrias Aeronáuticas y Mecánicas del Estado) technology and manufacturing vehicle, turned out some weird and less than wonderful machinery in its 38 year existence; from small Goliath-like front wheel drive cars with highly unconventional split-twin two stroke engines, to a sports car with a 2.5 litre air-cooled modular V8. Yet IAME’s most successful and enduring product was the Rastrojero, a light truck truly down to earth in its concept and engineering.

Resembling a scaled-down Willys Jeep pick-up, the earliest iteration of the Rastrojero had its origins in a joint venture with the Philadelphia based Empire Tractor Corporation, a short lived (1946-50) business set up to build light tractors for export only, using war surplus components bought at low cost.

Empire’s venture into the Argentinian market was blighted by acrimony, but gave IAME a supply of components for their rural vehicle project.  Thus the Rastrojero began life with a 2199cc Willys Go-Devil side valve petrol engine, a three speed Empire gearbox, and Empire axles. The separate steel chassis had transverse leaf front suspension, with a live axle and longitudinal leaf springs at the rear.

Production was modest in the first two years, with only 2365 of the petrol (Naftero) engined trucks sold. In 1954 the Rastrojero received the engine which would define its identity, the 1758cc ohv Borgward D4M diesel, along with a new 4 speed gearbox from the Bremen firm.

The D4M engine was new technology, having made its debut in the Hansa 1800 saloon a year before. Sub 2 litre diesels suitable for road vehicles were a rarity – Peugeot, Perkins and BMC’s offerings were some years away, and the only serious alternative was the Mercedes Benz OM636. The Borgward engine produced a modest 42bhp, but its frugality was impressive. Over 60mpg was achievable in the 1250kg six seater Hansa saloon, and the Rastrojero’s unladen weight was 100kg less.

The engine long outlived its parent company in Bremen, and in 1965, as the D301 gained 39cc by way of a 2mm increase in stroke, a more modern Bosch indirect injection system, and another 10bhp.

In 1969 the Rastrojero received a complete re-style, with a rather Japanese looking cab, offering four doors for the crew-cab version for the first time. The chassis gained a new torsion bar front suspension, with double wishbones.

The Borgward engine bowed out in 1971. The Argentinian Borgward Diesel firm continued to supply IAME with engines, but had set up an alliance with Peugeot to produce the widely used Indenor XD 4.88 engine. The Borgward gearbox continued to be used.

A further, rather charmless, restyle appeared in 1974, along with the Conosur, a four door saloon intended for taxi use.

The Rastrojero was never built in huge numbers. At its peak around 3000 per year were sold, with some exported to Uruguay, Chile, and Bolivia. A wide range of bodies were available – stakeside and conventional pick ups, crew cabs and panel vans, and even a few estate cars – ‘Rurals’ in Argentinian coachwork parlance.

IAME tried to capitalise on the Rastrojero’s reputation by offering other vehicles under the brand. The 1969-79 F71/SM81 was a forward control range of vans, minibuses and light trucks using the bodywork of the discontinued IASFe DKW Combi on an adapted Rastrojero chassis. The largely unrelated Rastrojero O68/M91 was a 2.2 ton forward control truck also produced from 1969-79, using the cab of the Borgward B611 light van and a 3.2 litre Peugeot diesel.

IAME fell victim to the so-called National Reorganisation Process under General Jorge Rafael Videla, resulting in the end of Rastrojero production in Córdoba on 22 May 1979.

Several attempts were made to restart production over the next decade, but they were thwarted by parts supply problems and the prevailing political and economic turmoil, with only a few hundred vehicles manufactured.

In all but the most dryly factual account of the Rastrojero’s long life, there’s a strong sense of affection for a vehicle which saw a nation through good times and bad times, and represented a sort of rural ideal, even though Rastrojeros were as likely to be found moving furniture in Buenos Aires or Córdoba as transporting livestock and feed on the estancia. 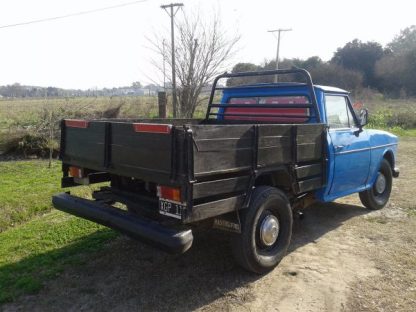 A quick check of Mercado Libre suggests that the things have the indestructibility of cockroaches, and are commanding strong money.

And finally – the true measure of a cult vehicle is a retro homage, preferably electrically powered, so here it is: