Let us briefly remind ourselves of Leslie Poles Hartley’s words, ‘The past is a foreign country: they do things differently there’.

The country photographed is now in the past, the Deutsche Demokratische Rebublik, a failed state which ceased to exist in 1990, and they really did do things differently there. When I took these photos nine years before the fall of the Berlin Wall, the DDR was dysfunctional, but very much extant, and didn’t look as if it would be brought down any time soon.

The East Berlin carscape was surprisingly diverse. As befits the Russian Sector in the Quadripartite occupied city, there were plenty of Lada’s and Moskviches to dilute the heady aroma of the domestic products’ favoured cocktail of gasoline and lubricating oil.

The large white car behind the blue Trabant is an EMW 340, a re-worked BMW 326, built in Eisenach until 1953. There’s a Dacia in the picture too, but I can’t explain the Vauxhall Viva HB. Although I don’t have photographic evidence, I was surprised by the number of Citroën GSA’s in East Berlin, only much later working out that they were probably assembled by Cimos in Slovenia. 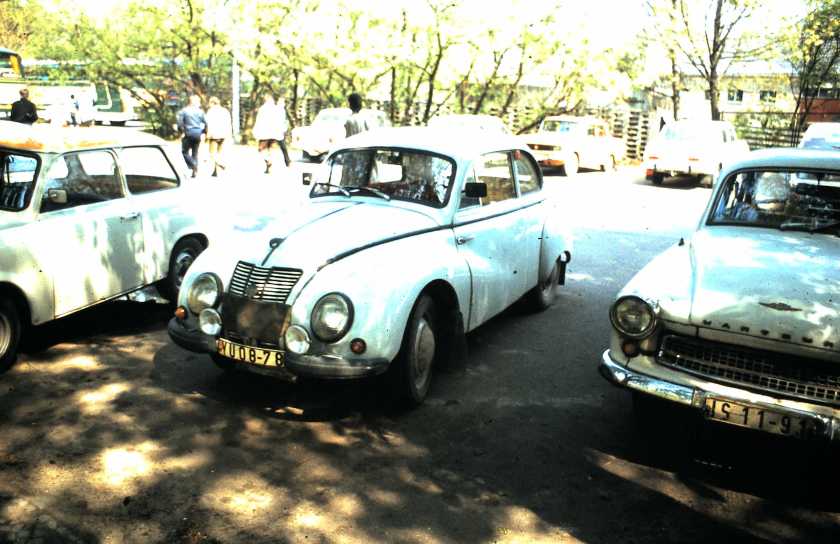 Elsewhere, a pleasing IFA F9, originally built in Zwickau, then transferred to Eisenach where it formed the basis of the Wartburg 311, an example of which is parked beside it.

Apologies for the less than sharp photographs.  At the time when I took them – I was in my early twenties – I had only a limited awareness of the work of Douglas Land-Windermere, but the ‘effect’ is mainly down to the not wholly successful transfer from badly-kept transparencies to digital images.