Fiat’s 1970’s brochures were often stark affairs. Studio shots, no background and just the facts. With an economy hatchback like a 127 or suchlike, there was a certain amount of logic in this approach, but for what many dubbed a mini-Ferrari, it risked underselling what was at the time a fairly unique proposition.

Conceived to replace the popular Fiat 850 Spider, the 1972 X1/9 was long lived. Claimed figures vary but at least 160,000 were produced over a 17-year lifespan. The story goes that faced with the likelihood of Fiat taking production of the 850 Spider’s replacement in-house, Nuccio Bertone pushed for a mid-engined concept which he felt would ensure his carrozzeria would be the beneficiaries of any planned outsourcing. As it turned out, Bertone received the contract to produce painted and trimmed X1/9 bodyshells, which were subsequently shipped to Fiat’s Lignotto facility for assembly. 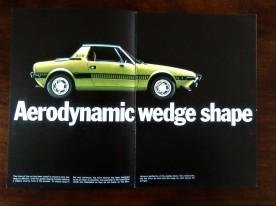 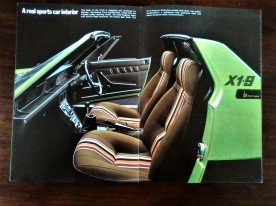 Utilising running gear derived from the much lauded 128 series, the X1/9 was an instant hit with customers and critics alike, offering exotic car thrills at saner velocities and a price mere mortals could reasonably aspire to. It was no shabby compromise either – Fiat engineers did their homework and honed perhaps the finest mainstream small car drivetrain of its era into a compact sports car that could humble far more rarefied machinery, yet was practical, reasonably spacious and could be serviced at your local Fiat garage – back in the days when you could still find one.

The X1/9 landed in RHD form around 1977 and the earliest brochure in my possession dates from around that period. I seem to recall most of the X1/9’s in this neck of the woods were what Fiat describes here as the ‘Special series’ painted metallic green, with black ‘ladder’ decals along the flanks, which frankly it didn’t need. More stripes livened up the seat facings, while alloy wheels and fog lamps came as standard. 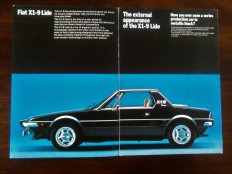 All Images: Driven to Write

The Lido special edition arrived about a year later – ostensibly a run out model before the revised series two version was launched and in this case, Fiat’s marketers laid it on a bit thick. “Have you ever seen a series production car in metallic black?” they ask. “The Lido comes in aggressive, aristocratic metallic black finish highlighted by a narrow horizontal band (or an adhesive stripe to the likes of you) and the Fiat trademark in silver. The bumpers are in high gloss chromed steel with rubber over riders, a combination to recall the ‘Roaring Twenties.’” I’m assuming the marketing team were on deadline and it was getting on for cocktail hour because that really is the purest drivel.

Saner council arrived with the second series, dubbed the ‘Five-Speed’. Powered by an enlarged version of the same Lampredi belt driven OHC four also powering upscale versions of Fiat’s Ritmo, the 1979 model year X1/9 boasted more power – up from 73 to 85 bhp, and the eponymous five-speed gearbox. Wider wheels and tyres were fitted – 165/70 SR 13 against 145-series tyres on earlier models. The later cars also featured a redesigned dashboard and interior refinements. The biggest external change came with the fitment of massive US-spec 5 mph impact bumpers which did absolutely nothing for the aesthetics or one imagines the weight distribution at either extremity. However, the little Fiat’s styling and overall balance was so good, it wore such indignities with better aplomb than many.

This later brochure is more lavish, offering a higher standard of photography and a merciful lack of marketing hyperbole, presenting the car for what it was, even if the settings appear not only a little forlorn, but also hardly the sort of place you’d immediately think of taking your X1/9– or any Fiat for that matter. Not without some trepidation at least. 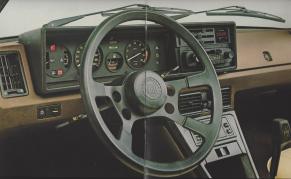 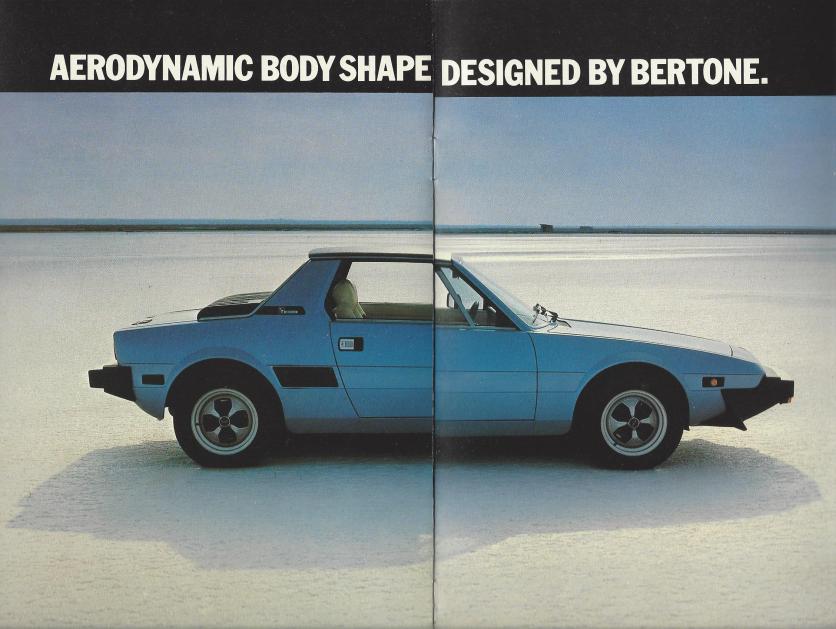 Over the X1/9’s long life, Fiat, did spend a certain amount of time, effort and money on more powerful variants, all of which somehow conspired never to see the light of day. Even quite late in its career I recall Bertone preparing a version powered by the Uno Turbo power unit, featuring a Porsche 924 style glassback, which also came to naught. Full production and overall responsibility for the car was shifted entirely to Bertone in 1984 at which point all Fiat badging was removed. The model was discontinued entirely in 1989.

The X1/9 showed the two sides of Fiat. On one hand the social leveller, democratising what had hitherto been the preserve of the elite; allowing exotic car styling and engineering to be made available to ordinary mortals such as ourselves. But one the other hand, Fiat’s inability to stabilise their business meant the car was to all intents and purposes allowed to wither and die. The X1/9 should by rights have been a bigger success than it was – for a large portion of its life there was simply nothing like it. Instead Fiat abandoned the model along with their ambitions in the US market in time for Mazda to redraw the maps and make it their own. Today Fiat’s open two-seater is made in Hiroshima, and so the world turns.

Postscript: According to Honestjohn.com there are only 1258 examples left in the UK. If the X1/9 had an MG badge on its nose there would probably be an entire cottage industry behind it now. What is it about Fiat’s that induces such apathy?