Carrying on our look at the exhibits in the Louwman Museum, we consider a rarity, a car manufactured by a city.

China’s first production car was built by the Shanghai City Power Machinery Manufacturing Company. Supposedly a copy of the 1954 ‘Ponton’ Mercedes 220, on actual viewing the Shanghai SH760 seems to have been copied through the wrong end of a telescope. Its introduction in 1958 as the Fenghuang (Phoenix) coincided with the start of the odious Mao Zedong’s Great Leap Forward and this was the car that lower ranking officials might have toured the country in whilst implementing the Chairman’s ill-informed industrial and agricultural schemes. Later on, as long as they weren’t too ‘intellectual’, these same officials might have monitored progress of the Cultural Revolution from the seats of a Shanghai. A probably conservative 40 million deaths from starvation, murder and suicide later, the SH760 was still in production.

The Louwman example was acquired brand new in 1986, has covered minimal distance and is still, as car ads once liked to state, fitted with the original transparent plastic seat covers. However I’d hesitate to say that it was in mint condition, since manufacture of the car seems to have been in line with the ideas of the great theorist Mao, that you could produce steel in your backyard. Pressings and panel gaps are inconsistent and chromework is of abysmal quality, testament to a production process that might be politely described as ‘artisan’. Looking at it almost fulfills my childhood wish that I could shrink and drive my Dinky cars – it has the appearance of a full-scale metal toy. 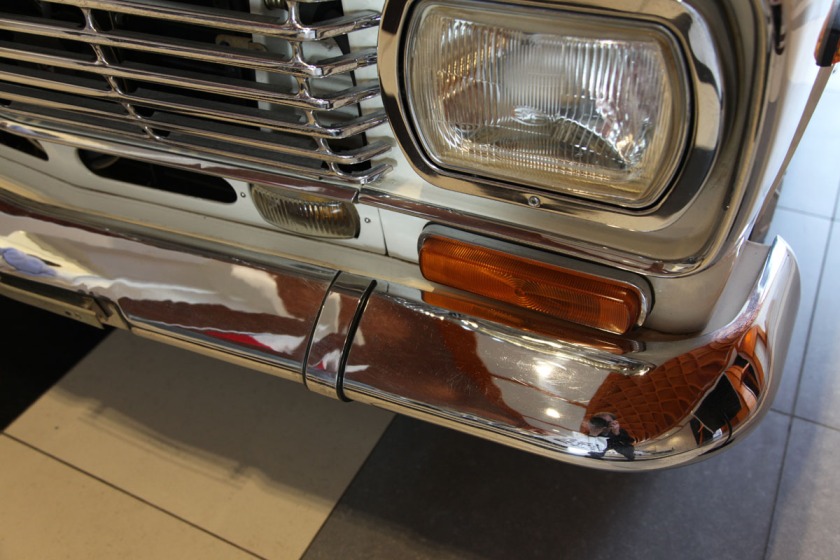 Powered by a 2.2 litre straight six also copied from the Mercedes W180, front and rear end treatment were revised through the years, but never really complemented the rounded central section. Despite disorganised and labour-intensive manufacturing methods, the SH760 had a quite impressive production of nearly 80,000 units; though possibly less impressive when you consider over a 33 year life that only averages about 2,400 a year. Actual peak production in a year was 6,000 in 1984.

Production ceased in 1991 and reflected the gradual transition of China’s economy in the later part of the 20th Century. Nine years previously, in 1982, Shanghai Automotive became the first Chinese car manufacturer to start collaborating with the West. Once again they were copying a solid German saloon, but this time officially with the VW Passat based Santana. Today, now renamed, SAIC of course owns the MG and Roewe brands, acquired from the coincidentally named Phoenix Consortium.

One may gawp in incomprehension at the SH760, but it serves to underline just how far China has come as an automotive manufacturer. Less that 10 years ago, the web forums of Car Magazine were still discussing whether anyone would buy a Korean car except on a bargain basement scrappage deal and, certainly, most would have dismissed outright the idea of China becoming a credible player. The awful Brilliance Zhonghua introduced to Europe in 2005 confirmed such prejudices by carrying on the cack-handed tradition of the SH760 and SAIC’s current products still haven’t properly established themselves in Europe. But in the latter case, it’s probably lack of dealers and unfair customer perception – the cars themselves seem perfectly acceptable. Waiting in the wings are Borgward, Lynk, Qoros and others and, in terms of knowing what should be done, Geely have shown themselves more capable than Ford in nurturing the Volvo brand to profit. So who’s having the last laugh?