The Simca 1300/1500 stepped elegantly into the Aronde’s shoes yet, despite good looks and strong sales, it never really escaped the rather ‘grey’ reputation bestowed by its casting as the universal anonymous saloon in Jacques Tati’s 1967 film “Playtime”.

The casual seeker after knowledge might too easily conclude that the mid-size Simca’s sole contribution to the advancement of the automotive art was the availability, in the estate cars only, of a Formica-faced boot floor which could double as a picnic table.

The reality is that it was a well-balanced product, both in engineering and style, for which Simca adopted ‘best’ practice, rather than joining the technological revolution which was sweeping through the car industry in the late fifties and early sixties, which saw even conservative businesses like BMC, GM, and Rootes trying to END_OF_DOCUMENT_TOKEN_TO_BE_REPLACED

It’s happening now: the Mk2 Mondeo is slipping away. 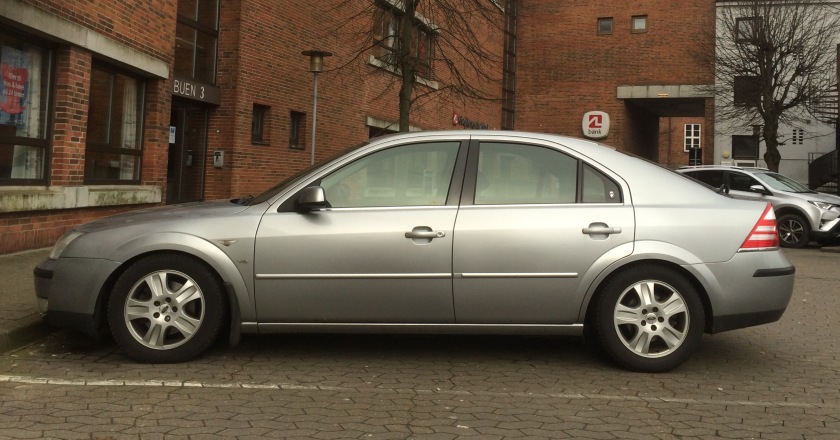 Ever since I showed a Mitsubishi Galant (last version) I have wanted a good, clear photo of a Mk2 Mondeo for comparison. They’ve been thin on the ground and most have been hatchbacks or estates. This can be interpretted as the fact they are being taken out of circulation. This banal photo shows a rarity in the making. The last ones are reaching 160,000 miles and ending their planned service life. END_OF_DOCUMENT_TOKEN_TO_BE_REPLACED