The Simca 1300/1500 stepped elegantly into the Aronde’s shoes yet, despite good looks and strong sales, it never really escaped the rather ‘grey’ reputation bestowed by its casting as the universal anonymous saloon in Jacques Tati’s 1967 film “Playtime”.

The casual seeker after knowledge might too easily conclude that the mid-size Simca’s sole contribution to the advancement of the automotive art was the availability, in the estate cars only, of a Formica-faced boot floor which could double as a picnic table.

The reality is that it was a well-balanced product, both in engineering and style, for which Simca adopted ‘best’ practice, rather than joining the technological revolution which was sweeping through the car industry in the late fifties and early sixties, which saw even conservative businesses like BMC, GM, and Rootes trying to rewrite the engineering rule-book.

The Simca 1300 arrived in May 1963, a replacement for the big-selling Aronde series, which had been its manufacturer’s prime crop through the previous decade. In the same year, Chrysler took control of Simca, buying Fiat shares to increase their holding to 65%. The 1300/1500 and 1301/1501 are therefore Fiat-era designs which lasted almost to the end of Chrysler’s period in control.

Unlike the Mille, which had been on sale for a year and a half, the 1300/1500 was not a completely “clean-sheet” design. The slightly undersquare (74×75) 1.3 litre ‘Rush’ engine was carried over from the Aronde, but the 1475cc engine, which arrived in December 1963 was sufficiently different to merit its own ‘Type 342’ designation.

The 1300/1500’s styling is characterised by a lightness and rightness of proportion which could have come from the studios of Frua or Michelotti, but is widely credited to Piedmontese aristocrat Mario Revelli de Beaumont. The style both inside and out, is more Italian-international than French, resembling a Glas or BMW more than its wilfully idiosyncratic domestic contemporaries.

The engine story began with the 1290cc pushrod ‘Rush’ engine from the 1960 Aronde. Based on a pre-WW2 Fiat ohv unit, it had gone through several upgrades. The Rush took over from the “Flash”, the main distinction being a five main bearing crankshaft. Despite its ancient origins, the engine was more advanced in its specification than rivals from Opel, Ford UK and BMC, with an alloy head and sump, and an electromagnetically controlled thermostatic cooling fan.

The chassis design was distinguished by a coil sprung live axle at the rear, with four trailing links and a Panhard rod. The front suspension was by double wishbones attached to a transverse subframe with an anti-roll bar, and spring/shock absorber units acting on the upper wishbones. The early 1300s had drum brakes and cross ply tyres, front discs arrived with the 1500, and were fitted across the range to the -01 cars. Radial tyres were not a standard fitment until the late sixties. 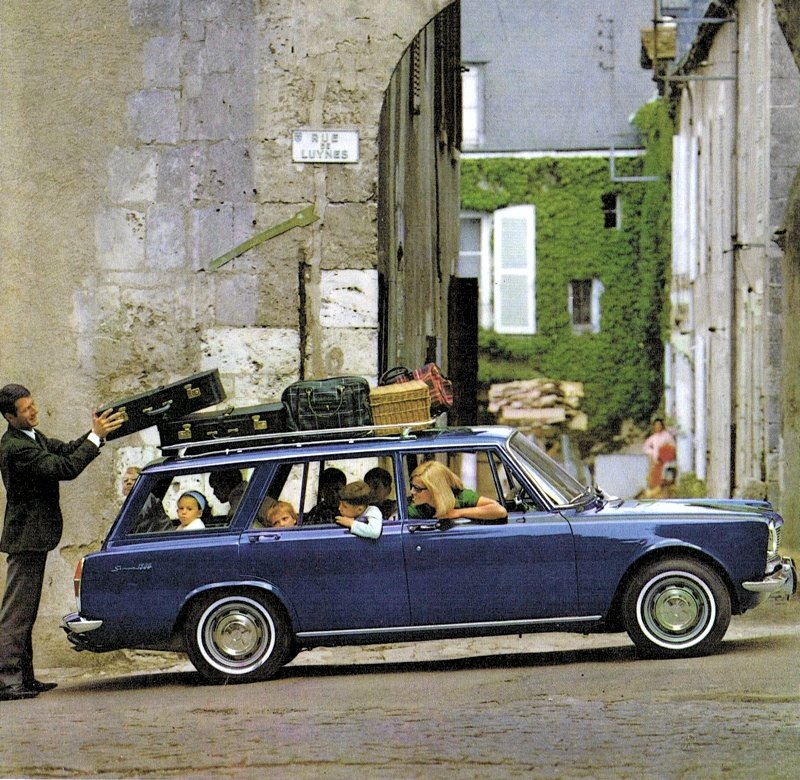 The estate car arrived in 1964, initially as a 1500. As well as the Formica picnic table, it featured a horizontally split tailgate. A seven seat Familiale version was available with a huge roof-rack to accommodate the luggage displaced by the necessarily small occupants of the rearward facing third row of seats.

The 1300/1500 had a relatively short three and a half year  production life, replaced for the 1967 model year by the 1301/1501, a nose-and-tail facelift, which extended the nose by 70mm and the boot by 135mm. The effect was to elongate the saloon to the extent that it occupied the same road space as the Peugeot 404. The wagon retained the rear bodywork of its predecessor, a missed opportunity as these rearward-facing children would have grown a bit in the preceding three years, and many customers would have appreciated a really big picnic table.

A 1300L with the shorter body was offered for a few months, as a low priced loss leader. The 712,239 production figure is impressive, but it was helped by having no domestic competitors in the 7CV / 8CV sector other than a 1290cc tax-break special version of the fine but ageing Peugeot 403. Until the Renault 16 arrived in mid-1965, there was an ‘open goal’ between the 6CV Renault 8 and the 9CV Peugeot 404. 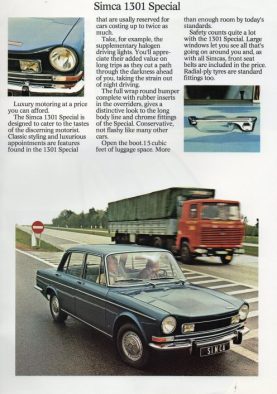 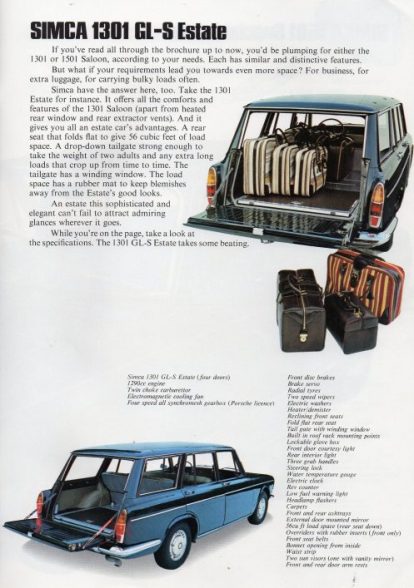 Like its British Arrow series stablemate, the 1301/1501 remained in production too long, owing to the parlous state of the parent company.  Both were replaced in July 1975 by the Simca 1307/ Chrysler Alpine, a worthy successor ingeniously contrived from the Simca 1100 component set, in the most difficult of circumstances. 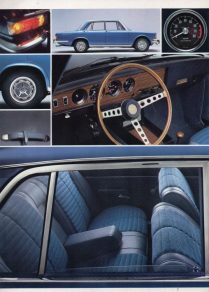 The Fiat-era relic did not give up without a fight, just making it into its teenage years. The last 1501 left the assembly line in September 1975. 1301 Wagon production ended in January 1976, and the last of the series, a 1301 saloon was built in June of that year.

The 1963-1976 “big Simcas” were once a ubiquitous part of the automotive landscape of northern Europe. In Britain they sold well, helped by the ex-Rootes dealer network and sporadic supply of domestic products from the strike-prone British Chrysler factories. Now they are all but forgotten, and near-extinct, a sorry fate for such an elegant car. Motorsport success and a high performance edition – Simca-Abarth? – might have made the series more memorable, as would a glamorous convertible or coupe.

The last nearly happened. This hatchback 1501 coupe was displayed by coachbuilder Heuliez at the 1968 Paris Motor Show.

Simca’s management were not tempted, preferring to update the Bertone designed and built Mille coupe, and build on their relationship with Matra.  Above all, the idea came too late. In the planned order of things, the 1501 would be gone in two years.

Never underestimate the stamina of a grey man…

12 thoughts on “Theme: Simca – The Discreet Charm of the Bourgeoisie”