A Suave Swansong. The 406 Coupé embodied values which had seen a Franco-Italian marriage survive and prosper for a generation. Sadly, it wasn’t to last.

At some unspecified point during the 1990’s something quite seismic took hold within Automobiles Peugeot. A profound cultural shift which saw a gradual jettisoning of not only the marque’s highly regarded engineering principles but also its reputation for dignified styling. Their long-standing association with carrozzeria Pininfarina was unravelling. PSA President, Jacques Calvet, believed to have been irked by the attention Patrick le Quément’s Billancourt studios were receiving, pressed Peugeot Style Centre chief, Gérard Welter for more visual excitement; a move which saw Welter poach rising star Murat Günak from Mercedes-Benz in 1994.

In October 1996, veteran auto journalist Peter Robinson observed, “The intricacies of the politics involved in designing Peugeots are understood by few outsiders. Not many insiders either. It’s been a minefield of intrigue led by [Jacques] Calvet, a man with a reputation for demanding innovation and creativity but when it’s decision time, of selecting conservatism.” Robinson hailed Günak’s appointment as a loosening of the straitjacket of conservatism, but like all baby and bathwater reinventions, it would ultimately come with a screaming nursery of unforeseen consequences.

Pininfarina’s loss of influence was arrived at gradually. The 405 of 1987 was the last full model programme the Italian correzzeria was given responsibility for. Mind you, if its 1996 successor was an in-house job, Welter’s styling team channelled their former mentors to a tee, because as impersonations go the 406 was note-perfect Pininfarina. By way of compensation perhaps, the 406 Coupé was offered to the Italians, who seeing their influence diminish, went the extra kilometre for their long-standing clients and produced a masterpiece.

In fact, so good was Pininfarina’s work that most commentators refused to believe anything this comely could have been expressly created for lowly Peugeot, suggesting it had been a rejected Ferrari proposal. This was latterly dismissed by Paolo Pininfarina, who told Autocar; “If you go back and look at the 504 coupé or convertible then you will see this shoulder line. There’s a lot of good Peugeot design identity in the 406. I’d consider it at the level of a Fiat Spider 124. Almost timeless.” Other suggestions have it as a rejected proposal for the 1994 Coupé Fiat which lost out over Chris Bangle’s Centro Stile theme. But does it really matter when the result is this harmonious?

It appears the Coupé was no shoe-horn into the 406 programme, with initial styling models being created in 1992 – the final mock up being finalised the following year. With a brief from Peugeot for a formal looking, durable shape, the fact that Lorenzo Ramaciotti’s styling team eschewed the Germanic sedan-based ideal and went for something more sensual is to their eternal credit. From its low nose and flush slimline headlamps to the hint of a c-pillar buttress, the Coupé was every inch the Sochaux glamour puss.

Pininfarina was not only responsible for styling, but for all aspects of its development, proving and production engineering in addition to build and assembly. Despite sharing floorpan, crash structure, some mechanical components and dashboard architecture with the 406 saloon, the coupé was also predominantly bespoke. Build and painting took place at Pininfarina’s Grugliasco plant with final assembly at their San Giorgio Canavese facility. Launched in 2.0 litre (135 bhp) or 3.0 litre (194 bhp) form at the 1996 Paris motor show, with first deliveries taking place in early ’97, the 406 Coupé proved something of a sensation, winning several design awards and the hearts of jaded auto journalists. 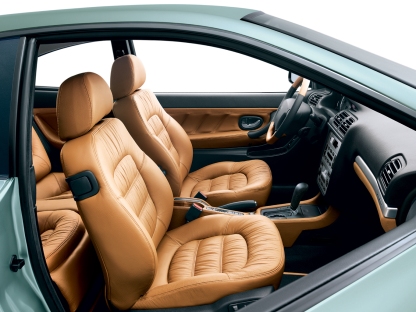 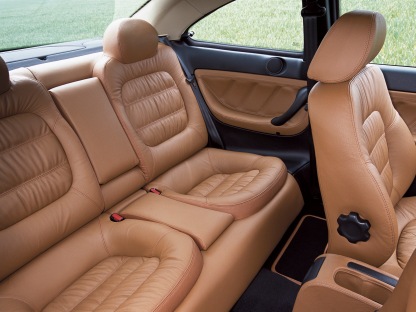 Image: Wheelsage
Inside, four bucket seats were provided by Recaro and with an identical wheelbase to that of the saloon, there was lounging space for two in the generously appointed rear compartment. Several bespoke touches highlighted the car’s status, like the manual gear lever being turned from a piece of solid aluminium. Awarding it five stars in May 1997, Autocar were unequivocal, calling the V6 version “a styling and packaging masterpiece – a future classic”, concluding their road test report by saying “the gorgeous 406 Coupé is unbeatable, and by some margin.”

Against a contemporary BMW 328i Coupé , and a Mercedes CLK 320, Car magazine gave the 406 the honours in July 1997 lauding its looks, performance, build quality, handling, steering, and ride comfort, saying; “of the three, the Peugeot gives the most reward in return for the least effort.” Making the point that the Peugeot was superior to its vaunted German rivals in most key areas, snob value excepted, Car told readers, “It rekindles older Peugeot values of beautiful cars, Pininfarina designed and solidly built before things went tinny.”

Modifications were relatively few. Around 2001, a 2.2 litre (160 bhp) petrol engine, and a 2.2 litre (136 bhp) HDi diesel engine was made available to supplement an enhanced V6 model. Apart from minor trim changes, the car continued largely unmolested until 2003 when production was wound down. According to records from Pininfarina, 107,633 Coupés were made, with some 10, 709 imported to the UK.

Pininfarina were given a final throw of the dice with a revised series two 406 saloon/estate which debuted in 1999. But at Peugeot’s design studio, the incumbent tailored style was already being replaced by a visual aesthetic that was as artistically gormless as it was disposable. Three years after the 406 was discontinued, the 407 Coupé broke cover and for those mildly traumatised by its saloon execution, sedatives would henceforth be required. By this point it was strikingly clear that Peugeot had jettisoned more than a decades-honed incremental style at the altar of the ephemeral.

It has taken the Lion a further decade to claw things back but frankly, they still have some way to go before the word beauty can preface the Peugeot nameplate once again.

Further reading on the Peugeot 406 here and here