The opposing polarities of the double chevron are unlikely ever to be satisfactorily reconciled, but was this any way to go about trying?

Many observers are content to nowadays view Citroën’s role as being that of the pre-Traction Avant era: fundamentally a purveyor of pragmatic, rather ordinary cars. The earthbound Goddess of course (temporarily) put paid to such notions and has formed the boundary line for a far more vehemently opposing camp who view Citroën’s descent from those Olympian heights as being somewhere between tragedy and outright crime. So if the car we’re gathered here to commemorate today falls into the former category, how are we to view it, twenty years later?

The Xsara was not the first, just another in a serially dispiriting line, following on from 1991’s ZX, a car critiqued on these pages as follows;  “There’s almost, but not quite, nothing Citroën about the ZX other than the badge. If you look very carefully you can find Citroen style watered down to near undetectability.” A statement which not only remains fiendishly difficult to counter with a straight face, but one which could even more justifiably be levelled at its successor.

The Xsara’s task was to build upon the success of a car which hardly set anyone’s heart aflame, but managed for a short time to outsell the VW Golf in the UK. The reasons for this anomaly were nuanced. Firstly the ZX was essentially a Golf with the merest hint of a French accent, and was similarly rational/ functional in offer. It was also tellingly cheaper to buy and in addition, gained a reputation for being a more pleasant car to drive, and a durable one in service. The ZX put Citroën squarely back into the C-segment, but while sales figures were respectable, they fell some way short of sector leaders – to say nothing of PSA stablemate, Peugeot’s 306.

The Xsara was based on a shared PSA body structure derived from the ZX and aforementioned 306. Both shared thoroughly conventional C-sector hardware: a pair of McPhersons up front and a clever independent trailing arm/torsion bar arrangement with passive rear-steer geometry astern. Engines too were standard-issue PSA four cylinder petrol and diesel units. The market demanded no more and the Jacques Calvet/Xavier Karcher recipe was to give the customer what they expected – but (chassis dynamics apart) not a whit more.

Shared uncomplicated mechanical hardware of course made pragmatic sense at this hotly contested end of the market where margins were feeler-gauge thin – the Xsara programme costing PSA a fairly modest £200m before tooling and changeover costs, allowing the model a decent stab at profitability. The result meaning that the only possible differential would lie in matters of style and positioning. 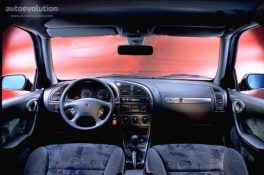 Here PSA management would turn (group) logic on its head. While Renault had embarked on an acclaimed styling reinvention under the assured leadership of Patrick le Quément, Sochaux was inexplicably floundering. How else to view the decision to ready the as yet unreleased 307 as the more radical choice, with the Xsara the more conservative offering?

Styling duties were overseen by Velizy Studio chief, Donato Coco, reporting to Design Director, Art Blakeslee. Thematically, Xsara would refer to the mid-range Xantia and to a (very) fleeting extent, its more Citroënesque XM flagship, the intention being to create something akin to a Mercedes-like vertical affinity aesthetic.

The five door version, by far the most popular model was the work of a young British graduate who Blakeslee had approached while still completing his RCA automotive design course in the UK. Giles Taylor arrived with his suitcases at Vélizy in 1992 as the Xsara programme was being initiated and his theme was chosen over proposals from Bertone, who were reportedly responsible for the interior style.

Taylor, rather unusually was singled out for his contribution, Blakeslee telling Autocar in 1997,  “Giles is one of our best young designers, and I thought he should get credit for his efforts. I’ve found that if someone’s efforts are properly recognised, he’s likely to stay with you.” A somewhat presumptuous statement given that Taylor subsequently accepted an offer from Jaguar’s Geoff Lawson, where he would ultimately become responsible for, amongst others, the interior styling of the X350-series XJ. He has subsequently become Design Director at Rolls Royce.

Xsara’s style was attractive and neatly executed in a slightly anodyne fashon, but rather obviously dialled down with the clear intention of neither eclipsing its larger sibling nor indeed its Peugeot equivalent. Critics were broadly underwhelmed, Autocar’s Steve Cropley describing it as “a mite conservative“, while lauding its visual coherence within the Citroën range. A three door version was also offered at launch, dubbed a coupé with a higher price point.

PSA’s market ambitions for the Xsara were bullish. However, later that same year, VW introduced the Mark IV Golf, a car which redefined standards of design sophistication and interior presentation for the sector. This was bad enough, but 18 months later the Xsara’s prospects were hammered flat by the advent of Ford’s sector-defining Focus – the Xsara’s vapid expediency laid mortifyingly bare.

For the 2000 model year, the Xsara was facelifted, receiving a modified corporate nose treatment along similar (gawky) lines to that of the C5. A five door estate was added, along with improvements to interior and drivetrain. In this form it limped on (heavily discounted) until 2004, when the hatchback versions were replaced by the striking Jean-Pierre Ploué-inspired C4. Production continued in China however for some further years.

With total production of over 3.3 million cars, the Xsara cannot be considered anything but a commercial success, but all this really tells us is that they sold rather a lot of them. For brand-Citroën however, it was another value engineered and conservatively styled nail in its coffin, and while its 2004 replacement offered a more engaging visage to the world, this see-sawing of Citroën’s visual language did nothing either for identity or coherence.

But given what PSA’s dim-witted management were up to at Sochaux, it’s hardly surprising Citroën was unceremoniously cast into the bargain bins. Corporate cowardice, panic or simple ineptitude? Take your pick, but the Xsara stands today as simply another commodity-Citroën, just like today’s visually blank C4. The same mistake, over and over.