Vélizy’s 1994 monospace concept, while no masterpiece, was perhaps the best of an uninspired bunch.

It’s relatively difficult to imagine now, but in the early 1990’s, the future was looking decidedly MPV-shaped. Particularly amongst European manufacturers, who were falling over themselves to get something vaguely monospace to market, following the creative and commercial success of the innovative Renault Espace.

The MPV concept appeared to particularly chime with the French motorist, who was generally characterised by preferring pragmatism over pretension. In 1991, Renault again set the pace with the Scenic concept, but three years elapsed before Art Blakeslee’s Citroën studios presented Xanae.

Star of that year’s Paris motor show, Xanae offered a vision for a new type of Citroën, aimed very much at this burgeoning sector. Sized between C and D-segments with a clear stylistic reference to the Xantia model, Xanae appeared to many observers as a distinct and distinctive hint to what customers could expect from the chevron within a comparatively short space of time – a Citroën spokesperson telling reporters, “we wanted to create something that was totally new: a cross between a saloon and a people carrier.”

Styling was the work of Dan Abramson, who was recruited in 1984, remaining at Citroën’s Vélizy studios for another twenty one years, penning a staggering amount of chevron-badged models over that period, including the C6. The narrative behind Xanae, as recounted by Blakeslee at the time, was that of an eye.

The Xanae, he said, was really a giant eye, looking out for and protecting its occupants in an increasingly hostile and dangerous driving environment. Hence the shape of the headlights, daylight openings, even the side rubbing strips. Which was a fine line in design-speak, and illustrates how little is new in the World.

With any creative endeavour, the end-result is usually predicated on the brief that initiates it. In this case, Abramson appears to have been hamstrung by an edict of, ‘make sure it vaguely resembles a Xantia’. Hemmed-in too by the leadership of a man Citroën’s Claude Santinet later damned in the following terms; “ …inside Citroën, I don’t think we had the man with the ability to lead the design team”.

In his defence, Blakeslee had not only Xavier Karcher to contend with, but a hidebound PSA board, led by ultra-conservative Jacques Calvet, so there was plenty of responsibility to go around.

There were some nice touches to the Xanae concept, but what appeared vaguely progressive then, now looks slightly timid, not merely due to the passage of time, nor indeed the watered-down production cars which were inspired by it, but because it embodied a rather thin vision from which to draw an entire generation of production cars. Certainly, it seems counter-intuitive to base a concept on styling cues of a model already two years on the market, if the idea was to prefigure the future. 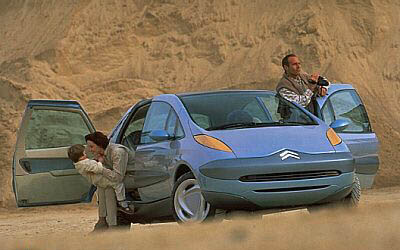 Xanae (which does suggest some kind of domestic cleaning product), was the direct inspiration for the underwhelming 1999 Xsara Picasso and the lumpen 2000 C5 models, neither of which will be remembered with much affection for their stylistic execution. Because frankly, from 1996’s woeful Saxo until the 2004 C4, there really isn’t a production Citroën design worth mentioning in anything but derogatory terms.

On balance, the Blakeslee era at Citroën was not a creative high-point. A cogent argument could be made to suggest it was in fact, its nadir. The production designs created under his leadership probably did more to banish the idea of Citroën as design leader, ceding one of the marque’s pillars to its rivals. That Patrick le Quément was overseeing concepts and production cars of superior quality and visual appeal at Billancourt should really be all the illustration required.

Ploué and his successors may have laboured to recalibrate the direction of travel in Blakeslee’s wake but Citroën’s visual identity had probably drifted too far. Today, management appear content to see the marque fragment still further; satisfied with Citroën’s USP to consist of the twin pillars of Airbumps and Fun – (Funbumps?). It’s not much of a foundation for a marque – especially one with such a rich history.

Of course it’s hardly fair to heap opprobrium on the Xanae’s shoulders – by the standards of the time, it’s quite good. Its sin, (if any) is one of omission, but frankly, a term which could usefully sum up the entire Blakeslee era.

21 thoughts on “All Seeing Eye”