Yet again we return to the  Lancia Kappa. The excuse this time is that I managed to nab some photos of the interior.

Not a very few of these still rattle around Denmark, not many either. Up the road from me a chap has a Kappa estate, would you believe. Let’s take a close look at the car…

This vehicle really ought not to be that captivating. It is dead plain, apparently. As the designer said at the time, Lancia wanted no visual noise. That means that in the eyes of some this car is rather uninteresting. That’s to miss the point much as it is to say the VW Bora (1999-2006) is boring. It seems frighteningly unadorned yet really every detail has been finessed. The Kappa is really subtle too, as is the Bora, though in its own way. There’s a Latin flavour in this car.

In that sense the Kappa repeated the formula of the Thema which also had a really low-key design. It was part of a long line of understated saloons.  That is not a very popular approach today but I rather like it so long as it is correctly done. Understatingness is a good quality for people who don’t want to show off. Peugeot used to do something similar and, to some extent, Benz did as well though the three-pointed star was a bit of a giveaway.

Back to the Kappa…

Both at the front and the back, the IDEA Institute (who designed the car) chose to constrain the lamps’ width. At the front the lamp barely eats into the wing. At the rear it is the same story. 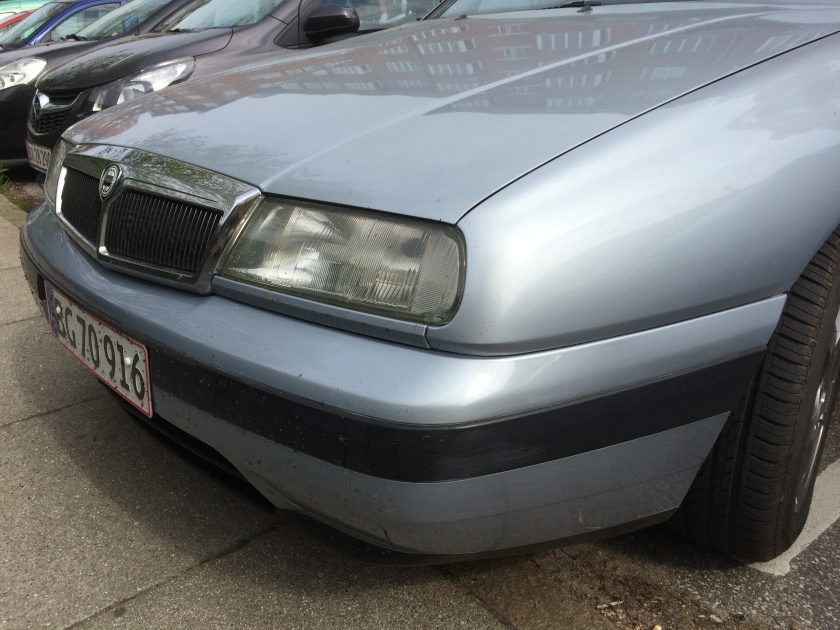 At the front I will ask you to notice the way the metal work surrounds the lamp and grille as if an aperture has been reluctantly cut for the lamps. The simplicity of the body-work allows the grille to stand prominently. More usually the headlamps might be expected to really cut into the wing to give the impression of width. They don’t do that here. There’s no need.

At the rear, like the 1989 Citroen XM, the body work frames the lamp cluster and licence plate surround, which is an arrangement analogous to the front. A small sliver of brightwork garnishes the rear. That the lamps do not extend onto the rear wings leaves the car, in side view, with very unadorned flanks. I think the designers here were knowingly attempting something tricky, a firmly conservative, clearly undecorated appearance that attracts your attention by making something of the absence. This could sound very pseud’s corner. It’s a form of minimalism if you like or reminiscent of a pause during a movement of music. 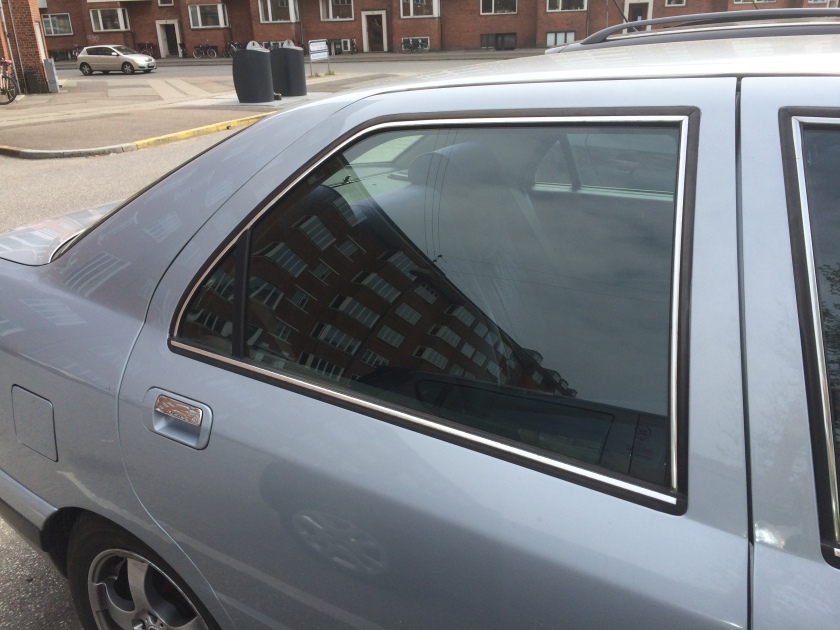 The design of the windows is, in principle, like that of the Volvo 850 or, indeed, the Mercedes 200E (W-124) – both famously unchromed. Lancia did choose to apply brightwork here and in a manner one does not see elsewhere. The brightwork is not protecting the rubber – it is embedded in it. As the image below shows, not all the joints are so nicely formed. That’s a butt joint. More succesful would have been thicker strips and neater joins at the base of the window line. 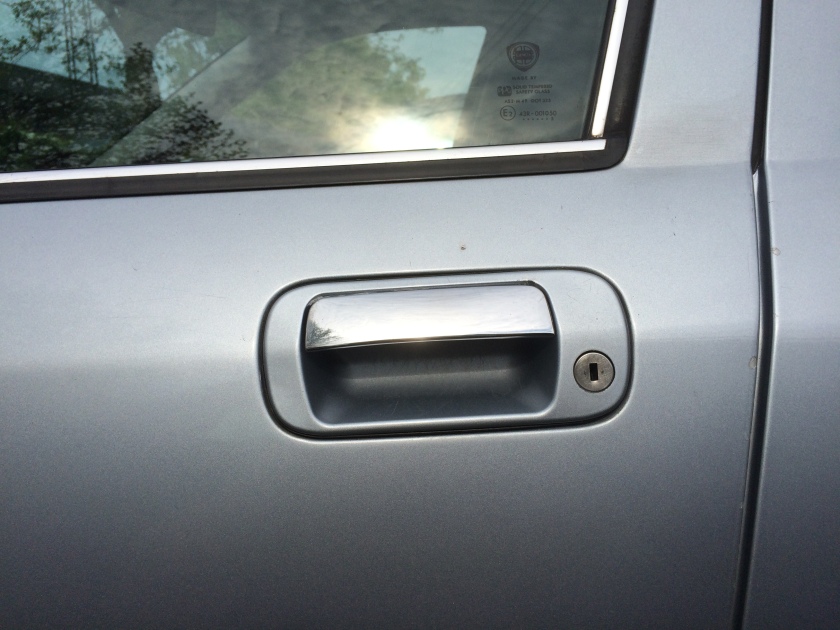 This view is rather good (below). You get a distinct sense of pointiness to the car but also strength. There is no rub-strip, just a small feature line. I can’t imagine how quickly this car would get dented in Italy. The wheels are original. 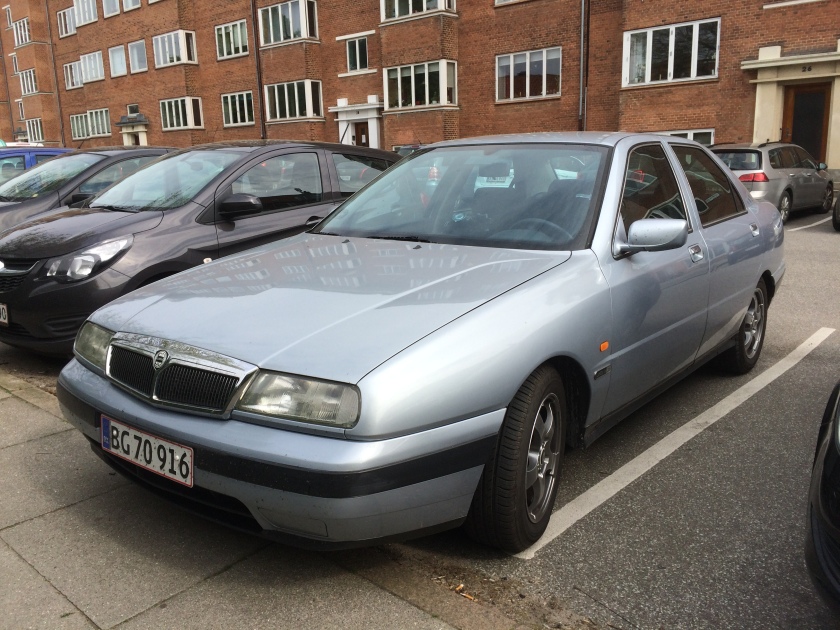 Austere good taste is my summary of this vehicle. It makes me think that perhaps Peugeot were looking for this same feeling with the 406 but didn’t quite know where to add that tiny amount of embellishment that would lift it above appearing banal (I don’t think the 406 is banal but I am sure many would not give it a second look).

It might very well be that these are not the original seats (above). I think the blue seats were matched to black hard trim.

Leaving that doubt aside, I invite you to consider that this fabric was fitted to a car in 1995 not 1985. That’s not a point against it rather a point in the car’s favour along with the 5-cylinder 2.0 engine under the bonnet. Lancia took the road less trod with this car: a calculatedly austere exterior and a plush, lush and comfortable interior mated to creditable and refined performance and decent handling. What car fulfils that brief today?

12 thoughts on “Concrete, Damsons, Obsidian: These You Shall Only Half-Recall”