In this concluding part, we delve further into the Range Rover’s dynamics.

One could be excused for expecting the Range Rover’s road behaviour to be ponderous and unresponsive, and while one never loses the sensation of driving something quite vast, the RR can cover ground with an alacrity and poise that is both satisfying and deeply impressive. Even on the narrow, meandering and frost-scarred roads of West Cork’s ‘Wild Atlantic Way’, the air suspension’s ability to flatten rugations allied with a resistance to body roll and accurate steering, allows the driver to cover ground with considerable verve, should one be so disposed.

But HMS Rangie is no corvette so one shouldn’t expect sportscar responses. The steering; a system which is required to combine road-car agility with off-road capability, suffers from an almost imperceptible off-centre vagueness. This manifests itself in a very slight delay from the initial input on the handwheel to the response from the Pirellis at road level. It’s a characteristic the driver quickly acclimatises to and soon forgets about entirely. For its size and bulk, the RR steers faithfully, albeit one is never in any real doubt about the kinematic forces at play. The turning circle however is in the cruiseliner class. 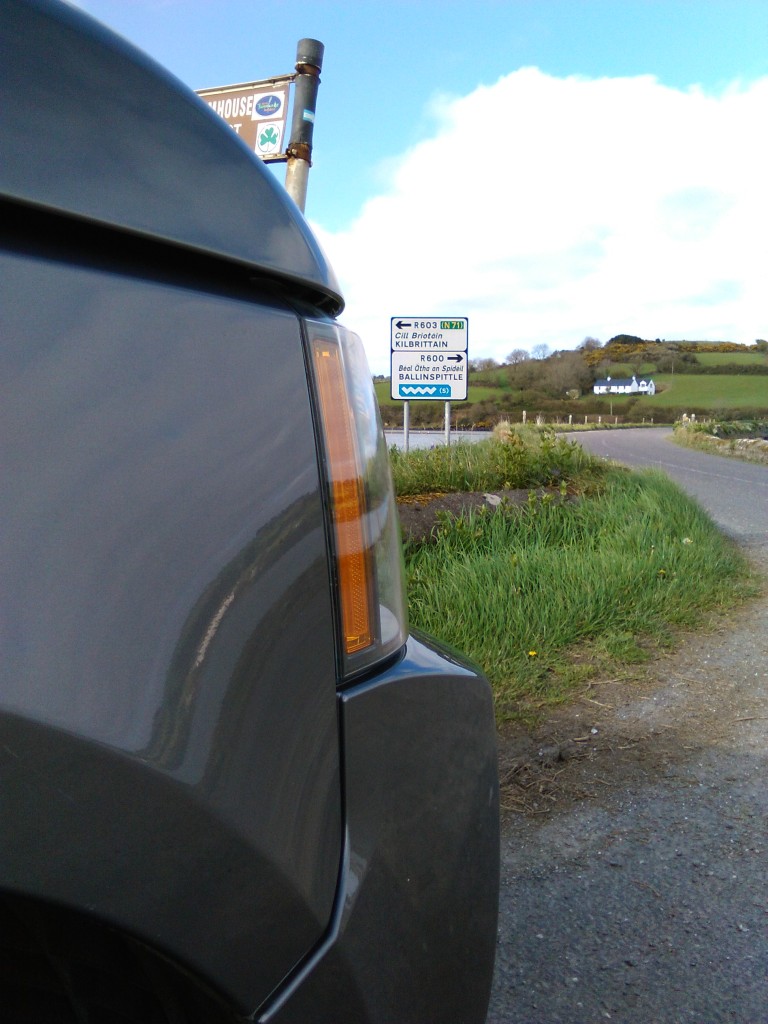 Comfort is something of a mixed bag. The Range Rover’s air suspension provides a Citroënesque magic carpet sense of isolation, particularly for those on the bridge. Aft-mounted passengers however are exposed to a surprising level of road shock owing to their proximity to the rear axle. So while rear seat comfort is good – the tall body allowing a comfortable seating position for most shapes and sizes and plentiful legroom, it isn’t as cosseting back there as one might expect. Front seat occupants however travel first class.

The luggage compartment is accessed in time-honoured fashion by a two piece tailgate. The lower section hinges outward, which is fine if you want a perch to sit on while you’re changing into your walking boots, but otherwise makes loading a bit of a chore. The boot itself isn’t massive – (in either sense of the word), being somewhat shallow, if reasonably deep, but the rear seats do fold down and as I’ve discovered, bulky loads can be accommodated. Disappointingly, both upper and lower portions of the tailgate shut with an downmarket clang – the former in particular. I’d have expected better for the money.

Of course what these figures don’t illustrate is the V8’s character; one which underpins and defines the RR’s manners and bearing. For a compression ignition unit, the AJD-V8 has characteristics that are more reminiscent of the reciprocating engines of steam era. Slow revving, with a metallic undercurrent to its languid multi-cylinder beat, its a creamy, emollient powerplant, utterly suited to the Range’s upper-class demeanour. Coming from someone with a fervent loathing of diesel, this has been quite the Damascene revelation. It’s a magnificent (and remarkably compact) powerplant which suits the car admirably.

With power of course, comes responsibility, so while Rangie Mac Rangeface can be made to lift its prow and hurl itself towards the far horizon, one can’t help feeling it’s slightly beneath its dignity. Given the banket 100KM/H speed limit on non-motorway Irish roads (that’s most of them then…), outright speed is somewhat academic anyway. And while vehicles such as these often lend themselves to pretty lamentable examples of bad road manners, I find myself conducting Rangie in a positively Victorian fashion – ‘No sir, I insist – After you…’ 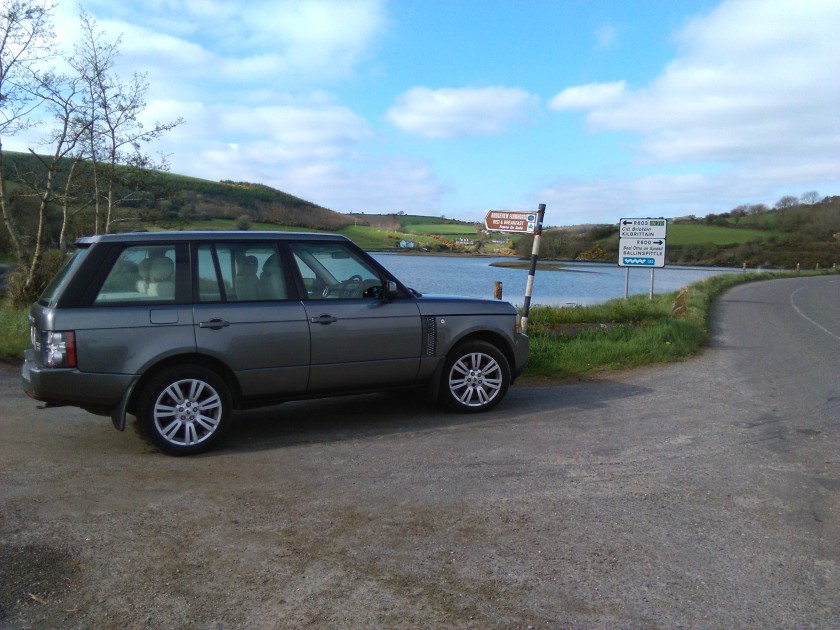 These vehicles have gained a well-documented reputation for unreliability, one which quite frankly hasn’t really manifested itself here. Over three years of ownership, the only significant failures have been the alternator – easily and relatively cheaply reconditioned, and a damaged air-conditioning water pipe – a labour intensive, but not uncomplicated fix. On a number of occasions random, panic-laden warning messages have flashed up, usually relating to the Terrain response or suspension ride-levelling, but applying the standard IT (have you tried turning it off and on again?) hard reboot quickly returned matters to normal.

A Range Rover is not nor ever shall be an austerity choice. If running costs are your concern, it’s definitely not the vehicle for you. The RR gets through a tankful of the black stuff with the sort of giddy abandon that would have seen the late Richard Harris in rehab. Apart from a voracious appetite for hydrocarbons, RMS Range gets through tyres and brake components with eye-watering regularity, which shouldn’t be too surprising given the forces acting upon them, to say nothing of the weight. 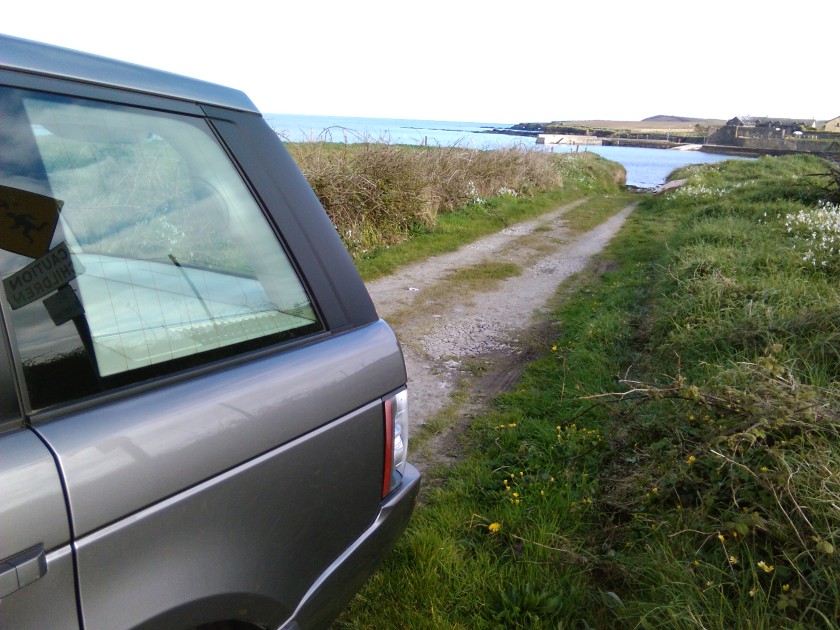 I came to the Range Rover with a healthy dose of negative bias, expecting a vast unwieldy Downton Abbey of a vehicle only to be charmed by a car which offers perhaps an unrivalled balance of abilities, combined with a sense of occasion few others can match at any price. Flaws it has aplenty, but what it also has in abundance is character – the latter as much a factor of that magnificent V8 engine. Don’t even consider one without it.

As you can now possibly gather the Rangie has me charmed. It should have been awful. Profligate, vast, overweight and overbearing, and yet it’s possessed of such an engaging, such a strong yet benign personality, that driving it isn’t simply an occasion, it’s a positive pleasure. The Range Rover is irresistible, so even if my proletarian roots still show, I can on occasion at least, assume the high life. Don’t judge me too harshly.

My thanks to MMD for the use of the RR featured here.