The Peugeot 1007 was an embarrassing commercial failure, but could the story have played out differently? Driven to Write gets the popcorn out.

In the 1998 movie of the same name, the sliding doors of the underground train were a plot device or portal – a form of magical thinking which suggested that one’s life could turn on a sixpence. On one hand: lose job, meet that nice John Hannah on the tube. Romance ensues, (as do more plot devices), get run over by car. (I haven’t seen the film, so I’m winging it here).

On the other: lose job, meet that nice Chris Martin from Coldplay. Romance ensues, get married, start a fabulously lucrative business pandering to the over-privileged and insecure.

Hindsight is a little like imaginary portals into (im)plausible realities. Brilliant in theory. We can now look back at the years running up to the 2007 financial crash and marvel. Could the car companies not see the impending train? ‘Look, it’s behind you’! Of course they couldn’t – they were too busy dreaming up niche fillers like this. The Peugeot 1007, like the Mercedes A-Class it distantly resembled was not only an answer to a question nobody was asking, it was the wrong answer in itself. Were PSA taking Sindelfingen’s crazy pills?

In theory, the ‘Mille-Sept’ could have made sense. The original Smart car  really took off in congested European cities, a fact which probably wasn’t lost on PSA’s product planners. Therefore they must have reasoned, a compact, upright citycar would appeal to urbanites and could, with the right specification, be sold at a decent premium over more conventional superminis.

Which is of course what they based it on – in this case the shared PSA floorpan and component set from the 206/Citroen C3. A range of engines was offered – two petrol and two diesel. The real novelty however lay with the bodyshell. Short in length (3.73 m) but tall and upright (1.61m); dimensions not entirely conducive to stylistic comeliness. Complicating matters further was the decision to add a pair of sliding doors. Again, one can see the rationale, allowing for easier ingress and exit in tight urban centres while providing a USP for the vehicle. Electrifying their operation would help further justify a higher price point.

At this stage, Peugeot’s planners should really have taken a deep breath and asked themselves – ‘really’? Moreover, producing an attractive vehicle out of something with the 1007’s dimensions is fiendishly difficult – (though not impossible), so I have some sympathy with Peugeot’s stylists. However, what could have been a neat looking little city car ended up having every contemporary ‘Drive Sexy’ styling cue slapped front, centre and rear, resulting in a car which came into being resembling something even Postman Pat would have shuffled uncomfortably in his shoes at before making his excuses.

The 1007 was launched in 2004 with a price of €18,000, and this coupled to those looks meant it wasn’t long before the incentives were flying. According to Max Warburton of Bernstein Research, PSA’s initial projections for the 1007 was between 150-200,000 cars per annum, but with production from Peugeot’s Poissy plant peaking at just under 54,000 cars in 2005 – (dropping alarmingly thereafter), the car’s “disastrous commercial failure,” was assured. Warburton estimated PSA lost €15,000 per car, the overall programme loss being €1.9 billion, saying, “The tooling cost for the bespoke exterior and interior of the 1007 was basically a write-off and the big hole left in the utilization of Poissy has been a drag on Peugeot since.” 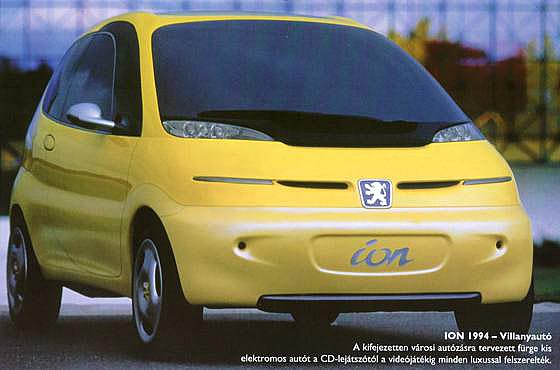 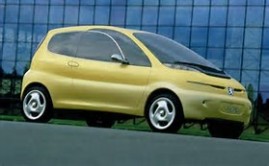 No matter how clever or suitable for its purpose a car might be, if the public rejects it, your goose is cooked. The 1007 may have been too expensive, but they might have got away with it had it looked even moderately attractive. Ironically, Peugeot seemed to have the solution in their back pocket. A decade previously, Poissy’s stylists came up the Ion concept – a compact electric city car. Looking at it now one can observe that the surfacing was a little softer than noughties’ norms, and in typical concept car fashion, there are lots of styling features that would have to be lost, (not least the headlamp positioning) but taken overall, very little of significance had dated in the intervening ten years.

It would be interesting to learn how many styling proposals were rejected before the eventual design was chosen, not to mention the political machinations that saw it go forward for production. Perhaps PSA’s management saw the press coverage Renault was getting from the Avantime and thought; ‘Why should they have all the fun? Let’s get our own over-ambitious, ruinously loss-making white elephant’. It would be equally fascinating to learn whether those who sanctioned the ‘Mille-Sept’ retained their positions in the aftermath of its denouement.

It’s probably overly simplistic to suggest that had the 1007 looked something more akin to the Ion concept, it might have succeeded, because realistically, the 1007 in any form was fatally flawed from the off. The business case simply didn’t stack up. In the movies, the suspension of disbelief is a prerequisite – especially when it comes to romantic comedies. In the motor business however, magical thinking leads one way – to the (sliding) door marked failure.