Driven to Write’s accidental tourist discovers an unusual way to amuse himself on holiday.

Following a recent sojourn back in Ireland, your correspondent has pitched up in the Costa del Sol for a well-merited change of scenery – and climate. But given that I appear to have forgotten how to behave on holiday, how is a Driven to Writer to spend his downtime, other than to observe and report upon his adopted surroundings?

What can I say about this neck of Spain’s Southern coast? Well, it’s definitely not Cork for one thing, a matter of some significance, not only depending on one’s emotional proximity to Shandon’s bells, but also given the recent landfall of tropical storm Ophelia. Notwithstanding the more unusual meteorological phenomena however, with ambient temperatures here nudging forty degrees in mid-summer, comparisons between both places become somewhat arbitrary.

Around these parts, sensible folk avoid or at least act to minimise the sun’s glare when the mercury is high. Hence the local preference for white cars – prior to the prevalence of standard-fit air conditioning at least. Nevertheless, despite the now almost universal availability of chilled air, white cars continue to predominate, so much so that losing one’s vehicle in car parks must not be that uncommon an occurrence.

But other colours too get an occasional look in. Scanning the streetscapes one observes amidst the whites, blacks, grey-to-silvers, the occasional red or blue. The Spanish have an effusive culture and in this environment one would imagine that more overt forms of expression would be encouraged, and yet rectitude appears to prevail. Why so reserved?

Darker shades are the preserve of more upmarket cars 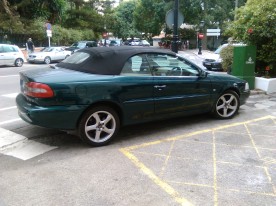 Yet here and there, amidst the more predictable automotive colour choices, one discovers the occasional rebel, the man or woman prepared to step outside social norms, choosing instead to drive a verdant statement green car. It took some time and no small amount of study to establish this as a phenomenon, but once the realisation took hold it quickly became something of a game. I call it Green Car Bingo.

All green cars are eligible, but only really vibrant greens are ascribed maximum points. I began quite rigidly, but as I became more absorbed in my quest, I began to allow aquamarines and turquoises, although these do not score highly. Perhaps the greenest car I discovered on my travels occurred the other night. A luminously verde Peugeot 107 may well have produced a full house had my flash worked. Now, it’s simply my word against yours and frankly, who’s going to believe a man who went on holiday by accident?

So every day, when I really ought to be strolling the Paseo Maritimo, reading on the beach, sampling the local sherries, or otherwise doing whatever people on holiday are supposed to do, I am in fact wandering the streets in search of the perfect green car. I’ve clearly lost the run of myself.