The two cars show how differently the same basic concept can be executed (Bristol and Ferrari are another two): the GT. The West Bromwich bolide benefitted from Touring’s neatly considered styling while Brown’s Lane’s leaper resulted from a tortuous process involving a number of hands (almost a Burkean contract between designers dead, designers living and designers yet to be). While the Jensen attained a homogenous look, the Jaguar resembles three very different ideas uneasily blended together.

What if we look inside the cars? The Jaguar and Jensen both have comically poor packaging underneath the leather and wood. Both 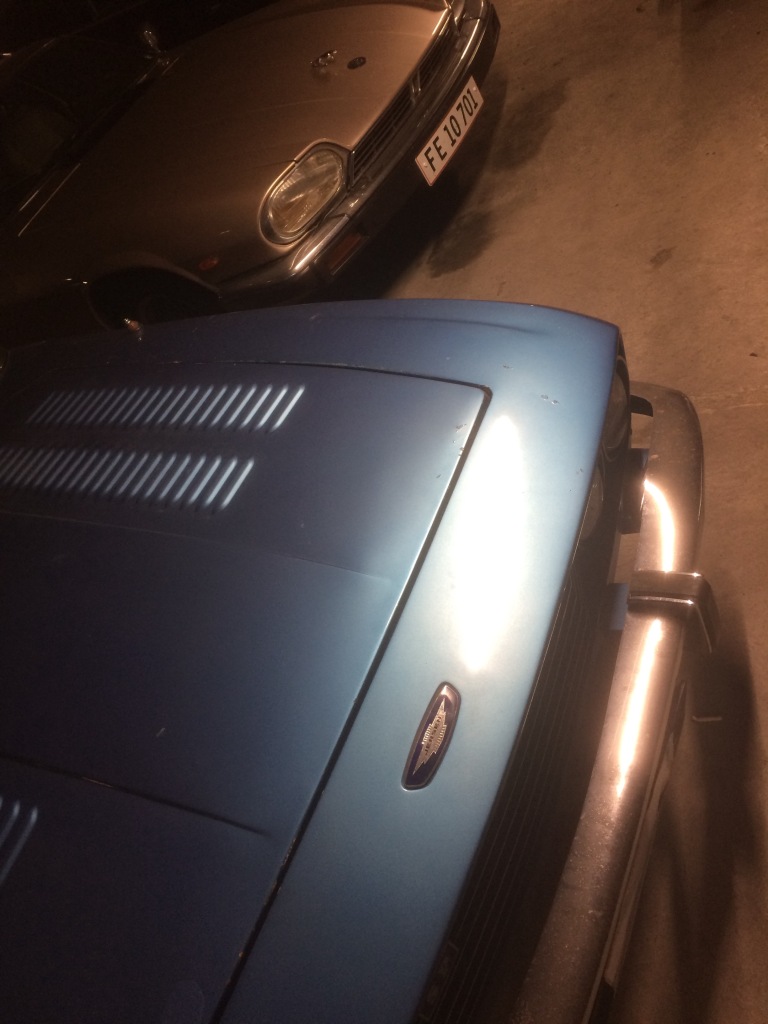 cars offer a lot to those in the front (the Jensen has width). Behind the drivers’ seats we find almost no legroom at all which makes one ask what point a 2+2 GT has? Neither saloon nor roadster, the 2+2 is like 10 m of rope when you need 12 m; it’s one half of a pair of scissors or bacon and eggs with no toast and tea.

Notice the subtle forward lean of the Jensen’s wheel arch and the echo in the vent aft of the cut-out.

To business: can we imagine fixing these designs? Of the two, the Jensen could be adjusted with the least trouble. The long, long bonnet could easily lose 25 cm without anyone noticing and another 5 cm could be added between the wheels without affecting the overall length. No height would be required as the car’s roof and its windshield already resemble a saloon’s. The modified version (below) has a longer side glass and shorter bonnet. That said, I could have lowered the glasshouse by 1% or 2% to compensate. In reality one would not notice the difference.

The Jaguar lies furthest away from a reasonable two-door coupe package. The low glasshouse can be considered a key element of the car’s style and can’t be raised. However, the XJ-S also possesses an absurdly long bonnet so the scuttle could have been brought forward and also another few centimetres of wheel base added – the resultant shape would still be recognisably XJ-S and not merely an XJ coupe.

I seldom see the Jaguar from this view; the original car shows the disconcerting blend of elements: no wonder the 1991 version dealt with the negative curve on the C-pillar, eliminating also the pointy corners by using gentle radii. Purists, no doubt, hate it. I am not among them.

Here is the original and a version with only the C-pillar modified:

The rather hastily altered images don’t do justice to the engineering changes needed to move lumps of hardware, nor the business of re-modelling the exterior transitions. However, they do show in principle that, like the Tagora, the measurable difference between not very good and acceptable is usually small. Did Jensen and Jaguar really face immovable mountains when considering the packaging? Would either car have been in other ways worse with another 30cm behind the front seats?

And finally, the two revised cars, for comparison – would you know they were modified if you weren’t told?

I felt it might be illuminating to canvass the opinion of fellow DTW author and specialist on the XJ-S, Eóin Doyle, who had this to say:- “Regarding packaging, the XJ-S was proposed as a more upmarket replacement for the 2+2 E-Type. Jaguar’s importers believed that US customers only wanted ‘occasional’ rear seats.

1975 also saw Jaguar introduce the 2-door XJ-C, which did offer four seats, so a similarly packaged XJ-S would have made little commercial sense. XJ-S was based on the same 108″ XJ-C floorpan, but with the seatpan and rear subframe pulled forward 6 inches.

The c-pillar vent area does serve to highlight the fact that nobody managed to solve the issue of how to successfully treat this, either in 1970-72 or fifteen years later when it was remodelled. Perhaps the original Sayer treatment, which made no attempt to mask the width of the C-pillar was the least compromised, even if it was the most uncompromising.

An external coachbuilder did once make a longer wheelbase XJ-S (as indeed I think Jaguar did themselves at one point). Proportionally, it didn’t work and although subtle, the alterations here also very slightly interfere with the car’s stance to my eyes.

A final point regarding the Interceptor, a car incidentally Jaguar benchmarked for the XJ-S programme. The primary reason for the Jensen’s elongated scuttle / axle ratio, was the fact that it was designed to accommodate a front mounted differential for the four-wheel-drive FF version.”

Driven to Write will return again to the XJ-S very shortly.

24 thoughts on “A Photo for Sunday: Jensen and Jaguar”