Not content with reimagining the Jaguar XJ-S’ proportions, today we examine its influences – such as they were.

The XJ-S is a car which tends to crop up with some frequency on Driven to Write. Why this is so is perhaps debatable, (okay, it’s often my fault) but I suspect that its fascination is not only a function of its controversial shape, but also stems from a belief that its styling came about without precedent. But no car is developed entirely in a vacuum, or is it?

We have covered the XJ-S’ stylistic development in some detail already, so I’d rather not retrace old ground, but what I haven’t addressed is the matter of what external designs could conceivably have been pinned to Malcolm Sayer’s moodboard, should Jaguar’s aerodynamicist and self-confessed non-stylist been in possession of such a thing in 1968-70.

Firstly, it’s worth reminding ourselves that XJ-S (or to call it by its experimental code, XJ27) was to have a low penetrating nose for aerodynamic reasons. The very earliest Sayer drawings (seen below) illustrate this, as indeed do photos of a quarter scale model of the XJ27 bodystyle used for preliminary wind tunnel tests. It’s believed that the threat of proposed US lighting regulations prompted Jaguar to abandon this arrangement.

The adopted headlamp treatment was not uncommon during the latter Sixties, influenced perhaps by earlier designs emanating from Detroit and most notably by Pininfarina’s 1961 Cadillac-based ‘Jacqueline’ study, in which the headlamps and grille became a single unified whole – a treatment reprised on Peugeot’s 204 of 1966. Headlamp / grille treatments for the 1962 Jensen C/V8, Bertone’s 1964 Gordon Keeble (by Giugiaro) and Touring’s Lamborghini 350 GT could also be said to have lent influence, but it’s Pininfarina’s Ferrari 330 GT 2+2 of the same year which perhaps comes closest in spirit to that of the definitive Jaguar arrangement.

However, before we get too carried away, we should also look to the nascent XJ4 project at Browns Lane, a series of styling studies overseen by Sir William Lyons in conjunction with Fred Gardiner from around 1961-64 when the definitive style was established. This car, which ultimately became the 1968 XJ6, began life as a four-seater personal luxury coupe with E-Type connotations.

Several of these proposals contain frontal elements which appear to reflect  Italian carrozzeria practice at the time. So was Lyons merely referencing what he saw around him, or was it simply a case of creative coincidence? Possibly both, but either way, once XJ27 diverged from Sayer’s original intentions, the adopted nose treatment made a clear reference back to those early XJ4 frontal styles.

Looking at Sayer’s original styling sketches above, it’s clear that XJ27’s eventual style was already there or thereabouts in the lineal wing line, the pinched bodyside crease running the length of the car, the cut-off tail and truncated canopy. However two designs from this period exhibit some similarities, the 1963 Pininfarina Lausanne and the 1967 Mazda Cosmo, combining (somewhat) uncluttered surfaces, similar canopy treatments and elongated tails. 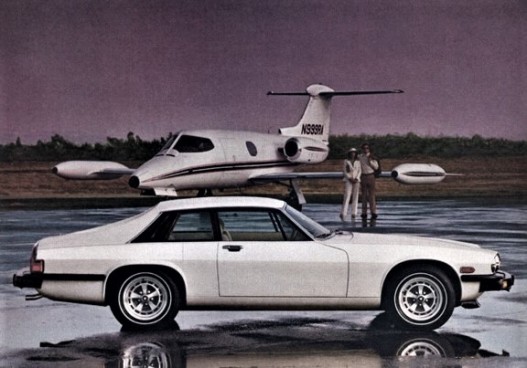 However, what muddies the water further is the fact that Sayer had to some extent been working towards this style with the car which preceded it. The stillborn XJ21 programme was a 1967 / 8 reskin of the E-Type which fell prey to regulatory complications, a lack of funding and of impetus. It does however embody the XJ-S’ stylistic missing link.

It is here of course that XJ27 really went off-piste. Eschewing the classic Lyons style or indeed the previous soft-surfaced Sayer treatment, the result was again dictated by aerodynamic concerns. The first exponent of the fin-shaped buttresses (or sail panels) remains debatable, but Pininfarina certainly were amongst the earliest adopters. A one-off 1954 Ferrari 375 MM for film director Roberto Rossellini is perhaps the earliest example of the buttress feature, one which would become something of a carrozzeria trademark. We should also look to the rear three quarter treatment of Ercole Spada’s 1963 Lancia Flavia Zagato, where the merest suggestion of the Jaguar’s sail panels can be seen. Also worth noting are the Lancia’s tail-lamp and bootlid treatments.

Now it’s worth restating that while Lyons was something of a creative magpie, Malcolm Sayer marched to a drumbeat very much his own.  Therefore, it’s debatable how much account he might have taken of external stylistic influences. The answer to that question is likely to have been some, but not in any way that would dilute the purity of his calculations.

So if no car design is created entirely in a vacuum, is it possible the XJ-S was? Certainly from the researches I have made, I can discover little to back up the assertion that headlamp treatment apart, the XJ-S was overtly influenced by any pre-existing car design, but with almost nobody left who could confirm our educated guesses, are we left to conclude that XJ-S remains the exception that proves the rule?