Bentley’s Bentayga SUV turned out to be an instant smash sales success. Yet the car that was intended to preview it was not only met with fright – it also cost its chief designer his job.

Dirk van Braeckel’s career at Volkswagen had been one of sustained corporate ladder climbing. Having joined VAG’s Audi branch in 1984, he rose through the ranks at Ingolstadt, before being chosen to help re-launch the much-maligned Škoda brand. He did as he was asked with some aplomb, leading to a generation of Škodas that were not just competently styled, but, more importantly, conveyed a sense of thorough quality.

With hindsight, this first generation of VAG-engineered Octavia, Fabia and Superb models must be considered as conservative, competent, long-lasting pieces of design which stood the test of time without anyone really noticing.

The quality of work van Braeckel and his team at Mlada Boleslav created didn’t go unnoticed by the powers that be at Wolfsburg, who consequently handed the Belgian the gig of a lifetime. This time, it was no less covetable a brand than Bentley that was in need of reinvention. Again, van Braeckel did as he was told, delivering well-considered facelifts of the existing Arnage saloon first, before facing the daunting task of re-establishing Bentley with what eventually became the Continental GT.

An enormous sales success that catapulted Bentley into an altogether different league (for better or worse), the Continental GT was seen as an unmitigated triumph by corporate circles, as well as many (though not all)enthusiasts of the marque. The Arnage’s successor, called Mulsanne, however suffered from an unbecoming front aspect, not to mention being overshadowed by the eminent boldness of its only proper competitor, the Rolls-Royce Phantom VII. Regardless of this minor slip-up, van Braeckel was still considered a safe pair of hands.

At which point he was tasked with mastering yet another challenge: marrying the stature, gravitas and quality that embody Bentley with the demands of a modern Sports Utility Vehicle. This was the task that would prove to be the merited chief designer’s undoing.

The resultant Bentley EXP 9 F concept car was met with vile disgust by the press upon its unveiling at the 2012 Geneva Motor Show. Like the Aston Martin Lagonda SUV three years previously, the EXP 9 F was viewed as a caricature, an abominable attempt at pushing and squeezing the form language of a respected brand until it just about fitted the SUV mould.

Once the vitriol had truly sunk in, Volkswagen Group’s chief designer, Walter de’ Silva came to the conclusion that it wasn’t so much the task itself that was to blame, but the man who was charged with executing it. Starting in January 2013, van Braeckel’s new job title was that of Audi’s Design Manager Motorsports & Special Vehicles Projects.

In his place, VAG stalwart designer, Luc Donckerwolke was put in charge of somehow saving EXP 9 F. The result of his efforts, of course, came to market as the Bentley Bentayga. Which has since proven to be Bentley’s most successful model launch since the Continental GT, casting aside any memories of Crewe’s brush with opprobrium a few years earlier.

So common wisdom holds the Bentayga is a resounding success, whereas EXP 9 F is an almost forgotten laughing stock. Which means it’s about time we compared the two cars.

Neither car, it must be said, has a good stance or a truly homogenous appearance. Unlike the Range Rover and Mercedes G-Models, neither Bentley can pretend their proportions are really suited to the form language of the brand. A Continental GT, what with its short bonnet and long front overhang, looks like a thoroughbred by comparison.

But is the EXP (you must excuse the omission of the 9 F henceforth) really that much worse than the ‘tayga? The EXP’s main failings are its crassly oversized wheels, the resultant tiptoe stance and the vulgar chrome brightwork framing its side windows. The small mesh slivers next to the Bentley grille are also slightly clumsy, but the more upright, regal appearance of the EXP’s front end is surprisingly coherent, once one decides to look beyond the other aesthetic shortcomings.

Both the Bentayga and the EXP share an extremely pronounced rear haunch that doesn’t gel well with the rest of the bodywork and features a clumsily placed door handle. Surprisingly, it’s the SUV Bentley likes to forget about that’s slightly more refined in this area. The same could also be said about the rear, which is more formal and graphically coherent on the EXP – if only the rear window wasn’t at such a fast angle.

This results in an awkward, almost triangular eightlight that’s utterly at odds with other efforts intended to lend the EXP a stately appearance. This flaw is all the more regrettable, as the EXP’s two-part boot lid with integrated rear lights is a good deal more appealing than the Bentayga’s utterly generic derrière (despite the comically incorporated B’s in the lamps’ graphics). 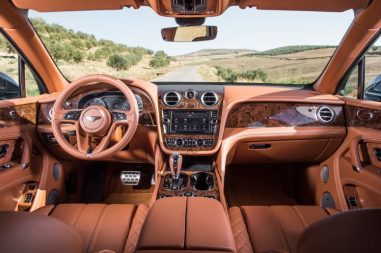 The biggest surprise awaits inside both SUVs’ interiors though. For here the EXP is the undeniably more convincing piece of design. In addition to all the expected wood and leather, van Braeckel’s SUV features a much cleaner layout than Donckerwolke’s effort. Where the Bentayga wholeheartedly mimics the Continental’s ‘wing’ motif design, the EXP aims for a more classical dashboard, albeit supplemented by a monitor that’s on top of a ‘floating’ centre console that arises from the transmission tunnel, flanked by a handrail on either side.

Where Bentayga goes for a generic (VAG) Bentley style, EXP tried to be both more traditional (plane dashboard) and more advanced (‘floating’ centre console), while paying tribute to this particular Bentley’s supposed off-road traits. The EXP can therefore be considered the more convincing automobile, as far as the cabin design is concerned.

But Walter de’ Silva, Luc Donckerwolke et al can’t all be wrong, can they? The EXP is undoubtedly a clumsy thing, but Bentayga’s biggest benefactor hasn’t been its supposed stylistic superiority, but time. For in the intervening years since the EXP’s contentious unveiling, we’ve become used to clumsily SUV-ified shapes.

Anyone who claims that a Maserati Levante or Mercedes GLE Coupé are automobiles that appear to be comfortable in their own sheet metal must be under the spell of marketing poetry. Yet oversized wheels, awkward metal-to-glass ratios and clumsy silhouettes are now with us on such a scale that they constitute a new norm. Down, if you will, is the new up.

What Donckerwolke and his team have done differently to van Braeckel is that they’ve played their SUV’s design extremely safe. The Bentayga is nothing other than a Continental that’s been stretched and pushed to fit an Audi Q7’s basic structure. So even though the fast front end and DLO shape may be at odds with any supposed utilitarian character, they are applied nonetheless. For this reason, no other Bentley has ever felt as badge-engineered as Bentayga.

Yet above all other concerns, what’s most frustrating is that Bentayga is so utterly uncreative. One could even be led to assume that Luc Donckerwolke clandestinely harbours similar feelings, for he decided to leave Crewe soon after the SUV’s unveiling. If he truly is as creatively driven a person as a designer of his status ought to be, this move would be completely understandable.

Dirk van Braeckel’s EXP 9 F won’t ever be considered one of the great missed opportunities in automotive history. But some of the basic ideas, such as to use some of the more stately cues of traditional Bentleys over the Continental GT’s form language, are worthy of a second assessment, even though many aspects of their execution left rather a lot to be desired.

Looking at the Bentayga now, one wonders what all the fuss was about. It’s not much better and no worse to look at than its ridiculed predecessor. So why go to the hire-and-fire trouble?

At the end of the day, neither SUV did their respective creators many favours. And why would they? Designing a city car-sized Range Rover or a Jeep supercar doesn’t sound like oodles of joy, either. Some cars just aren’t meant to be.

And some assignments are just an awful lot more difficult than others.