“Another new Alfa Romeo!” – Renowned motoring correspondent, Archie Vicar, takes a cursory look at the 1980 Giulietta 1.8 in what appears to be a verbatim transcript of period review.

Original photos by Douglas Land-Winbermere (sic). Due to damage in storage, stock photos replace the actual ones (which were damaged in storage). The article first appeared in the Canterbury Weekly Post June 2, 1980.

The performance race continues unabated in these increasingly competitive times. Alfa Romeo have decided to add a 1.8 litre engine to their range of roomy family saloons. As if good looks and capable road-holding were insufficient, the famous Milanese firm has taken the decision to give the venerable Giulietta range a further boost by endowing the car with a 122 bhp engine which allows it to top 60 mph in a little over 10 seconds, putting it well ahead of the Fiat Mirafiori Sport (10.7 seconds) and Audi’s perennial petrol-hungry, boxy, front-drive laggard, the 100 GL 5s (10.7 seconds).

Each of the three play second fiddle to the Giulietta in some marked and incontrovertible way. The Ford burns more petrol and needs half a litre more engine capacity to do it. The BMW has two doors and costs a slithery shoe more. The Dolomite relies on ancient underpinnings and has vinyl covered C-pillars.

Those are the on-paper details but the age-old question needs to be answered: what is the Giulietta like to drive? The Giulietta can be described as a development of the 1972 Alfetta which car added better ride quality and better balance to Alfa Romeo’s sporting pedigree. The Giulietta enjoys a similar layout to the Alfetta: the engine unit delivers power to the rear wheels and has a de Dion back-axle and rear-mounted gearbox too. This provides creditable balance at the cost of a slightly tricky gear-change.

The car weighs 2,520 lbs so the 12% extra power does not go un-noticed! On the test route from Zeebrugge to Seville the Giulietta always felt able to handle whatever the road presented with confidence and élan. The nought-to-sixty sprint requires a firm palm and a heavy foot though due to the inertia of the prop shaft spinning as per the engine’s rotation. Fortunately the syncro can handle the loads as frequent gearchanges in the Pyrenees proved without a doubt.

Notice how the engine continues to pull right up the top-speed which accords with the car’s sporting pedigree. Lesser cars might be designed to have a lower engine speed near top but the typical Alfa driver demands much more than the Cortina man, for example. The Alfa uses thicker engine oil than is perhaps the norm and this means, as for example on the cold morning we started off in Dijon, that one must wait a while for the oil to warm up – fling open the windows and enjoy a pipeful, I say.

Thanks to the power delivery, one can makes smooth changes pleasantly slowly and appreciate the delicate movement of the lever. In short, it’s a car to keep on the boil and one that feels quick even if there exist other saloons that, on paper, are indeed more accelerative.

Living with the Giulietta

Alfa Romeo have placed the ashtray very well: just behind the gear-lever and it has an easy-to-operate lid capable of dealing with an eight-hour smoking day. The car has plenty of room in the rear compartment too, something one can’t say about the BMW 320. One will find lots of nooks in which to lose one’s passport and driving licence as there seem to be a good number of stowage compartments such as the non-locking glovebox and open trays on the centre console.

The parcel shelf seemed big enough for Land-Windermere to sleep on (he is very thin) but he chose to slumber on the soft rear seats for much of the four days’ test. “Very good,” he declared when awaking to take a peculiar photo of a lamp-post in Innsbruck.

The boot can hold a good amount of luggage and indeed wine. The low-geared window winders are a safety feature to be commended. One can’t easily trap fingers when closing the sideglasses as they are very slow mechanisms indeed. There isn’t an ammeter but one does find map-pockets (for cigarettes) behind the front seats. 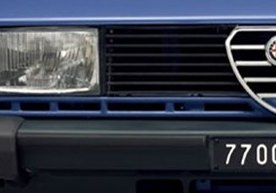 The Giulietta provides a ride-comfort revelation compared to the stiff and, some say, brittle suspensions of yore. The new cars still bump a bit around town, as we discovered in Sorrento, but get out of town, I say. These cars aren’t meant for shopping trips. As a family saloon, the Giulietta claims a fine medium and high-speed ride quality.

A rack (and pinion) system belies the speed and accuracy of the steering but we got to where we wanted to go so it can’t be all bad. Light steering though and that’s what matters most. The self-centering character seems almost to have been borrowed from Citroen. Mercedes, take note!

Rather surprisingly, the Giulietta understeers far more readily than I had expected meaning that one can easily misjudge a corner after a fine lunch (the Hotel Murillo in Seville is worth a second look and the stay there was therapeutic).

Still, with a good number of miles under the wheel in this test already achieved, it is safe to say that the Giulietta is broadly a fine saloon of considerable visual merit (hints of Oldsmobile?) and, furthermore shows clearly the direction and pace of Alfa Romeo’s resurgence after a difficult few years. Lancia may be looking nervously over their shoulders, I might suspect.

The Giulietta has class-competitive performance and fine high-speed ride quality coupled with a first-rate ashtray. Technically, it is not a Cortina or BMW and so much the better too. Further, the BMW tends to break-away far too suddenly and has its dated style to contend with. For the money, there is no better family saloon offering the same technical specification of the Giulietta, allied to best-in-class fuel consumption.