A decade ago, Alfa Romeo wowed the faithful with the 8C Competizione, a car which ultimately amounted to less than the sum of its parts. But weren’t we here before?

The philosopher, Jorge Agustín Nicolás Ruiz de Santayana y Borrás once essayed the line, “those who cannot remember the past are condemned to repeat it.” Following this logic, amnesia clearly runs as deeply within Alfa Romeo as blind optimism. The perennially crisis-ridden Italian car brand seems locked into a habitual cycle of hope and despair, with each new dawn promising that this time all will be different.

In 2002, Alfa were experiencing one of their all-too frequent crises, the business allegedly losing the Euro equivalent of £3m a day. Worse still, Alfa’s spiritual home and technical nerve centre of Arese in the outskirts of Milan was shuttered in a bid to stem the losses.

The same year, Alfa displayed the 8C Competizione concept at the Frankfurt Motor show and the serried ranks of grizzled press corps openly wept with gratitude. An almost wanton tug on the heartstrings, the centro stile styled 8C, overseen by Wolfgang Egger was an unabashed recasting of the stylistic tropes of the latter 1960s – particularly the Zagato bodied TZ and the T33 Stradale. Alfa Romeo, hitherto unremittingly modernist in style had rather belatedly entered the retro business.

In 2007, the 8C entered limited production, with 500 being built with another 500 Spider versions to follow. Based on Maserati underpinnings (chassis from the 3200 GT and suspensions from the GranTurismo) and with a 4.7 litre 450 bhp version of the Quattroporte’s Ferrari-derived quad-cam V8 under its sinuous bonnet, the 8C was intended to mark the beginning of Alfa’s fightback and the Biscione’s return to the US market.

For the 8C’s apparent chassis sophistication and carbon fibre body panels, it appears to have been something of an unsophisticated brute, as Autocar’s Matt Saunders discovered in 2007. “The chassis is at its best on smooth surfaces; over broken ones it’s much more foreboding. There’s plenty of traction, but a compromised ride leaves little room for bump absorption. At the limit, the 8C’s balance is a bit erratic too. You’re never 100 percent sure whether you’ll get understeer or razor-sharp turn-in at any given corner – it’s usually the former if bumps are involved, but not always.”

Fast, pretty and very quick, the Alfa nevertheless proved a thoroughly uneven proposition. Pondering whether it was worth the cost of an equivalent Ferrari, Saunders concluded; “As a piece of automotive artifice, yes. As a properly exciting supercar, maybe. As a thoroughbred machine for fast road driving, unfortunately not.”

The 8C appears to have amounted to something of a curate’s egg then, an accusation which has equally been levelled at its 50-year old ancestor, the 1967 Montreal. Another heart-stopping confection of a race-bred quad-cam V8 (Alfa’s own this time), a glamorous body shape, courtesy of carrozzeria Bertone, mated to the chassis / underpinnings of the 105 Giulia-series.

And therein lay the rub. The promise of those staggering Gandini lines and that thoroughbred power unit was betrayed by a chassis utterly under-qualified for the role. In 1997, auto-journalist, Andrew Frankel drove a well-fettled example for Autosport and found it sorely wanting. Frankel’s elegant prose deserves to be quoted in its entirety, but we’ll have to confine ourselves to a few choice nuggets. Equating the combination of body and engine to the theoretical marriage of Linford and Julie Christie, Frankel discovered Alfa’s V8 to be both thrilling yet tractable, but at the first sight of a corner, the Montreal’s ‘veneer of composure’ took flight.

“The first impression is that of a car with no front end grip at all. Right at the point when you need the front tyres to bite into the corner, they shy away, kicking your heart into your mouth as they do.” Not to put too fine a point on matters, the big Alfa’s dynamics were an inept combination of pitch, wallow, roll and the unsettled hip-hop of the Giulia-based live rear axle.

“It is a shame”, Frankel continued, “albeit not an entirely unexpected one, to note that the Montreal, is in the end, tripped and sent sprawling by its inadequate chassis. The Montreal”, he concluded, “would have served Alfa better if its shape had stayed in the exhibition hall, its engine in a racing car. It’s not as if the two weren’t meant for one another as I had previously thought, but rather that they were forced to live with an unworthy and unruly third party.”

It’s highly unlikely that Sergio Marchionne is a man with much time for the lessons of history; his slash and burn approach to brand management suggesting a disdain for such matters. This may explain why 2007’s 8C Competizione proved somewhat half-baked, if nowhere near as undercooked as its 1967 forebear. The 8C’s emotive (if creatively stagnant) styling however does suggest that Sergio’s cuore is not as flint-like as one might be tempted to imagine.

But there is another ghost at the wake. The same year the 8C was first shown to an enraptured public, Ital Design displayed the Brera concept at Geneva, a fabulously realised meditation on contemporary Alfa Romeo coupe style. Also featuring a Maserati engine and running gear, if ever a car deserved to see production as shown it was this – perhaps Giugiaro’s most accomplished piece of auto-styling in decades. 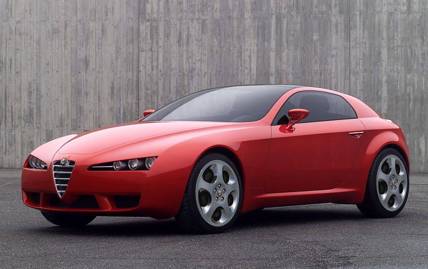 Produced it was of course, but like the Montreal, it was shoehorned onto a smaller and somewhat inappropriate platform, ruining Giorgetto’s exquisite proportions and compromising the car’s dynamics. And despite Brera acting as Alfa’s stylistic talisman for a few short years, (also informing the handsome 159 berlina), it was Egger’s tear stained homage to past glories that would become the scudetto’s face for a generation.

The lessons of the past stare what’s left of the Italian motor industry in the face for those who choose to face them. It’s going some to repeat the bitter reversals of history, not once but twice in rapid succession. But while Alfa’s lords and masters carry on as if they never happened, they’ll keep repeating the same errors indefinitely.

9 thoughts on “Anniversary Waltz 2017 : A History of Lessons”